“The worst thing that could ever happen to anybody has landed on you … and now you just have to deal with it.” And most of us, if we’re lucky, don’t have to deal with “the worst thing” alone. Richard Linklater’s moving “Last Flag Flying,” a quasi-sequel to Hal Ashby’s “The Last Detail,” is a film built on the deeply humanist career of its filmmaker, one that is about, at its core, what we’re willing to do for one another on our darkest days. It is about being there for people when they need a shoulder to cry on or a hand to help them get up. And it reflects Linklater’s undeniable belief in humankind. Is there any filmmaker who so clearly loves his characters more than Linklater? Jesse and Celine in the “Before” films; the kids of “Dazed and Confused” and “Everybody Wants Some!!”; everyone in “Boyhood”—Linklater’s affection for the people he presents is palpable, and it’s that graceful humanity that keeps “Last Flag Flying” from descending into melodrama. It dips a few too many times to stand with the filmmaker’s best work, and a few asides into “wacky old person behavior” are regrettable, but this is another solid dramedy from one of our best working filmmakers.

Larry ‘Doc’ Shepherd (Steve Carell) has had an absolutely horrific year. His wife recently passed of cancer, and he just received news that his son, Larry Jr., died in combat in Iraq—the film takes place in late 2003 (we see Saddam Hussein’s capture on TV screens). The news that Larry has to accompany his son’s body to Arlington has rattled him and he needs some people by his side to whom he hasn’t spoken in decades, his two Vietnam buddies, Sal Nealon (Bryan Cranston) and the Reverend Richard Mueller (Laurence Fishburne). Cranston is doing a loose riff on what Nicholson did in the original Ashby film, playing the rebellious, hard-drinking, tough-talking member of the trio; Fishburne is the now-religious man who hasn’t lost the passion of his youth, he’s merely channeled it into something else; Carell sometimes looks like a shell of a man, giving the most subdued performance, and one of the best, of his career. What follows is basically an actor’s showcase in the form of a road movie.

And it’s one heck of a showcase. Linklater has received ample credit throughout his career as one of our best writers, but his work with performers still feels underrated. Patricia Arquette, Ethan Hawke, Jack Black, Julie Delpy—Linklater has directed them to performances that would be on any highlight reel of their entire careers. And he does phenomenal work here as an actor’s director, allowing Carell, Fishburne, Cranston, and relative newcomer J. Quinton Johnson (as a soldier who has to accompany the men) to do fantastic, character-driven work. There’s great joy in watching actors this talented being given the space to develop their characters in such a way that the performer fades away and we only see the character. There’s a scene near the end in which the quartet is conversing on a train in which I realized how well-rounded and developed all four performers were in that moment.

Sadly, Linklater and co-writer Darryl Ponicsan (who also wrote the book and "The Last Detail") don’t always trust the truth of their situation, ladling on sitcom-ish asides that really grate, although none go on long enough to completely sink the film. The old guys getting confused for terrorists; going on an excursion to buy something mysterious called a cell phone; breaking down Eminem’s “Without Me,” which Sal is stunned to learn is sung by a white guy—these are all regrettable diversions from the truth of the film because they all feel so completely like a writer’s contrivances.

“Last Flag Flying” is far more interesting when it gets philosophical. There’s an interesting undercurrent of faith at play in this story—faith in a higher power that leads one into life as a Reverend or faith in a system that orders young men to die in impossible wars, and ultimately a faith in each other to do the right thing. I wish it was even more daring in terms of how this theme is explored, but it’s definitely there. I also wanted more examination of the individual vs. the institution, most reflected in the decision over whether or not to bury Larry in his uniform. Does the uniform represent the man who gave his life or the system that took it? And what about the flag? Again, I feel like there’s a slightly more daring, thematically strident version of “Last Flag Flying” that could have elevated this movie from good to great if it were willing to be just a few degrees more challenging.

Linklater doesn’t help the opinion some will have that this is a bit too manipulative with a score that hits the tinkly piano chords whenever emotion comes into the narrative, but I’d be lying if I didn’t admit to being moved on more than one occasion. Death comes into all of our lives. If we’re lucky, it doesn’t come into our lives when it comes to our own children. We’re not all so lucky. People very important to me are dealing with the injustice of death as I write this, and “Last Flag Flying” reminded me how essential it is to just be there for them in whatever capacity I can. One of the last lines of the film is “Doc needs us.” Linklater is reminding people to be present when they’re needed. Be aware. Be caring. Be truthful. Be alive. More than anything, just be human. 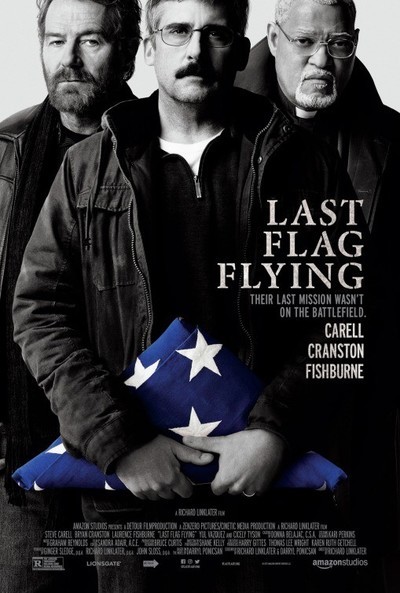