In 2013, a shocking discovery was made in the yard of a nondescript flat in Mansfield, England. It was there that the authorities found the bodies of the parents of Susan Edwards and learned that the average housewife and her average husband had shot them, burying them in the backyard and then hidden their deaths for years. As the couple drained their savings, they even pretended that Susan’s parents were still alive, sending Christmas cards and telling people that the missing pair were just on vacation. How did two very normal people commit such a horrifying act? HBO’s “Landscapers,” starting Monday and running for four weeks, seeks to answer this question. Well, sorta. Or maybe it just suggests you shouldn't ask it in the first place. It’s a more experimental and playful piece of work than a traditional true crime drama, centering two phenomenal performances in a project that almost deconstructs the concept of narrative as much as serve as an explainer for murderers. You are unlikely to feel like you understand Susan and Chris Edwards after watching “Landscapers,” but maybe it’s impossible to ever really do so.

Writer Ed Sinclair and director Will Sharpe (“The Electrical Life of Louis Wain”) assemble “Landscapers” as almost a series of experiments in form regarding motive and investigation. After all, we don’t know a lot about the Edwards, even though they became the subject of U.K. headlines after the bodies were discovered and the trial became a public event. The wonderful Olivia Colman and David Thewlis play the couple, a pair who bonded over a love of movies, particularly the work of Gerard Depardieu, and they brilliantly ground the pair in mundane normalcy. Chris and Susan were the kind of people who would never raise red flags with their neighbors. And yet there were clearly dark things happening the Edwards house. Susan mentioned issues of abuse by her father from a young age. And the couple reportedly felt cheated financially.

It’s not a lot for a four-hour mini-series. And so Sinclair and Sharpe play with structure to fill it out, particularly in the third, and best, episode, in which an interrogation breaks the fourth wall and becomes almost a commentary on this kind of series existing in the first place. Colman and Thewlis travel with detectives from set to set, revealing behind-the-scenes equipment, breaking down what happened as the investigators get closer to the truth. It’s a riveting sequence that layers the artifice of filmmaking on the retelling of history that happens when a confession finally emerges. In the final episode, Sinclair and Sharpe employ another clever structure as Chris and Susan imagine their lives as characters in one of the Westerns that they loved. The kind of hero that Susan saw in Chris—someone who could save her from a miserable life—always wins at least the moral victory in those movies.

Despite these clever choices, “Landscapers” is primarily a performance piece. Colman, who is simply one of the best working, imbues Susan with a combination of vulnerability and righteous indignation. She didn’t do anything wrong. Chris didn’t do anything wrong. Her parents were the villains in this movie, of course. It’s a clever, graceful performance. And she’s matched by Thewlis, who could have turned Chris into a bumbling idiot, but the actor smartly focuses on his dynamic with Colman. It’s a stretch to say it’s a love story, but Thewlis gives it an emotional throughline that other actors would have missed.

The only real problem I have with “Landscapers” is a common one of the Prestige TV era—this would have been an amazing dramatic feature. Despite the clever structural changes, there’s just not quite enough meat on the bones for four hours of television. As good as it can be at times, premiering during awards and holiday season on Monday nights, it’s hard to believe that this won’t get demolished as more prestigious shows dominate the TV landscape. 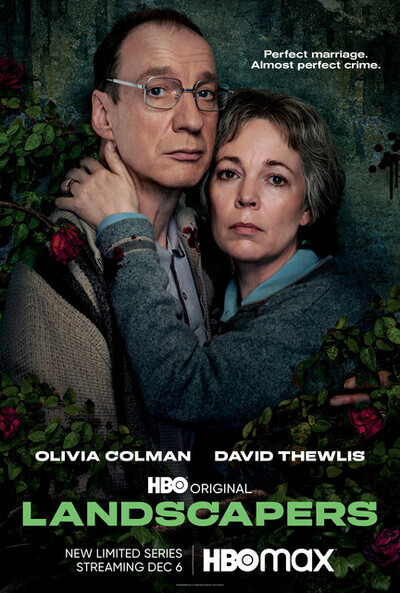