The Electrical Life of Louis Wain

"The Electrical Life of Louis Wain" has the same problem as its real-life subject, in that it goes off in too many directions at once. Benedict Cumberbatch, who also produced the film, plays Wain, a late 19th and early 20th century illustrator whose fanciful pictures of cats were so popular they helped inspire the widespread adoption of cats as pets. Contemporary viewers will enjoy the confused reaction when Wain tells someone he has a cat named Peter. "You mean as a mouser?"

Peter is a companion and a source of solace, as today's pet owners well understand. When Peter dies, Wain is inconsolable, weeping every day for years. His love for cats shines through his illustrations. H.G. Wells (a brief appearance by musician Nick Cave) said of those drawings, "Cats that don't look like Louis Wain's are ashamed of themselves."

Olivia Colman provides crisp narration, first giving us the context of the period and cheerfully overlooking, as she does so much else, the repressive and colonialist elements of the era: "Aside from its bizarre social prejudices, Victorian England was also a land of innovation and scientific discovery. Many of the world's finest minds were digging deep into the nature of electricity." But while scientists and inventors were trying to use electricity to illuminate darkness and operate machinery, Louis Wain believed that electrical forces are what pull us forward in time and help us hold onto our memories. He called electricity "the key to all of life's most alarming secrets." This idea helped inspire his pictures of cats, which became more stylized and kaleidoscopic, almost psychedelic, over the decades.

Today, we would call Wain neuroatypical. For example, he drew his intricate artwork with both hands simultaneously, each hand beginning at a side of the page, meeting up with perfect alignment in the middle. His interactions with other people had a blunt awkwardness that might be diagnosed today as on the autism spectrum.

He also spent his last decades in mental hospitals. Colman's narration tells us his mind was a "dark, screaming hurricane of crippling anxieties and recurring nightmares." Wain says that his constant, frantic activity was an effort to manage his mental chaos. Some contemporary experts believe he had schizophrenia and the increasing abstraction and fantasy of his images is evidence of a disconnect from reality. The movie depicts him having a terrifying hallucination that could be caused by psychosis.

He had a lot of external pressures as well. He was the sole provider for his "whimsical and bohemian" widowed mother and five "hungry and precocious" sisters, one of whom would become severely mentally ill, and none of whom contributed to the family's upkeep. Even after his work was very successful, his poor judgment and lack of understanding of money kept the family struggling and in debt.

The only moments of peace and true happiness for Wain were in a very sweet romance with his sisters' governess, Emily (a warm-hearted and witty performance by Claire Foy). Peter was a stray cat they adopted together. He was a great source of comfort as Emily developed breast cancer and became very ill. She was the one who told Wain that cats were "ridiculous, silly, cuddly, frightened and brave, just like us," and that inspired the beginning of his whimsical drawings of cats enjoying human activities, often gently making fun of the era's fads and fashions.

The cool cheeriness of Colman's narration and the postcard-pretty settings may be intended to give us a sense of Wain's mind, at least the part that imagined the whimsical world of his cats. But it makes for an awkward and sometimes insensitive depiction of the more tragic elements of the story. One scene is punctuated with a song on the soundtrack that is primarily "meow"-sounds. The result is an artificial tone that makes the fanciful cats more real to us than Wain himself.

Now playing in theaters and available on Amazon Prime on November 5th. 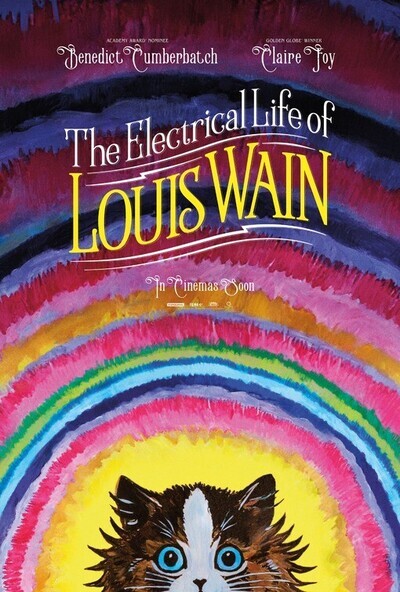 The Electrical Life of Louis Wain (2021)

Rated PG-13 for some thematic material and strong language.