Movies about men in states of arrested development are legion. They’re the reason Judd Apatow, Adam Sandler and others too numerous to mention have careers. In film after film, male actors riff on the asinine notion that “boys will be boys” while their understanding, far more mature female counterparts smile and eagerly wait for them to grow up. These characters are free to be hurtful, dangerous, horrible, mean and idiotic if they so desire. It’s all presented with the excuse of “hey, this is how dudes act.”

“Laggies” aims to flip the gender script, offering up Keira Knightley as Megan, an immature 29-year old wandering aimlessly through life. But since it can’t rely on blaming a Y chromosome for Megan’s affliction, “Laggies” is forced to either dive fearlessly into immaturity with her or stand on the sidelines to tsk-tsk. It chooses the latter, much to my chagrin.

Megan’s sense of humor is still 16, as is her sense of entitlement, and her friends are starting to outgrow her. Megan’s high school girlfriends are getting married, working at jobs, having children—you know, stuff adults do—and the mere notion terrifies Megan. She works as a sign-twirler for her dad (Jeff Garlin) and is still dating her sweet but dull high school boyfriend. When the boyfriend proposes to her at another friend’s wedding, Megan feels the hot breath of adulthood breathing down with a vengeance on her damn-near-thirty neck. Action is swiftly taken.

In an attempt to recapture her treasured adolescence, Megan runs off to join a circus of teenage girls. She first meets them outside a supermarket, where their leader, Annika (Chloe Grace Moretz), asks Megan to buy them some booze. Feeling a kinship to Annika’s underage dilemma, Megan pays it forward for all of the adults who once bought booze for her. Feeling a combination of mentor and peer, Megan even offers up suggestions on what the teens should imbibe.

Annika is impressed that the elderly (in her eyes, that is) Megan can still rock a skateboard, and the two become quick buddies. Annika gives Megan a cell phone, and before you can say “Friends and Framily,” Megan is crashing at Annika’s house for a week. To avoid suspicion, Megan tells her fiancé that she’s attending a career seminar out of town. During her stay, Megan proves useful to Annika for things like pulling one over on the school principal, and Annika returns the favor by making Megan feel like she’s still one of the cool high school girls.

But how, you may ask, does Megan live under Annika’s roof yet not get caught by her parents? Well, she gets caught—and a whole lot more—by Annika’s dad, Craig (Sam Rockwell). This is where “Laggies” starts to fall apart. Craig is a typical Rockwell role, cocky and arrogant. In his short screen time, Rockwell creates the most interesting character in Andrea Seigel’s debut screenplay. Watching him, you see the apple hasn’t fallen far from the tree. Annika possesses his sharp, snarky wit and his no-nonsense b.s. detector. His single dad relationship with his daughter is a ripe subplot waiting to be exploited, if only as a reminder to Megan of how aggravating adolescence can be. Yet Craig is strictly a plot device. The way he is eventually used is insulting to the character, Megan and the audience.

I cop to not being a fan of Lynn Shelton’s work. Her films fall apart in their third acts. Rather than simply crumble as they have in her prior work, the third act of “Laggies” implodes in grand fashion, spewing contrivances, bad clichés and an ending that is simply unforgivable.

With that said, Shelton does play to her strength with actors here. There isn’t a bad performance to be found. Of particular note is Moretz, who continues to impress by being one of the most giving actresses working today. “Laggies” was the third film of hers I saw at the Toronto Film Festival, and after watching her self-confident turn in the great “Clouds of Sils Maria” and her excellent diner table scene in “The Equalizer,” I’m convinced that few young actors today can match her ability to be so reliably present and charitable in moments with another actor. Her emotional moments here nourish the other actors’ responses, elevating everyone in the scene.

When the film ended, I asked “Why did Megan wind up here?” I’d consider the final scene an allowance for Megan to have not learned much on her journey, but “Laggies” is rarely on the side of her immaturity. Knightley, who is game for the darkness her role could contain, is never afforded the same agency a male version of her character would have. The film keeps forcing her to err on the side of likability, while hinting it does not support her actions.

In an amusing nod to the fact that teenagers are usually played in movies by people Knightley’s age, Craig immediately pegs Megan as “not a teenager.” He allows this sexy, strange woman to stay in his house for no reason I could deduce other than that he might be able to bang her. “Laggies” shows him to be the only “cool adult” in Megan’s world; everyone else is presented as needy or a drag for not having time to pursue the frivolity Megan so desperately craves. You'll want to run away from the adulthood “Laggies” promotes. The movie just doesn’t provide a credible place to escape. 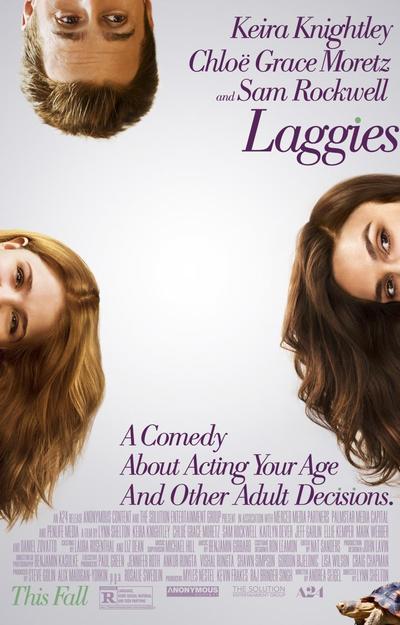 Rated R for language, some sexual material and teen partying