"Kramer vs. Kramer" wouldn't be half as good as it is -- half as intriguing and absorbing -- if the movie had taken sides. The movie's about a situation rich in opportunities for choosing up sides: a divorce and a fight for the custody of a child But what matters in a story like this (in the movies and in real life, too) isn't who's right or wrong, but if the people involved are able to behave according to their own better nature. Isn't it so often the case that we're selfish and mean-spirited in just those tricky human situations that require our limited stores of saintliness?

"Kramer vs. Kramer" is about just such a situation. It begins with a marriage filled with a lot of unhappiness, ego and selfishness, and ends with two single people who have both learned important things about the ways they want to behave. There is a child caught in the middle -- their first-grader, Billy -- but this isn't a movie about the plight of the kid but about the plight of the parents.

Hollywood has traditionally approached stories like this from the child's point of view, showing him unhappy and neglected by the grownups -- but what if the grownups aren't really grown up? What about a family in which everybody is still basically a kid crying for attention and searching for identity?

That's the case here. The movie stars Dustin Hoffman as a workaholic advertising executive whose thoughts are almost entirely centered around his new account -- so much so that when he comes home and his wife announces she's walking out on their marriage, he hardly hears her and doesn't really take her seriously. But his wife (Meryl Streep) is walking out. She needs time to find herself, she says; to discover the unrealized person she left behind when she went into the marriage.

Right away we're close to choosing sides and laying blame: How can she walk out on her home and child? we ask. But we can't quite ask that question in all sincerity, because what we've already seen of Hoffman makes it fairly clear why she might have decided to walk out. She may be leaving the family but he's hardly been a part of it. Harassed, running late, taking his son to school on the first day after his wife has left, he asks him: "What grade are you in?" It's the first. Hoffman didn't know.

The movie leaves Streep offscreen during its middle passages, as Hoffman and the kid get to know each other, and as Hoffman's duties as a parent eventually lead to his firing at the ad agency. These scenes are the movie's most heart-warming. The movie's writer and director, Robert Benton, has provided his characters with dialog that has the ring of absolute everyday accuracy, but in the case of the kid (the young actor is named Justin Henry), he and Hoffman reportedly decided to use improvisation where possible.

Situations are set up and then the young boy is more or less left free to respond in his own words, with Hoffman leading and improvising as well, and many moments have the sense of unrehearsed real life.

What that means is that we can see the father and son learning about each other and growing closer. Another movie might have hedged its bets, but "Kramer vs. Kramer" exists very close to that edge where real people are making real decisions. And that's true, too, when the movie reaches its crisis point: when the Streep character returns and announces that now she feels ready to regain custody of her son.

By now we have no inclination at all to choose sides. Our sympathies do tend to be with the father -- we've seen him change and grow -- but now we are basically just acting as witnesses to the drama. The movie has encouraged us to realize that these people are deep enough and complex enough, as all people are, that we can't assign moral labels to them.

"Kramer vs. Kramer" is a movie of good performances, and it had to be, because the performances can't rest on conventional melodrama. Dustin Hoffman's acting is about the best in his career, I think, and this movie should win him an Academy Award nomination and perhaps the Oscar. His performance as Ratso in "Midnight Cowboy" (1970) might strike some people as better than this one, but he had the advantage there of playing a colorful and eccentric character. This time he's just a guy in a three-piece suit, trying to figure out the next 24 hours. One of his best scenes comes as he applies for a job during an ad agency's office Christmas party, and insists on an immediate decision.

Meryl Streep has certainly been having quite a year, and has appeared in what seems like half the year's best female roles (so far she's been in "The Deer Hunter," "The Seduction of Joe Tynan" and "Manhattan," and "Holocaust" on TV). In "Kramer vs. Kramer," Benton asked her to state her character's own case in the big scene where she argues for her child from the witness stand. She is persuasive, but then so is Jane Alexander, who plays her best friend, and whose character is a bystander and witness as Hoffman slowly learns how to be a father.

This is an important movie for Robert Benton, who co-wrote "Bonnie and Clyde" and also wrote and directed "Bad Company" and "The Late Show." He spends a great deal of attention on the nuances of dialog: His characters aren't just talking to each other, they're revealing things about themselves and can sometimes be seen in the act of learning about their own motives. That's what makes "Kramer vs. Kramer" such a touching film: We get the feeling at times that personalities are changing and decisions are being made even as we watch them. 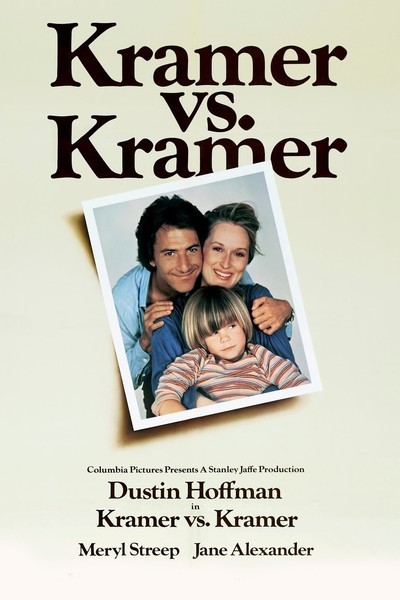