The franchise-style espionage thriller has long been ripe for a sendup, or a pastiche, or an update, or whatever the hell people think it’s ripe for. The comic book “Kingsman” provided the basis for 2015’s “Kingsman: The Secret Service,” a blockbuster sized action picture with, ostensibly, a cheeky attitude not unlike that of “Kick-Ass” (also directed by Matthew Vaughn). For many, that movie filled the sendup/pastiche/update bill quite nicely. Instead of an official intelligence industry, the secret agent outfit Kingsman, operating out of a high-end tailor’s shop, is a privatized law-enforcement security service with a lot of high-tech weaponry and convoluted cutting-edge tech protocol.

The true tell in the first film was the character of Gazelle, a henchperson of the main villain, a woman whose prosthetic legs are sharp knife edges. With these she can amputate limbs, and even cut a man entirely in half. These mutilations were depicted in a sterile, near analgesic fashion; the audience is meant to titter at the loss of life and limb delivered so efficiently, with no pain, no mess. Similar dismemberments and body halvings are delivered in the sequel, “Kingsman: The Golden Circle.” It’s violence for cowardly voyeurs who want to make the people who annoy them just shut up in a way that’s silent, sterile, and thoroughly humiliating to the victim.

But the movie was successful, so now there’s the sequel, cooked up in the script department by director Vaughn and Jane Goldman. If you think having a woman co-writing the screenplay will help in the egregious gross sexism department you are mistaken; one of this movie’s “gags” involves putting a tracker on a villain’s girlfriend by means of a form of sexual assault the current president of the United States once bragged about. Eggsy performs this act reluctantly, we are meant to understand, in part because he is now in a committed relationship with the Swedish Princess who gifted him with anal sex in the first movie.

“Kingsman: The Golden Circle,” which finds the British tailors decimated and forced to join forces with a whiskey manufacturing U.S. spy network called “Statesman” and featuring such personages as Channing Tatum, Jeff Bridges and Halle Berry, is even longer than the first movie, clocking in at two hours and 20 minutes or so. As action-packed as the movie is, it feels like it’s six hours. That’s in part because the pacing is so spavined; the movie lurches twitchily from set piece to set piece and spends inordinate amounts of time on shots of its sharp-dressed characters slow-motioning into the widescreen frames showing off accessories that will be sold to you by various companies in various Kingsman tie-ins all over the Internet. (A scene wherein Firth is packing up his things finds the actor taking special care to make sure the wooden Art of Shaving soap dish is turned to the camera lens. In recent weeks, I’ve received no less than a dozen e-mails from Art of Shaving, all tied in to “Kingsman.”)

It also feels long because every bit or joke is dragged out long past its funniness or shock value. The plot here, just as reactionary in its way as that of the first one, centers around a drug cartel, the Golden Circle, run out of a jungle presided over by Julianne Moore’s Poppy. (I hope the producers of this movie paid Moore an inordinate amount of money, because all she gives them in return for her fee is a passable Megan Mullally impersonation, which is still less than they deserve.) Poppy’s very rich and powerful but also isolated and lonely, so she’s kidnapped Elton John and is forcing him to perform solely for her. Elton John is played by himself. This is funny at first, then sour, then gets beaten worse than a dead horse as Sir Elton is made a plot point and a climactic action sequence is played out over one of his more raucous numbers. “Enough,” one thinks, but “enough” does not exist in the philosophy of this movie.

Well, I suppose it does in one respect. In “Kingsman: The Secret Service,” villain Valentine, played by Samuel L. Jackson, inveigled various world leaders into going along with his twisted save-the-earth doomsday scheme; he then implanted a device in their necks that, unbeknownst to them, could blow up their heads if triggered. One of the world leaders was meant to be taken for then-President Barack Obama. And at the movie’s ending, all the head-exploding devices were made to go off, and the audience was invited to guffaw at the spectacle of Barack Obama’s head blowing up. This movie’s plot hinges on tainted drugs that will kill, potentially, all the world’s substance abusers. The scheme, initiated by Moore’s character, is reported by Fox News, none of whose correspondents are shown to have the sign of the taint. Because no one who works for Fox News does drugs, as we know. This movie also features a United States President, but not a real one, as the last film did; this movie’s president is white, and played by Bruce Greenwood. It’s probably just a coincidence that this movie is produced by Fox. It probably means nothing that this movie, made by people who invited you to laugh at the violent death of the United States’ first black president, won’t touch Donald Trump with a ten-foot pole. They can’t be racist, right? They cast Halle Berry in this movie and Samuel L. Jackson in the last. They approve of black actors at least.

Speaking of actors, this is a movie that makes you wonder about them as a class. Can Colin Firth, Channing Tatum, Mark Strong, Jeff Bridges, Poppy Delevingne, Julianne Moore, Michael Gambon, and so many others in the cast be themselves as soul-dead and life-hating as this movie? If not (and it’s probably, or at least hopefully, not) who do we blame? Their agents? The whole bloody system that’s out of order? 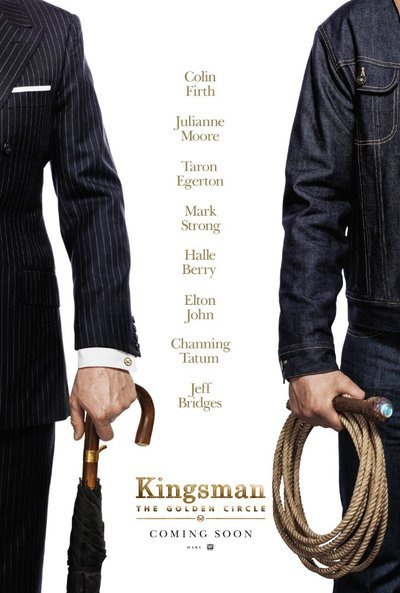 Rated R for sequences of strong violence, drug content, language throughout and some sexual material.