Involving softcore prurience in the areas of both sex and violence, “King Cobra” is a type of film that’s been around at least since content restrictions on movies were relaxed in the late ‘60s. In that era, they played mainly in grindhouses. It was in the ‘80s that they really took off; though fewer played theaters, legions were prime grist for the mills of cable and home video. Apart from the occasional sensationalistic curiosity like William Friedkin’s “Cruising,” few involved studios, big budgets or stars.

As an example of today’s variety, “King Cobra” smells more like business plan than a movie. It’s hard to get feature films made at any time, but with the enormous changes the film/TV world is going through currently, it’s unusually tough now. For a low-budget filmmaker, having a steamy script is one asset. But even better is using that to attract actors who probably wouldn’t have considered such a project in decades past.

Kelly’s film has four name actors in its cast. Three of those—Christian Slater, Molly Ringwald and Alicia Silverstone —once had big Hollywood careers going. Not too many years ago, all might have been visible presences even after their stars had dimmed. But at a time when Hollywood makes few movies besides big cartoon franchises, an actor’s options are fewer and fewer, to the point that even a “King Cobra” is worth considering.

That’s how they fatefully connect with Brent. He’s finally realized how much he’s been exploited by Stephen and left him. At first blush, the future seems golden; everyone wants to make porn with the twink superstar. But there’s a hitch: producers want him under the name Brent Corrigan, which belongs to Stephen, who threatens legal action unless the star returns to his fold. Once psycho duo Joe and Harlow hear of this obstacle to their filmmaking plans for Brent, all signs point toward the gore and mayhem that such true-crime tales (this one’s supposedly based on an actual incident) usually entail.

Even by its own lower-rung standards, “King Cobra” can’t be considered a seamless piece of work. Until they converge over an hour into the film, the two main story strands are jarringly different in tone: the Brent/Stephen section mostly standard melodrama mixed with some softcore action, the Joe/Harlow parts overheated psychodrama/satire spiced with sex that’s about as raw as you get this side of hardcore. The writing, though, contains some funny lines (“Who ever heard of a paid intern?”) and nice satiric jibes.

Not surprisingly, the film’s strongest suit is the acting. Newcomer Clayton makes a strong impression as the gorgeous and eventually wised-up Brent. Allen turns in solid work as the put-upon Harlow, while Franco, Ringwald (as Stephen’s sister) and Silverstone (as Brent’s mom) are very much up to their respective tasks. Best of all, though, Slater gives Stephen a real sense of inner conflict and desperation: some soul beneath the sleaze. A real film would’ve had a lot more of that. 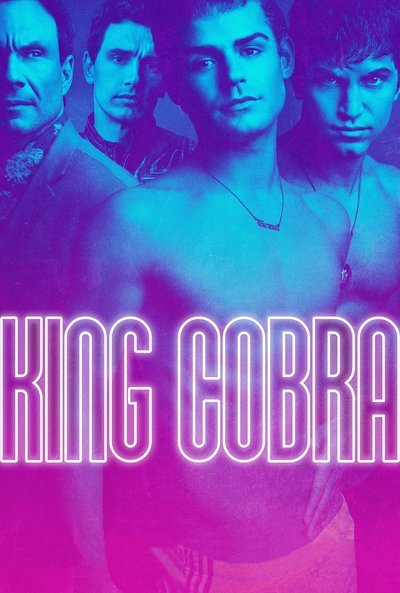