Even though their collective star power has dimmed a bit in the last few years thanks to some ill-advised screenplay choices, one might rightly assume that a movie co-starring Robert De Niro and John Travolta would be considered a reasonably big deal. However, the new war drama "Killing Season," in which they appear together for the first time, was only dribbled out into a handful of theaters, presumably a contractual obligation connected to its upcoming home video release. Considering that the two stars have, to put it charitably, made more than their fair share of terrible movies over the last few years, one might wonder how bad a film with them would have to be to get swept under the rug so completely. As it turns out, the film is quite awful—badly written, ineptly staged, horribly acted, historically suspect and boring beyond belief—and fully deserving of its ignominious fate.

Benjamin Ford (De Niro) is a career soldier who is now spending his retirement in virtual isolation in his cabin in the woods, where he takes nature photos, listens to Johnny Cash albums and struggles to forget the horrors that he experienced while in the field. One day, he suffers car trouble and is aided by Emil Kovac (Travolta), a Bosnian who is in his neck of the woods on a hunting expedition. When a rainstorm erupts, Ford invites Kovac for dinner and, after bonding over booze and the Man in Black, Kovac reciprocates by inviting Ford to go on his hunt with him the next day.

The next day, they go out but Ford quickly discovers that the prey Kovac really has in mind is not an elk but him. It turns out that Kovac is really a Serbian war criminal who was captured and supposedly executed by Ford and his fellow NATO troops after they liberated a Bosnian internment camp that he was helping to run. Having survived the bullet Ford put in his back, Kovac has finally tracked him down and now wants to go after him in a fair fight in order to get revenge and exorcise his demons about the conflict.

In the right hands, this could have resulted in a smart, complex and tough-minded film combining gripping action and a meditation on man's eternal desire for conflict and how the physical and psychic wounds of those who partake in war continue to fester long after the cessation of hostilities. Instead, the film quickly devolves into a grotesquely violent and generally idiotic revenge film in which one of the two gets the upper hand on the other, tortures him for a few minutes in an exceptionally gruesome or silly manner (including waterboarding with a pitcher of lemonade made with salt instead of sugar) until he makes a stupid mistake that lets the other escape and take his turn. Imagine a cross between the old "Spy vs. Spy" feature in Mad Magazine and the lesser "Saw" movies and you can get an idea of what the end result is like.

The biggest mystery about "Killing Season" is that, despite its lack of real dramatic conflict or any particular insights on the horrors of the Serbian-Bosnian conflict (the latter is perhaps not that much of a surprise seeing as how Evan Daughtrey's screenplay apparently was originally written about WW II participants), it still managed to attract actors of the caliber of De Niro and Travolta to take on roles that might otherwise have been filled by the likes of Nicolas Cage and…okay, Nicolas Cage again in an exceptionally odd double role. As he has done so many times in recent years, De Niro coasts through his part with just enough dramatic exertions to ensure that he receives his paycheck—not even an arrow shot through his leg is enough to inspire much of a reaction out of him. He makes so little of an impression that one could almost forget that he was in the film and my guess is that he would have no problem with that.

If De Niro hardly makes any effort at all, Travolta fully and completely commits to his performance, a move that would be laudable if it were not for the fact that the end results are so laughably bad. He is trying to come across as both charming and monstrous but is unable to pull off such a tricky tightrope act. Matters are not helped by the hilariously unconvincing Serbian accent that he deploys so insistently and ineptly throughout. To make things worse, Travolta has also been outfitted with the kind of goofy facial hair that makes one long for the comparatively slick grooming that he displayed in "Battlefield Earth." How bad is it? At one point—don't ask how—he gets an arrow shot through his face and most viewers would consider it a marked improvement.

In the end, "Killing Season" may not be the worst movie that either De Niro or Travolta has ever done—compared to the truly execrable likes of "The Big Wedding," it will not even go down as the worst De Niro film of 2013—but that does not make it any less awful. Cheaply made, dramatically inept and staggeringly dull despite a running time that only clocks in at maybe 80 minutes tops before the end credits begin, it is so devoid of passion, energy and intelligence that it makes one wonder why those responsible even bothered to make it in the first place. Unless you are a De Niro or Travolta completist, there is no reason to waste any time and money on this one. If you are a completist, you would be better served staying at home to watch the likes of "Righteous Kill" or "Moment by Moment" instead. 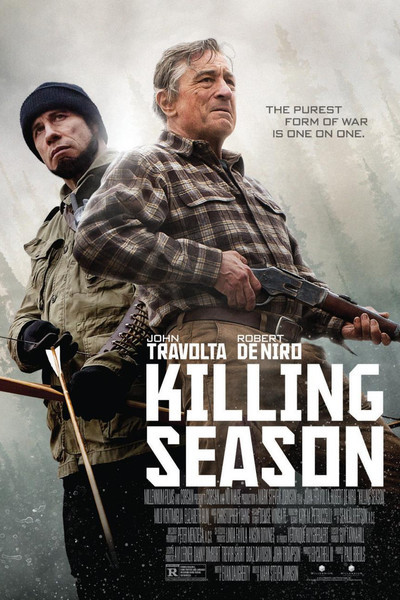