"The Big Wedding" is a sleepy sex farce about stock characters who find themselves in clichéd situations due to circumstances too hackneyed to mention. The movie is bland hackwork; its crime isn't incompetence, but indifference.

The youngest of Keaton and De Niro's three children is a Colombian adoptee named Alejandro (Ben Barnes, an Englishman in heavy make-up). He's getting married to a nice Irish Catholic girl (Amanda Seyfried) with cartoonishly disgusting parents; her father is a smarmy embezzler, and her mother is a plastic-surgery-addicted bigot.

Alejandro has remained in contact with his biological family, and invites them to come to the titular wedding — which, truth be told, isn't really all that big. Contrived hijinks ensue.

There are lame culture-clash jokes. There is projectile vomiting. There are two different erection gags. There are yawn-inducing plot twists and revelations. There is a pseudo-incestuous subplot that involves Keaton and De Niro's oldest son (Topher Grace) trying to lose his virginity to Alejandro's biological sister (Ana Ayora). There's a priest (Robin Williams) saying all kinds of un-priestly things. There is, in other words, a lot of "humor," very little of which is funny.

"The Big Wedding" is a 90-minute comedy with a lot of plot and many major characters that still manages to be a slog. Why? It's not the over-familiar material — a talented cast (and "The Big Wedding" certainly has one) can make tired jokes seem zippy. The problem is a lack of effort. No one involved in making "The Big Wedding" seems to have tried very hard.

Take, for example, the opening, where Keaton accidentally catches De Niro and Sarandon going at it. The scene is overlong. Its raunchy humor falls flat, in part because almost all of De Niro's dialogue has been dubbed in — much of it very poorly.

Much about "The Big Wedding" suggests laziness and indifference. The sound is routinely awful — bad dubbing, mismatched room tones. There is bad green screen work — which is a sort of perverse achievement, considering that this isn't a movie that calls for any kind of special effects. The scene that introduces Robin Williams' character begins with an establishing shot of a church — clearly stock footage, shot on consumer-grade video.

That's right: "The Big Wedding" is a movie about a Catholic wedding with several scenes set inside of a church where no one thought that it was worth the effort to photograph the exterior of the church. Not only that, but no one thought that it was worth it to buy stock footage that would blend in visually with the rest of the movie, or would at least look decent on a big screen.

You're probably wondering why I'm giving this movie one-and-a-half stars instead of just one. It's because of the cast. No one in the film delivers what you'd call a committed performance, but they don't completely embarrass themselves either.

Even at his laziest, De Niro still has a credible charisma, and he and Keaton make a convincing ex-couple. Topher Grace — always better as a character actor than as a leading man — has good comic timing and a natural rapport with Katherine Heigl, who has the thankless task of playing the movie's most boring character. Robin Williams is surprisingly tolerable. Ben Barnes is fine if you imagine that his character is addicted to spray tanning ("The Big Wedding" is a remake of a Franco-Swiss film called "My Brother is Getting Married," in which the adopted son character was Vietnamese; I'd hate to find out how this production would've handled that). Amanda Seyfried and Susan Sarandon are both decent, albeit underused.

When it all comes down to it, however, "The Big Wedding" is a movie in which no one felt compelled to do a good job — which is exactly why no one should feel compelled to see it. 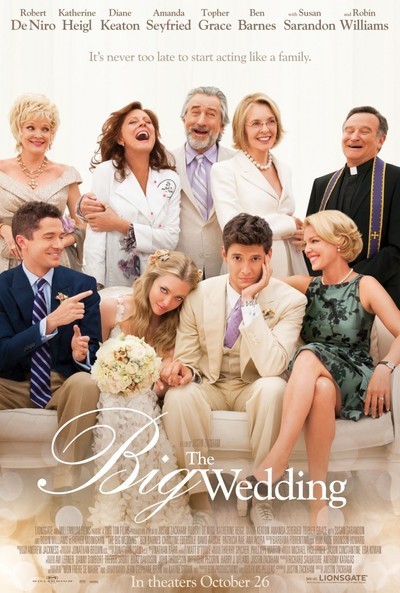