“Kids Vs. Aliens” comes to theaters and VOD unrated. But had the film’s producers gone through the (largely unnecessary in the streaming era) process of submitting it to the MPAA, the second feature from director Jason Eisener would join a proud tradition: That of the R-rated kids’ movie. Think of the “Child’s Play” franchise. Think of Full Moon Features. Think of anything that has the manic energy and bright patina of a movie for children, but with swearing and violence.

These types of films generally appeal to overgrown kids, which is not an insult—indulging the child within can be psychologically healthy (in moderation, of course). And they must be a lot of fun for kids who act in them, too: Imagine being ten years old and having a bunch of adults telling you that not only is it okay, but that’s it’s your job to yell, “F**k space!” while setting off fireworks. That type of joy is infectious. And indeed, “Kids Vs. Aliens” is a lively—if at times headache-inducing—experience.

This was clearly a DIY production, and most of the film’s budget seems to have gone towards making it as colorful as possible. It’s money well spent, as the in-your-face aesthetic at least partially compensates for the thin plot and cardboard characters. (The dialogue is crude as well, but that fits the overall tone, so it’s not as big of a deal.) Clocking in at 75 minutes, “Kids Vs. Aliens” feels more like a pilot episode than it does a fully realized feature film, not least because there’s more plot implied in the last 30 seconds than actually unfolds in the first 30 minutes.

That first half-hour is spent setting up the characters, namely rambunctious preteen Gary (Dominic Mariche) and his teenage sister Samantha (Phoebe Rex), who—in another grand genre-movie tradition—are left unsupervised nearly all of the time by their workaholic parents. Technically, Samantha is in charge. But she’s a big kid herself, with interests that include cool swords and pro wrestling. And she enthusiastically participates in the movies that Gary and his pals Jack (Asher Grayson Percival) and Miles (Ben Tector) are always cooking up in a barn on Gary and Samantha’s family property. That is, until brooding bad boy Billy (Calem MacDonald) comes along.

“Kids Vs. Aliens” takes a childlike view of Samantha’s subsequent turn into teen angst; in this movie’s mind, growing up means smoking cigarettes, wearing lots of eye makeup, and abandoning your true friends and interests. The moral dimensions of the plot are simplistic as well: Billy is an unequivocal villain—all of the teens in this movie except for Samantha are sociopaths, actually—and the movie reflects Gary’s hurt feelings about what he sees as his sister’s betrayal. She does get a chance to redeem herself, however, when the aliens belatedly show up halfway through the movie.

The extraterrestrial threat has a Halloween-store aesthetic, which is fine because this movie never claims realism during its runtime. The gore, when it does ramp up, plays like Fulci in fast-forward, melting bodies into piles of orange and yellow goop like neon Alka-Seltzers. (A couple of kids also get slimed, a fun nod from this Canadian production to the iconic Canadian series “You Can’t Do That on Television.”) At this point, all the yelling and strobe lights start to make sense. Before, they felt more like a toy truck with flashing lights and sound—again, great for kids, but best in small doses for anyone old enough to drive.

“Kids Vs. Aliens” is Eisener’s first full-length film since “Hobo with a Shotgun” in 2011. And the difference in tone between the two films shows how much has changed in pop culture since then. “Hobo with a Shotgun” was part of the “neo-grindhouse” movement that came along in the wake of Quentin Tarantino and Robert Rodriguez’s “Grindhouse” in 2007, a cynical and often mean-spirited wave of films that took puerile pleasure in pushing the boundaries of sex and violence on screen. In keeping with our current “poptimistic” age, “Kids Vs. Aliens” keeps the aggressive neon splatter, but loses the cynicism—a choice that, for all the F-bombs and fake blood, makes it a surprisingly pure film. 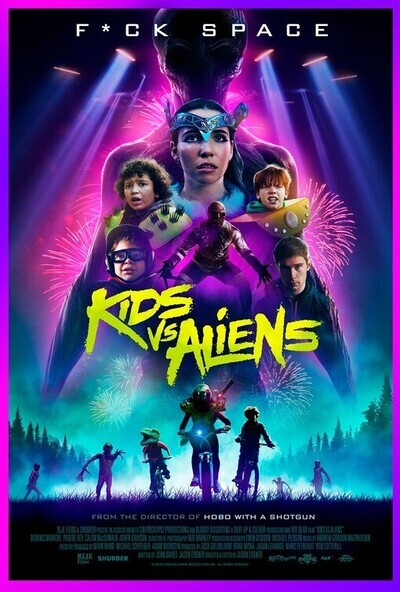