Although the summer of 2015 has proven to be a largely disappointing season in terms of cinematic achievements for the most part, one definite bright spot has been the gradual reemergence of feature animation as a viable art form after a few years in which the genre has been largely dominated by increasingly formulaic and largely forgettable works that have done little more than fatten up the bottom lines of the studios behind them. After a depressing lapse in quality with films like "Cars 2" and "Monsters University," Pixar finally returned to form with the ingeniously creative and flawlessly executed "Inside Out." Aardman, the studio that gave us the adventures of Wallace & Gromit and "Chicken Run" has similarly returned with "Shaun the Sheep," which has been winning rave reviews from critics. Now comes "Kahlil Gibran's The Prophet," a wildly ambitious and frequently fascinating film that moviegoers of all ages should find both entertaining and provocative in equal measure.

The film is based on the book of the same name by Lebanese writer/philosopher Gibran. In it, the prophet Almustafa is about to board a ship that will take him home after 12 years away when he is stopped by a group of people and proceeds to discuss a number of topics related to the human condition in the form of 26 prose poems. Since its initial publication in 1923, the book struck a chord with readers and became both Gibran's best-known book and a steady seller to this date that has never gone out of print. One of the book's most famous fans was actress Salma Hayek and even though a collection of prose poems on such subjects as crime and punishment, beauty, religion and clothing might not seem like the most fertile source of material for a film, she has spent the last decade bringing it to the screen as an animated film, serving both as a producer and as one of the character voices.

To realize Gibran's ideas in a fresh and visually vibrant manner, Hayek and writer-director Roger Allers, who previously co-directed a little thing called "The Lion King" back in the day, have hit upon a fairly ingenious concept. They have taken eight of the most popular poems in the book and have farmed them out to eight of the most innovative independent animators working today to interpret in their own distinct styles while the works are read by Liam Neeson. Bill Plympton brings "On Eating & Drinking" to life utilizing his hand-dawn style, an approach also adopted by Italian animators Paul and Gaetan Brizzi in "On Death." On the other hand, Mohammed Saeed Harib employs watercolors for "On Good & Evil" and "On Love," done by "The Secret of Kells" animator Tomm Moore. It looks like a painting come alive. Although different viewers will have different rankings for the various segments, it seems impossible that "On Work," the visually extraordinary segment by clay-painter Joan Gratz will not rank towards the top of them in the way that it combines Gibran's powerful words with equally stunning imagery.

In tying these flights of fancy together, Allers has considerably reworked the narrative wraparound with mixed results. Here, Mustafa (Neeson) is a dissident who has been under house arrest for years in the town of Orphalese and who befriends Almitra (Quvenzhane Wallis), the largely silent but occasionally troublemaking daughter of the woman (Hayek) who serves as his housekeeper. One day, the authorities announce that Mustafa is going to be sent back to his homeland at last but even as the population of the town comes out to joyously see him off, there is the sense that there is more to this seemingly benevolent decision to let him go than meets the eye and this gives his subsequent recitations an extra edge of importance. The trouble is that these sequences are at times a little too cartoony for their own good and while they may appeal to younger viewers who are not quite ready to grapple with the headier ideas regarding how dangerous mere words can be to the social order, older audience members will find themselves waiting impatiently for the next visual poem to begin.

That is a problem but not a major one (if only because the animation, though more conventional in nature than in the feature segments, is still nice to look at) and "Kahlil Gibran's The Prophet" still has a lot to offer viewers—visual astonishments, a stirring score by Gabriel Yared that also includes original songs by Damien Rice and Glen Hansard & Lisa Hannigan and strong contributions from the vocal cast that, in addition to those already mentioned, also features John Krasinski, Frank Langella and Alfred Molina. For Hayek, this is a personal triumph on the level of her equally dedicated efforts to bring "Frida" to the screen. For viewers, it is a smart, vibrant and ultimately entertaining film that also serves as a reminder that animated feature films can do so much more than serve as commercials for toy lines and fast-food meal tie-ins. 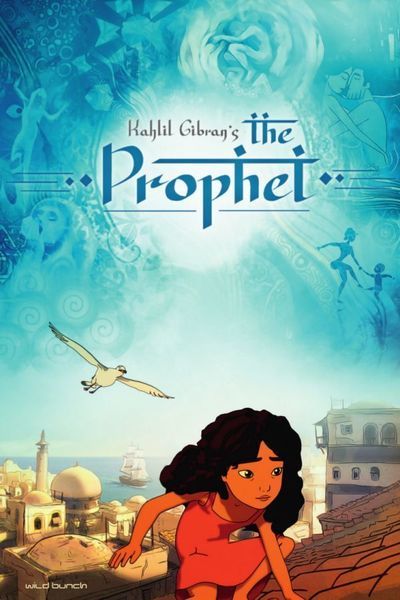 Rated PG for thematic elements including some violence and sensual images