In Pascual Sisto’s piercing directorial debut “John and the Hole,” a dark and inventive psychodrama pitched on the vanishing borders of adolescence, 13-year-old John discovers a bunker somewhere in the woods that surround his upscale New England home. That’s the foundation of the film’s title for you in a nutshell, in the most verbatim sense.

But there is also a metaphoric facet of the titular hole, one that represents something more than the deep ditch the frosty kid stumbles upon one lazy afternoon, thanks to an expensive drone gifted to him by his dad. There seems to be a gaping abyss in John’s soul where his conscience and youthful bliss ought to be. As Sisto tails John in the film’s first act through a disciplined and thrillingly open-ended screenplay from Nicolás Giacobone (the Academy Award-winning scribe of “Birdman”), we detect the disquieting void on his frosty, brick-wall of a face and detached voice, with an escalating sense of alarm.

Portrayed in a mature, stunningly enigmatic breakthrough performance by Charlie Shotwell (the young actor’s impressive resume to date already includes the likes of “The Nest,” “All the Money in the World” and “Captain Fantastic”), John struggles with this emptiness in eerie ways, whether he is aware of it or not. He asks odd questions for his age. Along with his best friend Peter (Ben O’Brien), he plays death-centric games in the pool an awful lot. Be it during his tennis lessons or school classes, he looks engaged only on the surface, just enough to fly his overarching numbness under the radar. By all accounts, John appears to be coddled by a loving family consisting of his parents Anna and Brad (Jennifer Ehle and Michael C. Hall) and sister Laurie (Taissa Farmiga), a trio that wouldn’t be all that out of place in a sunnier version of a Yorgos Lanthimos movie. Not exactly a deeply attentive bunch, they still seem attached to one another, even though they can’t see John’s peculiar psychological struggles brewing just beneath the surface.

Maybe John is just bored to tears of his easy, problem-free, affluent life—after all, Sisto amply critiques the kind of apathy wealth brings along throughout the film. Or perhaps he just wants to fill the hole in his heart; the inexplicable hollowness he can’t help but feel. All the same, he decides to trap his nearest and dearest in the literal hole that he’s found and taste freedom for a while on his own terms. A lesser film didactic about its themes would have made a murderer out of this character, sending him off to the kind of crime spree that would occupy the news cycle for months in the real world. Were there any warning signs? Why didn’t anyone do anything sooner? Who’s to blame? But not “John and the Hole” fortunately. John doesn’t pick up a weapon to seek retribution for any arbitrary wrongs from his charmed life. He instead watches his unsuspecting victims as they wake up one chilly morning, only to realize that they have been drugged and carried to the bunker by their youngest. John looks down on Anna, Brad, and Laurie with chilling indifference, like they are his old toys stuffed in a storage box he’s ready to stash in the attic. They shout. They ask for help. But their privileged bubble is so carefully designed for seclusion and privacy that not a single soul hears the family’s desperate plea.

But wait ... how exactly did John carry the three to the woods and manage to put them down in the hole all by himself? Good question, but one you should not worry about within the film’s silently arresting, fable-like logic. Thankfully, that proves to be more than easy to do—with shrewd stylistic touches both literal and allegorical, Sisto and Giacobone build such a meticulous, crafty, and well-paced film of undidactic morals around John’s symbolic act that you surrender to it at once. A kid who’s always been a little off until then, John abandons all sense of balance in the following scenes, leading irresponsible days that were described as “'Home Alone' by way of Michael Haneke” by 2021’s virtual Sundance Film Festival, where Sisto’s film premiered. An installation artist with distinctive ideas around architecture, negative space, and composition, Sisto earns this succinct comparison as John uncannily tries to accelerate his journey to adulthood. He cooks risotto in one scene, after munching on junk food for a while. In another, he attempts to make the subtlest pass at one of his mom’s friends who suspiciously makes inquiries about John’s family’s whereabouts. The neat world around him crumbles in due course, with clutter and trash piling up in every corner of his once orderly, tastefully minimalist home of tall windows and open spaces. Elsewhere, the trapped trio try to invent ways to escape, barely holding it together with the scrapes of food that John spares. Among the film’s most gripping scenes, the segments down in the bunker infuse the movie with flashes of humor and philosophical insight. You can’t help but root for the bunch.

Sisto works with a boxy aspect ratio for the entirety of “John and the Hole”—an increasingly popular, often superfluous visual construct that feels annoying in the likes of “Lucy in the Sky” and “Homecoming.” Except, this filmmaker makes the alienating narrowness of the frame feel essential to his picture, as it wraps around the movie’s lean, sterile, and soothingly geometric production design. Along with his cinematographer Paul Ozgur who captures the story with clean lines, muted (but not drab) colors, and surveillance-y shots that purposely keep one at arm’s length, the director summons a combustible sort of feeling here. It is one he smartly doesn’t detonate, overexplain, or overstuff, even when his story takes an abrupt detour at one point via a pair of new characters. It’s exciting, quietly volatile stuff that digs refreshingly deep into the fears of the coming-of-age genre. 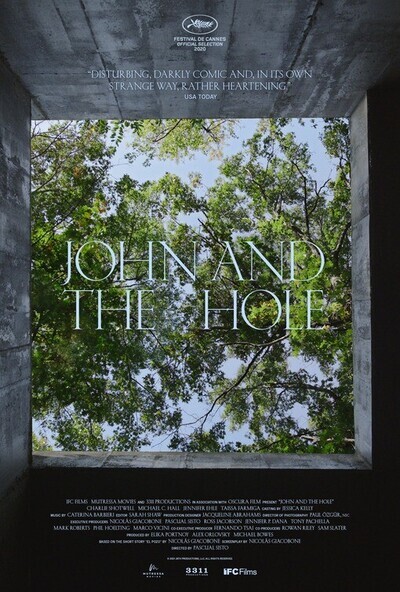