When Beyoncé hit the stage for her two performances at Coachella last year, the audience would have been more than satisfied with a run-through of her greatest hits. Instead, she presented the audience, both in person and streaming at home, with an impossibly ambitious set consisting of big hits and deep cuts that were woven together into an intricately choreographed work of performance art that was unapologetically feminist, and unabashedly steeped in all aspects of African-American culture, especially in its use of the visual iconography of historically black colleges and universities. The show also served as a career summation from one of the biggest names in the contemporary pop cultural firmament.

To say that she pulled all of this off would be a grotesque understatement—practically from the moment she stepped off the stage, her show was already being referred to as one of the greatest concert performances of all time. In an age in which virtually every cultural event of note is hyped to the stars, this might seem like hyperbole, but “Homecoming,” the eagerly awaited documentary chronicling both the show and its creation, not only confirms the greatness of her performance but helps give viewers additional appreciation of the entire spectacle.

Beyoncé, as you may know, was originally scheduled to appear at Coachella in 2017, soon after the release of her powerhouse “Lemonade” album, but was forced to postpone for a year after discovering that she was pregnant with twins. Thus, what might have once been a performance dedicated to promoting an album took on additional significance as it marked her return to performing after what she has described as a difficult pregnancy. Over the course of eight months of preparation, the show grew into an epic that would involve an army of singers, dancers, drumlines, and musicians, and celebrate black American history and culture, while utilizing everything from the words of the likes of Malcolm X, Maya Angelou and W.E.B. DuBois. (“It was important that I brought our own culture to Coachella,” she remarks in a voiceover.)

Like millions of others, I watched the original performance when it streamed online and was pretty much blown away by every moment. That said, I think I was even more impressed watching it the second time via “Homecoming,” because the film allowed me to better appreciate just how complex the staging was, and how every single detail from the dance moves to the silhouettes of the costumes were calibrated for maximum impact. The show lasts for nearly two hours and there is not a single wasted moment. To pick highlights is almost impossible. If pressed, I would choose the exuberant opening “Crazy in Love,” the super-sexy “Partition,” the show-stopping duet with Jay-Z on “Deja Vu,” and her reunion with Destiny’s Child on “Lose My Breath,” “Say My Name” and “Soldier” as the best of the bunch.

Of course, a great concert does not necessarily make for a great concert movie, but “Homecoming,” which Beyoncé also directed, makes for a strong companion piece. Combining footage from the two performances (each with its own specific costume scheme), she has created an impeccably shot and edited work that seamlessly comes about as close to the sheer visceral experience of being there as is humanly possible. At certain points, the film cuts from the performance to footage shot during the rehearsal process in which Beyoncé talks about her hopes for the show as she shuffles between the three soundstages utilized to bring it all to life. Although she may not be especially revelatory in her comments, these moments do allow the rare sight of Beyoncé sporting an actual sense of doubt as she tries to get herself back into performance form after her pregnancy. Even in montage form, her efforts appear to be utterly grueling (at one point, even she admits “I will never push myself that far again”) but as exhausting as this sequence is, the payoff, her performance of “Flawless,” is an exhilarating triumph.

“Homecoming” deserves consideration as one of the great concert movies of all time alongside such classics as “Woodstock,” “The Last Waltz,” “Stop Making Sense,” “Chuck Berry Hail! Hail! Rock ’n’ Roll,” “Sign ‘o’ the Times” and “Shine a Light.” It captures a legendary performer at the peak of her powers and translates the energy of the event into cinematic terms, while allowing viewers to fully appreciate all the hard work that went into creating something that looks effortless. Whether you are experiencing it for the first time or are reliving it, “Homecoming” is a knockout, and the only question that one could possibly have by the end concerns what Beyoncé could possibly do to top her accomplishments here. If there's anyone who could pull off such a seemingly impossible challenge, it is her. 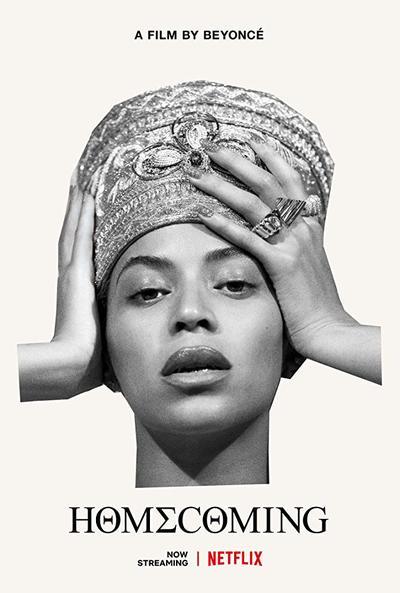