Is there any hope for Rory and Allison? That's the question at the heart of "The Nest," a wrenching, beautiful drama about a married couple who relocate from upstate New York to a drafty old estate near London, where their union unravels.

The marriage of Rory and Allison (Jude Law and Carrie Coon) was already frayed. But the spouses were so comfortable with the family's routines, and so immersed in their own pursuits (he's an investment banker, she raises horses and teaches riding), that the warning signs didn't register. Their relocation to England, where Rory grew up, is a black light pointed at a crime scene: it's impossible not to see everything that's gone wrong.

Their kids see it, too. The eye-rolling teenage disaffection of their elder daughter, Sam (Oona Roche), a girl fathered by Allison's first husband, becomes overt once the move to England is complete, and slowly turns into blatant cynicism, hostility, and rebellion. Roche's narrow-eyed stare whenever her parents have a go at special pleading is one of the film's most devastating recurring images: her face is judgment. Rory and Allison's youngest, the sweet and sensitive Ben (Charlie Shotwell), withdraws into himself, and you may start to fear for his physical safety (especially if you've seen "Ordinary People"; the actor has a young Timothy Hutton vibe).

Writer/director Sean Durkin ("Martha Marcy May Marlene") has delivered the cinematic equivalent of those substantial, long-yet-not-too-long short stories that says everything about its subject without actually saying everything; or, perhaps conversely, a poem or song that takes you through stages/aspects of a magnetic but destructive relationship (like Stephen Sondheim's "Sorry Grateful" from Company, or Bob Dylan's "Lily, Rosemary and the Jack of Hearts" from Blood on the Tracks). Durkin's script and direction are as economical and exact as they are compassionate and merciless, feeling for these characters without pandering to the audience by constantly proclaiming their lovability. The cinematography (by Mátyás Erdély), editing (by Matthew Hannam) and score (by Arcade Fire's Richard Reed Parry) are all on the same page, it seems. There's nothing fussy about any creative choice.

As devastating as "The Nest" often is, the sheer beauty of individual moments is still elating. And that beauty is encapsulated in the simplicity and rightness of what each moment choose to focus on, whether it's the sounds of Rory's anxious breathing and his dress shoes crump-crumping on a gravel road as he walks home in silhouette at dawn after staying out in the city all night; or the creeping zoom shots that make it seem as if an unseen, icy intelligence is surveilling the family; or the wide shot of the drunk, rebellious Allison dancing alone among strangers in a nightclub; or the long shot of Ben hiding in a cluttered room to escape his sister's unauthorized, decadent party; or anything involving Allison and her beloved horses.

Law (who co-produced and championed the film) gives one of his greatest performances as Rory. The character feels like the sum total of every major role he's played till now, from the Gatsby-like golden boy in the "The Talented Mr. Ripley" to the title character in the remake of "Alfie" to Pope Pius XIII on HBO's "The Young Pope" (the ultimate salesman). There's a touch of "Mad Men" hero Don Draper in here as well: Rory grew up working class to poor, and is great at using his looks and charisma to sell things; but he sucks at details, and he's so obsessed with appearing prosperous that he neglects the mathematical facts of what things cost, and pulls his wife and kids into ill-advised gambles.

Burt Lancaster fans will appreciate the project's spiritual kinship with Lancaster's late cult classic "The Swimmer"—not just because of the "Mad Men" connection (that series' writers often turned to John Cheever's fiction for inspiration), but because of the script's keen balance of direct factual observation (here is what the characters did, action by action, line by line) and plausibly-deniable allusions to mythology, legend, and scripture (you think about what things "mean," in a larger sense, even though the film/story never footnotes things for you). Law's performance is Lancaster-ish, or "Swimmer" adjacent, as well, in that it's animated not just by a set of choices, but a philosophy, a vision of life—and perhaps also a self-inventory that connected the character of Rory to aspects of himself, as flattering or unflattering as the resulting realizations must have been.

Coon equals and in some ways exceeds Law here. It's the more altogether impressive performance because she's comparatively new to us (her breakthroughs were on HBO's "The Leftovers" and the third season of FX's "Fargo"). As Allison, she gives as performance as grounded, nervy, vulnerable, and technically flawless as any we've seen from more established actresses, and in a different mode from the roles that put her on critics' and viewers' radar.

Coon has four, maybe five scenes in "The Nest" where her work is so focused and simple (in the sense of being direct and unadorned, not crude or simplistic) that they could stand for the movie in its totality. The greatest is a dinner scene near the end of the film. Rory has cajoled and compelled Allison to accompany him as he and a coworker, Steve (a sturdy and affecting supporting performance by Adeel Akhtar), to help them win over clients who could bring a lot of money into their company. Rory, who's wracked by financial instability and marital desperation at that point, tries way too hard, essentially giving a bad performance as Rory. He presents himself as a man of culture and taste who appreciates the finer things, but comes off as a yob cosplaying a sophisticate. Allison, who's had enough of his delusions, can't play along anymore, and lets her seething resentment of Rory escape in biting asides, like steam puffs from a kettle that's about to shriek.

This is a lead performance in the vein of Gena Rowlands' work with John Cassavetes in the 1970s. It's not just the character's closed-off intensity or nervous cigarette smoking or feathery blond hair that puts the comparison across. It's the way Coon lets you not just understand but feel what Allison is feeling—not in a showy or hand-holding way, by indicating or underlining or calling attention to the technical part of the performance; but seemingly without any forethought having been given to how the viewer could perceive anything—indeed whether anyone might be watching at all. You feel Allison in the way that you'd feel what a close friend was feeling if you were in the same room with her.

This is not the same thing as saying it's an agreeable or light or upbeat performance. Allison is a lot to take. She loves her kids and seems like a fundamentally decent person. But she's in denial about her own materialistic tendencies (which she offloads onto the more flagrantly acquisitive Rory). And she's so wrapped up in herself and her disintegrating, codependent marriage that she doesn't really notice her kids' pain in the way that a mother should.

That being said, she's a far better mother than Rory is a father. And, maybe because break-up stories with a charismatic antihero tend to pull sympathy towards the husband/boyfriend—is this encoded in the gendered nature of mainstream filmmaking, or the culture at large?—Durkin gives us just one scene where "The Nest" tells us what to think: a cabdriver listens to Rory's self-serving tale of woe and calls bullshit. "I'm a good father," Rory says, in a drunken whine, then goes on to declare that he puts food on the table and roof over his children's heads. "That's the bare minimum you should do, mate," the cabdriver says, in a prelude to one of the most unexpectedly satisfying bits of almost-extradramatic commentary I've seen in a mainstream drama: the cabdriver, standing in for the viewer, and for everyone in Rory's life, says, in effect, "Enough. We're done."

"The Nest" clocks in at a brisk hour and forty-five minutes. But in the memory, it feels much longer (in a good way), because every scene, moment, line, and gesture stands for so many things at once, and exists on so many levels at once, without making a big deal of how much data and meaning is being conveyed. (That the story is set in the 1980s, the era of go-go Reaganism and Thatcherism, prepares us for a lecture on capitalism's failures that never arrives; this is a period movie, not a thesis statement.) The result ranks with cinema's best martial break-up stories, up there with "Shoot the Moon" (likewise built upon a Yankee-Brit union). The final scene—set, as in so many perfect movies about the complexity of family relationships, at the breakfast table—is just right. It ends on a note of potentiality, not certainty. This lets viewers argue for or against the possibility (or advisability) of the marriage repairing itself or accepting failure and moving on.

By the time the end arrives, the parents, the children, and the viewers are in alignment about the state of things. The relief that accompanies such a realization lets a tale of escalating discomfort end on a note of—well, not "hope," exactly. Realism? Acceptance. Like driving around in a car that's been neglected for months or years and that has a lot of things wrong with it, then finally admitting—on the side of the road, in the rain, in the dark—that you'd ignored warning signs for too long, and have no one to blame for this disaster but yourself.

You don't root for anyone in this movie. It's not the sort of movie that cares whether you approve of its characters—only that you understand them. 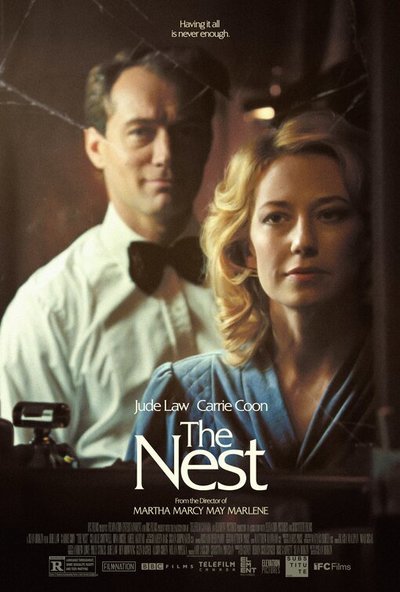 Rated R for language throughout, some sexuality, nudity and teen partying.