Jimi: All is By My Side

You will not hear “Red House” in “Jimi: All Is By My Side,” the new musical drama about Jimi Hendrix. You will not hear “Fire,” or “Purple Haze,” or “The Wind Cries Mary,” or even my favorite Hendrix song, “Manic Depression.” And of the covers that the ideally cast Andre Benjamin performs as the iconic guitarist, you won’t hear his famous, glorious version of “The Star-Spangled Banner.”

This is because writer-director John Ridley and his team couldn’t secure the rights to any of that spectacular music from Hendrix’s estate. This would seem like a massive obstacle in trying to make a film about Jimi Hendrix. Instead, the filmmakers have turned it into an opportunity.

They’ve chosen to focus on the year before Hendrix became a superstar–when he was still planting the seeds of his greatness and signature sound. Similar to the way “The Motorcycle Diaries” approached a young Che Guevara, “Jimi: All Is By My Side,” depicts a small but crucial sliver in the life of a gargantuan cultural figure: the time he spent in London from 1966-67. It’s a risky approach that’s bound to frustrate many folks, but it’s also quite illuminating in its own way.

Besides, how clichéd is the traditional biopic at this point? Actually, it’s a genre that has long since been clichéd, as evidenced by the brilliantly dead-on “Walk Hard: The Dewey Cox Story.” And that came out all the way back in 2007. We didn’t need to see a montage of a drug-addled Hendrix being mobbed by fans as his hits make their way up the charts.

Instead, Ridley–a novelist, playwright, commentator and producer who’s probably best known for winning the Academy Award this year for his “12 Years a Slave” screenplay–shows us a soft-spoken, cerebral and sometimes insecure Hendrix. “My voice is terrible,” the soon-to-be legend insists when an early mentor suggests that he also sing while dazzling audiences with his formidable guitar talents.

What’s fascinating about “Jimi: All Is By My Side” is not only its decision to show us this particular chapter in Hendrix’s life, but also the way it teases out the shadings in a famous figure we only think we know so well. Benjamin–a.k.a. Andre 3000 of OutKast–is certainly familiar with what it takes to give an electrifying on-stage performance. Hendrix has been a longtime hero of his, and a lanky Benjamin convincingly conveys a persona that was as elusive as his stage presence was explosive.

But it’s the quieter, more philosophical and even conflicting elements of Hendrix’s personality that are even more compelling. You get the sense that if he hadn’t been discovered playing backup guitar at New York’s Cheetah Club in 1966, Hendrix might have been content playing gigs here and there and spending his free time wandering around Greenwich Village, perusing secondhand clothing stores and reading paperback sci-fi novels.

“I want my music to go into the soul of a person,” Hendrix says at one point. And indeed, Ridley has chosen a similarly ethereal approach at times to his storytelling. Memories come in impressionistic wisps and from various sources–old footage and photographs from the period, for example. Conversations overlap at a party or a pub. The sound design all around is quite clever; in one scene, we see Hendrix playing but we hear the actual noise of his fingers on the strings rather than the song itself.

We can’t quite capture it all, Ridley seems to be saying, just as a biopic couldn’t possibly capture the complete nature of a towering cultural titan. Again, it might prove frustrating for filmgoers who’d prefer a more traditional narrative (or, you know, actual Hendrix songs). Instead, “Jimi: All Is By My Side” shines a light on a formative time in his all-too short career, and on the women who nurtured, shaped and loved him.

The first is Linda Keith (Imogen Poots), best known at that time, reductively, as Keith Richards’ girlfriend. Keith is the one who discovers him playing backup and immediately recognizes that she’s in the presence of greatness. Poots’ smart and sexy demeanor has significantly improved marginal material like “Need for Speed” and “That Awkward Moment.” Here, she’s the seductive voice of reason with a head for business–a posh, Mod goddess and a pushy stage mother. (Costume designer Leonie Pendergast beautifully recreates the bold, minimalist look of Swinging Sixties style.)

Keith connects Hendrix with the man who would become his manager, the Animals’ bassist Chas Chandler (Andrew Buckley). She also lines up the members of his own band, the Experience: bass player Noel Redding (Oliver Bennett) and drummer Mitch Mitchell (Tom Dunlea), whose mop of curly hair inspired Hendrix’s trademark Afro.

But Keith’s actual feelings fall into a gray area between friendship, territoriality and love. And so things get tense when a second woman comes along: Kathy Etchingham (Hayley Atwell), who would become Hendrix’s longtime girlfriend and Yoko Ono figure. She was also Keith’s opposite: a volatile, potty-mouthed, redheaded hairdresser. Atwell is a scream in a role that’s totally different from any she’s ever played before, especially compared to the buttoned-down Peggy Carter in the “Captain America” universe.

(The real-life Etchingham herself is not so thrilled with the film, however, and has written that a scene in which Hendrix savagely beats her with a telephone receiver at a pub never actually happened. The outburst does seem to come out of nowhere and doesn’t exactly jibe with the easygoing nature we’d seen up until then.)

Both women, however, feel protective over Hendrix. In a lot of ways, “Jimi: All Is By My Side” is about these powerful female forces, with Hendrix himself fading into the background, lounging in a comfortable chair and rapping about groovy, cosmic concepts. But then a third woman comes along who takes him in an entirely different direction: Ida (the serenely beautiful Ruth Negga), a fellow American living in London as a black activist. A fictional figure in this realm who’s based on other people, Ida insists that Hendrix should use his gifts and charisma to speak to and for the black people.

That’s not his thing, man. And as he begins to hone his sound and recognize his power, we see glimmers of him turning into the prototypical dismissive and narcissistic rock god. But given Ridley’s overall approach, these are only glimmers. Hendrix’s fiery and triumphant performance at the 1967 Monterey Pop Festival awaits. The prospect of it dangles tantalizingly before us at the film’s conclusion. All we can do is cheer, and hope, and wait for an encore that will never come. 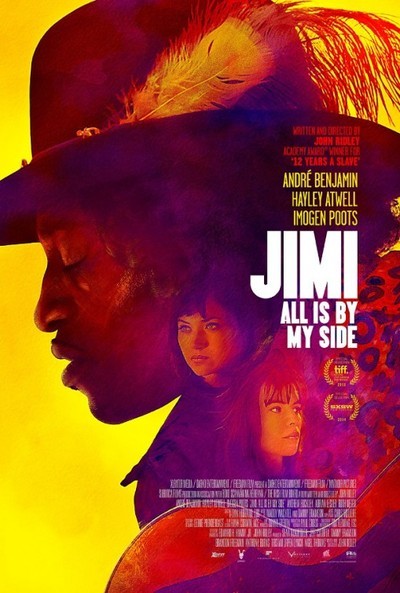 Rated R for language including sexual references, and some drug content