In "Need for Speed," a character cites the oft-quoted phrase that a man in a big, flashy, expensive car "is overcompensating for something." The same can be said for this movie. It wears on its sleeve the desperation of trying to create another macho racing franchise like "The Fast and the Furious." That series had six movies to create, shape, modify and solidify its mythology. With five fewer tries, "Need for Speed" aims for "F&F's" level of goofy, fan-pleasing grandiosity while attempting the existential vengeance vibe of "Drive." The resulting mishmash is as exciting as getting a tow from AAA, and just as slow.

This type of movie was more fun—and more dangerous—when Roger Corman and other '70s B-movie producers made them. Screenwriter George Gatins hints at elements Peter Fonda or Warren Oates would have nailed, and there are moments when "Need for Speed" flirts with the darkness found in films like "Dirty Mary Crazy Larry" and "Race with the Devil."

Aaron Paul doesn't have the coolness nor the gravitas of '70s era Oates or Fonda, but I can't blame him for this film's failure. The script pulls every punch, opting for a safe, wimpy simplicity that insults the viewer. The characters who inhabit "Need for Speed" may as well be stick figures with the trope they represent written over their heads. There's not one note of interest nor complexity at all. An actor with Paul's talent deserves a better feature in which to make his leading actor debut.

Gatins' script is also so full of contrivances and coincidences that you'll be compelled to bang your head into the seat in front of you, sending your 3-D glasses flying into the air. (Note: Don't waste your money on the 3-D.) There's a sloppiness to the writing that is downright infuriating; each overly plotted moment is reconciled in ways that would get a failing grade in the cheesiest screenwriting class. It raises many "but wait…" questions, and the film is so sluggish that you'll have plenty of time to contemplate each one with disgust.

Of course, one must expect, and welcome, a certain level of preposterousness in a film like this. A good movie, however, will pump a viewer so full of adrenaline that problems are noticed only upon much later reflection. Director Scott Waugh makes sure you feel all 130 minutes of "Need for Speed," and even worse, he expects you to take this nonsense seriously. He pauses for all manner of false emotional effect, and the main character's "anguish" is expressed in ways that are unintentionally hilarious rather than heartbreaking. The sudden appearance of a preternaturally slow, somber version of "All Along the Watchtower" under a scene nearly sent Sprite shooting out of my nose. A solitary tear shed near the end would shame even the most melodramatic telenovela.

The source of all this drama is Tobey Marshall (Aaron Paul). Marshall is The One Who Drives, a car shop owner who enjoys racing with his co-worker cronies Joe (Ramon Rodriguez), Finn (Rami Malek) and best friend Pete (Harrison Gilberton). Benny (Scott Mescudi), a pal with a pilot license, flies overhead, radioing down traffic information and road conditions to the drivers as they navigate streets filled with clueless regular drivers. An early race gave me a rather icky feeling, especially when one racer hits a homeless guy's cart, nearly killing him. (Note to filmmakers: Cars crashing through fruit stands—cool. Cars hitting homeless people—NOT COOL.)

Into this chummy, platonic circle drives Dino (Dominic Cooper). Dino has a long rivalry with Tobey, so the latter should be suspicious when he's asked to complete the Mustang that auto maker Carroll Shelby was working on before he died. Tobey and crew do the job because there's a $3 million price tag on the finished product, of which they'll receive 25 percent. Helping Dino sell the car is Julia (Imogen Poots), a British woman whose "Meet Cute" with Tobey is an excruciatingly long variation on the "Oh, it's a girl and she knows guy stuff!" cliché.

When Tobey gets out, his desire for vengeance isn't manifested by finding Dino and beating him to a pulp like a normal person. He instead wants to beat Dino in an illegal race called the DeLeon. Run by a crazed Michael Keaton, who seems to be channeling Jack Nicholson playing Max Headroom, the DeLeon is the MacGuffin in "Need for Speed." Most of the remaining movie involves a cross-country drive to the DeLeon with Tobey and Julia in the Mustang and the other guys in their respective cars and airplanes. It takes forever.

Even as mere car pornography, "Need for Speed" is a failure. The races are shot and edited in a manner that leeches them of any excitement, and I don't think a single car is onscreen more than five seconds at a time. Though the sound mix sends the appropriate rumbles through your person, there's no time to linger on and drool over these expensive marvels. In fact, you get a longer look at Finn's inexplicably exposed naked butt than you do at any car, which is appropriate. People seeking car-fueled excitement at "Need for Speed" will be left feeling "ass out." 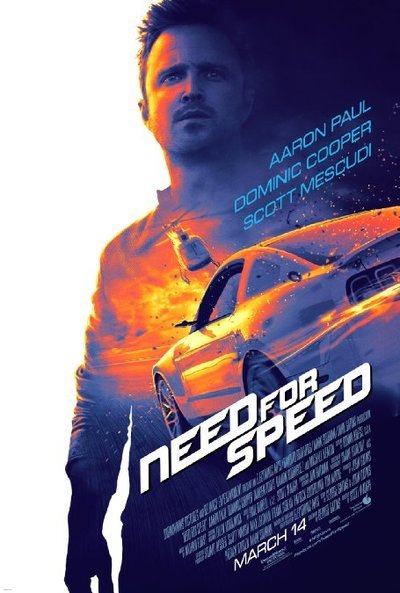