The last scene of “Jersey Boys” is a curtain call of sorts. Set to The Four Seasons’ memorable ode to deflowering, “December, 1963,” the scene explodes with bright, noisy colors and jubilant voices. It hops from character to character, visually name-checking the entire cast as they sing and dance. The camerawork, editing and lighting foster a genuine sense of excitement. In this finale, “Jersey Boys” feels like the Broadway musical upon which it is based, showcasing the energy and joy that continues to leap off the stage every night in venues from Las Vegas to London.

If only director Clint Eastwood had directed more scenes like this. He ensured his cast would be up to the task by importing several veterans from the stage. Three of the Four Seasons cast in “Jersey Boys” are from various incarnations of the show, including Tony-winner John Lloyd Young, whose Frankie Valli is vocally spot-on and a force to behold. Christopher Walken, no slouch to musicals, is also on hand, doing a bit of a soft-shoe in the aforementioned finale. Even “Boardwalk Empire” vet Vincent Piazza, as group member Tommy DeVito, holds his own with the more musically seasoned members of The Four Seasons.

The singing talent is there, but Eastwood and writers Marshall Brickman (“Annie Hall”) and Rick Elise opt for a more realistic depiction of events. They transform “Jersey Boys” from jukebox musical to movie biopic, exchanging one much-maligned genre for another. In the process, the focus is shifted; the drama is played up and the music seems shoehorned in where convenient.

This imbalance is forgivable in scenes where the band deals with talent scout Joe Pesci (yes, that Joe Pesci, here in the guise of actor Joey Russo) or interact with one another. The problems arise in the mob-related material, which is seemingly endless. These plot elements are necessary to tell the full story, but the lazy way they are depicted stops the movie cold. We've already seen “GoodFellas,” “Mean Streets” and any number of mob-related tales, so Eastwood’s take on them feels lifeless. As the catalyst for most of these scenes, Piazza wrings his derivative character for all that he’s worth. But Walken, as mob boss Gyp DeCarlo, is given little to do besides commit scene-stealing grand larceny in a weepy moment opposite Young’s Valli.

“Jersey Boys” keeps the show’s conceit of having each of the Four Seasons tell various aspects of the story. Tommy, Frankie, Nick Massi (Michael Lomenda) and Bob Gaudio (Erich Bergen) break the fourth wall at various points to talk to us directly. Since Tommy is both the band’s heart and its downfall, he figures into everyone’s narrative. Songwriter Gaudio becomes the band’s primary songwriter because Tommy acted on a tip from Joe Pesci. Frankie sharpens and perfects his famous falsetto with Tommy’s help. And Nick rooms with Tommy for 10 years and sees the worst sides of him.

Whether they’re singing or fighting, “Jersey Boys” is at its best when it focuses on the band members’ chemistry. The actors know their characters’ voices well enough to effortlessly plow through as many Four Seasons songs as the original musical contains. They sound spectacular, and there’s enough of each song to satiate fans and newbies alike. But Eastwood shoots so many of these numbers in a matter-of-fact, almost documentary style, static way that the two times he really cuts loose are the film’s best moments. The second time is the curtain call finale; the first is Young’s hauntingly emotional rendering of “Can’t Take My Eyes Off You.” If you know the song, you’ll know what the big mid-number reveal is. Eastwood presents it with stunning gusto, and the reaction Valli gets at the end is as close to a stand-up-and-cheer moment as “Jersey Boys” gets.

Though no longer playing to the back of the house, Young, Bergen and Lomenda still have a tendency to go big in front of the camera. It’s most noticeable opposite Piazza’s Tommy, who despite his stereotype-ridden role gives the best performance in “Jersey Boys.” Yet the vocal talent trumps any minor performance issues incurred. The filmmakers made the right decisions for the leads. This movie will sell many soundtracks.

The elephant in the room is Eastwood himself. He is the wrong director for this material, and this opinion comes from someone who loved “Million Dollar Baby,” “Space Cowboys” and even those orangutan movies. He is the wrong choice, but not for the reason you think. Eastwood is adept at handling music in films, from “Bird” to his country music homage to Garbo’s “Camille,” “Honkytonk Man” (which I also like without shame). But, for once, I have to agree with those who say his style is too laid back. A movie as grungy, profane and blue-collar as “Jersey Boys” needs to feel more alive. When the music’s not playing, “Jersey Boys” starts to lull you into mild lethargy. I wonder what fellow Jersey Boy Brian De Palma could have done with this. 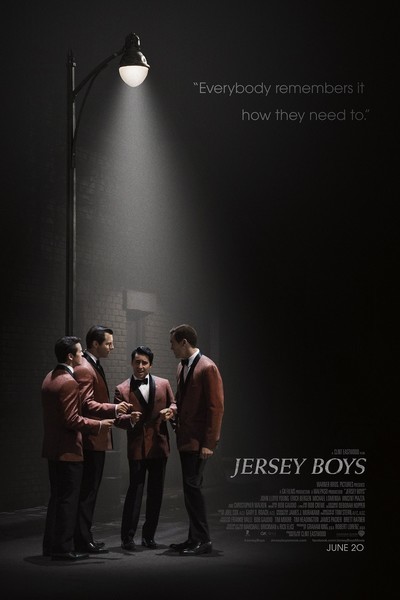