Clint Eastwood produced and directed "Honkytonk Man," and stars in it as a Depression-era loser who drifts through the South with his young nephew, aiming eventually to get to Nashville and maybe get on the Grand Ol' Opry. The movie's credits say the screenplay is by Clancy Carlile, based on his own novel, but in speculating on what drew Eastwood to this project, I came across this entry in Ephraim Katz's Film Encyclopedia:

"Eastwood, Clint. Actor, director. Born on May 31, 1930, in San Francisco. A child of the Depression, he spent his early boyhood trailing a father who pumped gas along dusty roads all over the West Coast . . ."

The entry goes on to list the usual odd jobs (logger, steel-furnace stoker) that all actors seem to hold down on their way to stardom, but Id read enough to support my intuition that "Honkytonk Man" means a lot to Eastwood in ways that may not be immediately apparent.

This is a sweet, whimsical, low-key movie, a movie that makes you feel good without pressing you too hard. It provides Eastwood with a screen character who is the complete opposite of the patented Eastwood tough guys, and provides a role of nearly equal performance for his son, Kyle, as a serious, independent and utterly engaging young nephew named Whit. What happens to them on the road is not quite as important in this movie as what happens between them.

The movie starts with Eastwood drunk behind the wheel of a big 1930s touring car, knocking over the windmill on his latest return to the old homestead. He's sort of a Hank Williams type. His family has seen this act before. They put him to bed and hide the bottle. The next day, with an ominous cough, Eastwood talks about his dream of heading for Nashville and cashing in some old IOUs. He's a singer and a songwriter, luckless but not untalented, and he thinks he could make it onto the Opry.

He wants to take the kid along. After some hesitation, the kid's mother (Verna Bloom) agrees, mostly because she hopes her son can ride herd on Eastwood and keep him reasonably sober. She makes her son promise not to drink or fool around with women (thus putting her finger unerringly on one thing he did the night before, and another that he hopes to do as soon as possible). Old grandpa (John McIntire) also decides to go along for the ride; he's got some people in Tennessee he hasn't seen in 40 years.

The road part of the picture is picaresque, photographed through a haze of romance and nostalgia, and spiced up with a visit to a gambling house and an encounter with a very individualistic young woman (Alexa Kenin) who also decides to join the traveling party. She has an amazing gift for couching the most ordinary sentiments in romantic prose.

The movie's best scenes are the ones Eastwood plays in Nashville, during an audition at the Opry and, later, in a recording studio. He sings his songs with the kind of bone-weariness that doesn't hurt the right kind of country song, and there's a special moment in the studio when a supporting musician lends a hand. The movie turns out to be about realizing your dreams after all, which is sort of a surprise in a story where even the high points are only bittersweet.

This is a special movie. In making it, Eastwood was obviously moving away from his Dirty Harry image, but that's nothing new; his spectacular success in violent movies tends to distract us from his intriguing and challenging career as the director and/or star of such offbeat projects as "Bronco Billy" and "Play Misty for Me." He seems to have a personal stake in this story, and we begin to feel it, too. Sometimes the simplest country songs are just telling the facts. 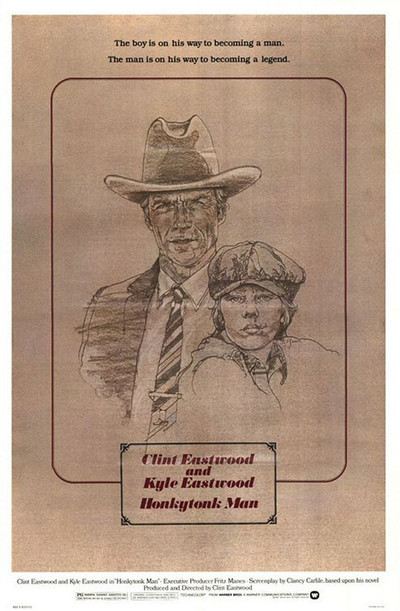