As in his last few films, Smith (“Tusk,” “Yoga Hosers”) shows his age by taking on more than he seems comfortable attempting, so he delivers not enough of what he thinks we still want from him (catchphrases and jort jokes), and too much of what he thinks he wants from us (ex: a stage for Harley Quinn Smith, his aspiring, and not untalented thespian daughter). So “Jay and Silent Bob Reboot” begins by reassuring viewers that it isn’t just another reboot, which Smith has one authorial mouthpiece (Jason Lee) define as a soulless cash-in that features just enough callbacks to keep fans interested, but is otherwise only distinguished by its younger and more diverse cast (“Star Wars: The Force Awakens” is unfortunately cited as an illustrative example).

Smith often calls back to lame jokes—usually about how gay sex is apparently as weird as pot is cool, which are especially embarrassing given the average cast member’s age—that were already mono-tired in the dumb, but mostly satisfying “Jay and Silent Bob Strike Back,” with a mawkish subplot involving Jay’s frustrated attempts at bonding with Milly (Harley Quinn Smith), his estranged, Chronic-Con-obsessed daughter.

Smith also perfectly illustrates the difference between being self-conscious and self-aware by flattering an audience that, by this point, has stuck by him through a lot of dreck, with self-deprecating humor about how he knows he sucks (yes, there are multiple “Cop Out” jokes, and even a couple about “Tusk”). Throw in Smith’s notoriously basic filmmaking skills, and you get “Jay and Silent Bob Reboot,” a spectacularly disjointed comedy that’s only superficially about two foul-mouthed, but well-meaning dopes who light and pass the proverbial torch to the next generation of slackers. “Reboot” is more of an ego trip for Smith, an amiable, creatively frustrated pop artist who survived a major health crisis—one that even he knows he can’t shut up about: it’s the subject of a handful of “Reboot” jokes, of varying quality—and now wants to celebrate himself for being older despite not being much wiser or funnier.

This last point is the biggest sticking point: had “Jay and Silent Bob Reboot” been funnier, it wouldn’t need to be anything else. There are some bright spots, as you might expect from a buddy comedy whose $10 million budget seems to have been mostly spent on stunt-casting actors and comedians from Smith’s previous New Jersey/View-Askew-niverse films, including Joey Lauren Adams, Rosario Dawson, and Justin Long. There’s even an unintentionally hilarious, if very awkward, cameo from Ben Affleck, who practically crushes his ham-bone to dust while strenuously winking at viewers about his brief time playing Batman. Cameos by Fred Armisen, Tommy Chong, Val Kilmer, and both Method Man and Redman are also mostly funny thanks to these performers’ knack for scenery-noshing. Smith’s recycled gags wouldn’t work at all without his game cast, though sometimes, even they can’t salvage their scenes (sorry, Jason Lee fans!).

Not as funny: pretty much any scene involving Milly and her friends, a quartet of teenage girls that are unapologetically horny (they want to have sex with Chris Hemsworth), smoke weed (they eat potent edibles), and distrust authority figures (they sometimes repeat Harley Quinn’s dad’s old jokes). Milly and her friends also illustrate the limits of Smith’s self-diagnosis: a Middle Eastern character is named Jihad (Aparna Brielle) while deaf protagonist Soapy (Treshelle Edmond) and Chinese-American podcaster Sue-Lynn (Sue-Lynn Ansari) are both along for the ride. Milly and her friends are especially awkward in a scene where Jay and Silent Bob rescue their young friends from a Ku Klux Klan rally, but only after Mewes and Smith’s characters light a blunt with a burning cross and then tell some Klansmen that they’re not really KKK material (there’s also a callback to the “goat-f—ker” joke from “Strike Back,” but it doesn’t quite work). Smith seems to know how thin his carbon-dated material is—there are some laughs in scenes where he, playing himself, rambles about Kevin Smith, Hypeman whenever he’s not letting a boom mic crash on his head—but “Jay and Silent Bob Reboot” often bears this mopey self-assessment out. 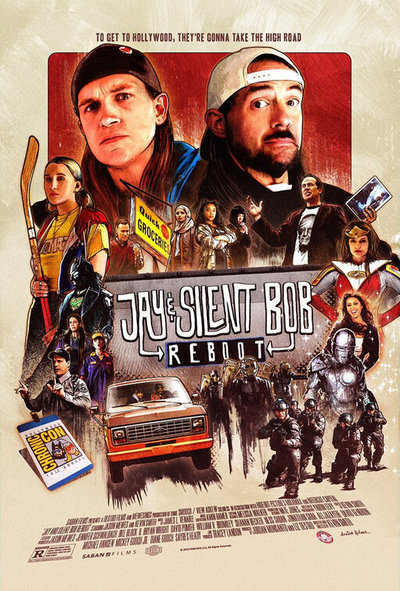