Horror-comedy "Yoga Hosers," Kevin Smith's latest scatological experiment, takes elements from his previous movies and stitches them together to form tedious Franken-gags. The snarky convenience store clerks of "Tusk," Smith's misconceived (but relatively straight-faced) horror flick, return to stop a decades-old conspiracy hatched by a Canadian Nazi and his ... sentient Nazi sausages. That may sound like a novel premise, but in Smith's infirm hands, it sinks beneath the weight of schticky jokes about Canada (They all say "aboot" and eat "Pucky Charms!"), Nazis (they all say "Nein," and "Wunderbar!"), and teen girls (they can't get away from those darn iPhones!). "Yoga Hosers" is tiring, and not because it's dumb or inherently obnoxious. No, as RogerEbert.com's resident Kevin Smith apologist, it pains me to say this, but: this movie should have been made by someone with more discipline.

"Yoga Hosers" starts off simply enough: inseparable teenagers Colleen C. and Colleen M. (Lily-Rose Depp, and Harley Quinn Smith, respectively, daughters of Johnny and Kevin) are in tenth grade, and want to attend a twelfth grade party hosted by handsome senior Hunter Calloway (Austin Butler) and his gross friend Gordon Greenleaf (Tyler Posey). But Colleen C.'s dad (Tony Hale) is going on a vacation with his catty girlfriend Tabitha (Natasha Lyonne). So the Colleens have to mind the Eh-2-Zed, Canada's answer to the Quick Stop convenience store you see in "Clerks." And while the girls pine for Hunter, murderous, butt-invading Nazi bratwursts—or "Bratzi"—infiltrate the Eh-2-Zed.

Yes, I said "butt-invading Nazi bratwursts." And no, I'm not shaking my head while I type this. Nazi meat-stuffs that sodomize their victims to death are not the worst of this film's problems. So no, Smith isn't an utter moron for coming up this premise. It could have been quite funny. In fact, if the creators of "South Park" had done it, "Yoga Hosers" might have been hysterical.

Unfortunately, Smith made "Yoga Hosers," a reality that sinks in with every sloppy joke, scattershot line-reading and uninspired wide-shot. That's right, even basic photographic coverage feels amateurish in Smith's films, a signature trait I must reluctantly admit to ignoring with some of his recent output. His main strength as a filmmaker and storyteller is his tendency of presenting a personal or just singular worldview. Say what you want about "Tusk," but there is not only a bizarre premise that holds together but a genuinely weird atmosphere, long enough for it to become clear that Smith has no idea where he's going. "Tusk" is disappointing, but it at least tried to do something new. "Yoga Hosers" feels like they took the wrong elements out of "Tusk" and spun-it-off into misguided schtick.

I keep saying "schtick" because that is exactly what Smith movies become when he runs out of ideas. Compare "Clerks" with "Jay and Silent Bob Strike Back" and you'll see exactly what I mean: Smith took some of his favorite parts about his best movie—Jay and Silent Bob—and structured a whole movie out of their misadventures. The fact that his daughter and co-star Johnny Depp's daughter are the leads of the film gives some indication as to why Smith chose to make a whole movie about the heroines of "Yoga Hosers." What it doesn't explain is why he wasn't able to translate his enthusiasm into a compelling story, funny jokes or even some interesting camerawork.

Oh, right, that's because nobody but diehards expect anything from Smith movies anymore. Seemingly aware of this, he's been making the most of his creative freedom. But with that freedom comes an unfortunate habit of never reining in his worse ideas. Case in point: Depp's Guy LaPointe, a bumbling, Inspector Clouseau-type man-hunter with a phallic nose, and an indecipherably goofy accent. This time, Depp's accent isn't the weakest part about his sub-Catskills schtick—it's his multiplying facial birthmarks, which keep changing locations between takes. This is the kind of joke that's only funny for the people involved in the making of "Yoga Hosers." See also: most of "Yoga Hosers."

I can't judge "Yoga Hosers" too harshly, really. The worst thing it did is bore me. Smith's not wrong to think that Harley Quinn Smith and Lily-Rose Depp make a good time. The scene where they do dueling impressions of Christian Bale's Batman is especially funny. But these two can't carry a movie yet, not without stronger screwball banter. I don't really want to tell Smith to stop following his gut instincts, since that's what makes his movies so compelling. But, well, if he's out there reading this: hire a script doctor, and get a director-friend to give you a hand on your next project. You're not the worst thing to happen to contemporary cinema. But man, you need to be a lot better. 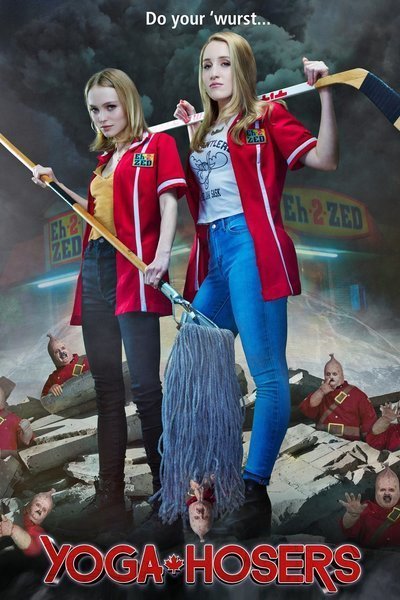