Yes, really: four stars for "Jackass Forever," a film in which people are blasted to smithereens in Port-a-Potties, strapped into centrifuges and forced to drink beverages until they vomit, menaced by bears and snakes, stung by scorpions and bees, and bashed in the genitals repeatedly by more individuals and devices than can be cited in detail in the sentence you're currently reading, lest it break the record of 1,288 words set by William Faulkner in "Absalom, Absalom!"

Let's embrace the dictum (huhr, huhr! He said "dict") beloved by this site's founder: a work should be judged by what it is, and tries to be. The star rating at the top of a RogerEbert.com review measures how well a movie achieves the goals it appears to have set for itself. This explains why "Au Hasard Balthazar," "The Tree of Life," "Blazing Saddles" and "Raiders of the Lost Ark" all got four stars from Mr. Ebert. It's unsportsmanlike to penalize a meal for not being a sea bream filet with citrus fruit, peppers, and caramelized ventrèche when it is plainly a hot dog with mustard.

Therefore, it is with a glad heart that I report that "Jackass Forever" is the deepest example of the template that the "Jackass" TV series and movie franchise devised and perfected. It is equal parts Buster Keaton-Jackie Chan slapstick extravaganza, WWE-styled spectacle, and "geek trick." Comedians and stunt performers Steve-O, Chris Pontius, Dave England, Wee Man, Danger Ehren, Preston Lacy and Sean "Poopies" McInerney, plus junior jackasses like Eric Manaka (of the "Jackass"-adjacent "Action Point") and Rachel Wolfson, and special guest stars, including Eric André and Machine Gun Kelly, all gladly injure and debase themselves under the direction of lead jackass Johnny Knoxville, an unholy fusion of Brad Pitt and Beetlejuice who seems to get as much pleasure from hugging and congratulating his colleagues as he does from zapping them with tasers and dropping buckets of pig semen on their heads.

It will surprise almost nobody who's read this far that "Jackass" has been the object of poker-faced scholarly and critical study since the moment it appeared on MTV. It's been viewed through the lenses of amateurism, performativity, aging/mortality, "transgression, abjection and the economy of white masculinity," coded homosexuality and homoeroticism. "Has there ever been a group of straight men who wanted to f**k each other as desperately as these guys?" asked a 2010 article about "Jackass 3-D," right after noting that the movie had been screened at the Museum of Modern Art in "the very building that also houses a Picasso collection."

That the "Jackass" gang always maintains plausible deniability about whether they consciously embed any of this stuff into their material makes it much more enjoyable to spelunk for meaning, as aficionados of other populist art forms, including pro wrestling and soap operas, have done for generations. "Visually, Jackass’ amateur aesthetic includes the use of the fisheye lens held over from [the founding filmmakers'] skate videos, frequent zooms, and jerky, handheld cameras," wrote Jorie Lagerwey in the Spring 2004 issue of The University of Southern California's Spectator magazine. "It also relies specifically on unrehearsed direct address, both introducing segments and commenting to the camera during the stunts, as well as the way the backstage—whether planning and preparation or during filming—is often put in front of the camera."

The movie is also a spirited—though gleefully weird—example of what critic Matt Singer calls the "legacyquel"—a work that's about passing a torch from a series' founding generation to their successors, and folding thoughts on age, physical decline, and the inescapability of death into the story rather than pretending to be immune to such concerns while whistling through the proverbial graveyard.

As it turns out, the graveyard here is more than proverbial: there's a lengthy sequence, consciously mirroring a previous bit, in which Wee Man is staked out almost-naked in a cemetery with chunks of raw meat arranged on and around his twig and berries in advance of a vulture's appearance. Colleagues dressed like voodoo priests look on, cackling and braying.

I suppose you could call this too on-the-nose. But y'know what else is too on-the-nose? Pretty much every frame of every iteration of "Jackass," including ones where people get bashed on the nose.

Johnny and the crew have been upfront for a long time about these aspects of their trade. Knoxville's "Bad Grandpa" character, who shows up again in "Jackass Forever," has often played like a sneaky way of getting out ahead of questions about the advisability—forget dignity!—of people sticking with this line of work into middle-age, and beyond. There are moments when one or more of the guys simply give up, or beg for (and receive) mercy, because they fear for their lives, or because a stunt coordinator or animal wrangler on the set has made the determination that somebody might get killed and it's just not worth it. (Jackass performer Bam Margera is barely in the movie and is suing the producers for violating his civil rights; his lawsuit is very much attuned to the gestalt of "Jackass.")

I saw "Jackass Forever" at a free radio screening on a cold weeknight, 24 months into a pandemic, after having lost multiple loved ones to Covid, heart problems, cancer, drug addiction, and plain, boring old age, more than 20 years after first watching "Jackass" on MTV, and on the eve of my youngest son's 18th birthday. A lot of people reading this review won't care about any of that stuff. I bring it up anyway because the movie cares about it, enough to showcase the immutable facts of aging, physical infirmity, maturity (or the lack thereof), and the sanding-away of youthful delusions, and regard them as unflinchingly as a performer staring into the fanged maw of a spider that's about to bite him in the face.

What "Jackass" is about, on top of all the other things people have seen in it, is the fine line between courage and foolhardiness—if there even is one; and related to that, the possibility that all life, the boring as well as terrifying parts, is ultimately about how we all know, deep down—to paraphrase Professor Keating in "Dead Poets Society"—that someday we'll all be fertilizing daffodils; and that once you have accepted that truth, your only two choices are to (1) set the thought aside, and try to spend as much time as possible with the people and pastimes you love; or (2) seek opportunities to test yourself, and even risk injury and or death, in pursuit of beauty, or a dopamine hit.

The Jackass crew is very much oriented around (2). But the warmth that flows between them is so genuine that we cant help but notice how important (1) is. Every stunt comes back to the interplay of (1) and (2). The gang concocts the most ludicrous and surreal dares, and risks humiliation, suffering, and even doom. But there's no way any of them would consider doing any of this if they didn't have like-minded friends on the sidelines egging them on, getting ready to run in with a fire extinguisher or cattle prod or shark repellent or what have you. These performers soil themselves, wet themselves, projectile-puke in front of each other, float pantsless in a tub while trying to light farts on fire, and show not only their genitalia but ghastly injuries inflicted upon them, all in the name of comedy and thrills. There's no shame or judgment; just affection, and the shared belief that this is a lively way to pass the time, and defy time's passage.

There are a couple of stunts/contests involving a father and a son, and gags that mirror bits that the gang did 10 or 20 years ago. The latter give the editors an excuse to splice together footage of Knoxville, white-haired and sagging and battered, getting tossed upside-down like a rag doll with shots of the same thing happening when he had dark hair and a wiry body. The cuts between current and youthful incarnations of the lads might send you down your own rabbit-hole (or something-hole) of self-reflection, evoking a quote from another artist who had plenty on his mind but also loved a good pratfall or fart joke: "To me, fair friend, you can never be old."

"Jackass Forever" will be playing only in theaters on February 4th. 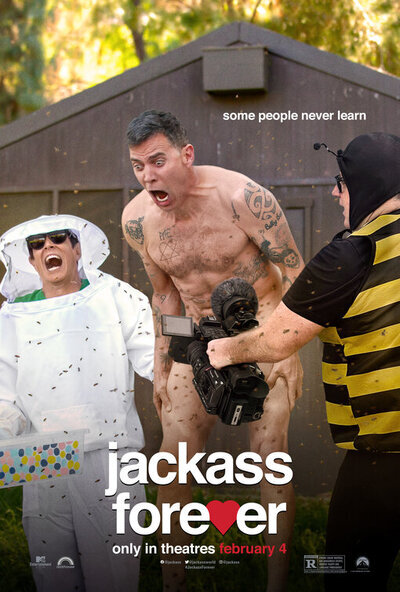 Johnny Knoxville as Self

Chris Pontius as Self

Dave England as Self

Jason Acuña as Self

Ehren McGhehey as Self

Preston Lacy as Self

Zach Holmes as Self

Sean McInerney as Self

Jasper Dolphin as Self

Rachel Wolfson as Self

Eric Manaka as Self

Tory Belleci as Self

Nick Merlino as Self

Eric André as Self

Shaquille O'Neal as Self

Tony Hawk as Self

Francis Ngannou as Self