A movie that’s about reckless freedom and counter-culture communities needs to be less by-the-numbers than “Action Point.” There was a time when a movie from the creators of “Jackass” about an independent amusement park with rides on which ticket buyers can actually get really hurt would have been an obvious slam-dunk. Imagine the “Action Point” that would have been made between “Jackass” and “Jackass 2.” It would have been dangerous and intense. Steve-O would have ended up in the hospital, for sure. Believe it or not, “Action Point” in 2018 feels too safe. There’s way too much plot and even the stunts that gave Knoxville concussions feel routine. It’s not unlike seeing a once-great athlete attempt a comeback. There are flashes of what once worked, but it’s also a little sad.

Despite its many flaws, the plot of “Action Point” is so old-fashioned and affable in a “Revenge of the Nerds” manner that it’s a hard movie to truly hate. It’s just forgettable, especially when we’re asked to care about the paper-thin story. The structure of “Action Point” allows Knoxville to get into his old-man make-up that he used so well in “Bad Grandpa,” telling his granddaughter a story while babysitting one day. The story is one from about four decades ago, when grandpa, a man named D.C. Carver, owned the amusement park that gives the film its title, loosely based on a notoriously dangerous real New Jersey water park named Action Park.

As he starts to tell the story, he introduces the teenagers who worked at Action Point, and there’s a glimpse of a teen comedy like “Adventureland,” one that captures summer jobs that often define who we become more than our high schools. But the workers of Action Point are virtually interchangeable. None have a memorable personality other than maybe the hatchet-wielding, pill-popping “lifeguard,” played by “Jackass” regular Chris Pontius, a scene-stealer in the show and movies who never should have been given dialogue to read as a character. (Every line reading seems to come with a "Can You Believe I'm Acting" eyebrow raise.)

The only actual characters in “Action Point” are Carver, his daughter Boogie (Eleanor Worthington-Cox), and the real estate villain trying to shut down Action Point, played by Dan Bakkedahl. Of course, Action Point is struggling financially, losing business to a new super-park. Boogie has come to spend the summer with her dad, but her mother’s boyfriend is asking to become a legal guardian, and way more of “Action Point” is about the relationship between Carver and his daughter than the life-threatening rides at the amusement park. Even the opportunity to wax nostalgic about a more care-free time with fewer helicopter parents, which sounds like something perfect for the “Jackass” brand if you think about it, feels wasted on rather conventional father-daughter dramedy material. It’s obvious that this was once conceived outside of the “Jackass” brand and then revised to include crazy stunts.

About those stunts, which is probably the main reason you’re going, they lack the energy of the MTV show and movies based on them, even the one here that concussed Knoxville so badly that his eye popped out the next time he sneezed. The problem is the structure that forces the plot to somehow explain the stupidity. They need to do something for younger guests at Action Point, and so they go to wrangle up animals for a petting zoo. Seeing Knoxville try to catch a porcupine with his hands or Pontius put acorns in his shorts to bait a squirrel sound like obvious bits for a “Jackass 4” but lack danger and even humor as presented in the film. There’s something that’s just off about all of “Action Point,” including its stunts and plot, largely due to the flat direction and realization that we’re going to get back to a plot that’s difficult to care about. If you think about it, there’s arguably a better version of “Action Point” that is purely from Boogie’s viewpoint, that of a young woman learning the value of risk and the recklessness of youth. It would certainly have less Pontius in it.

The story goes that the crew behind “Action Point” had to build the whole thing in South Africa, and that Knoxville did all of the stunts himself, of course. Watching Knoxville and his team design some of these truly life-threatening rides and conceive the stunts would probably be more interesting than the movie that resulted from them. 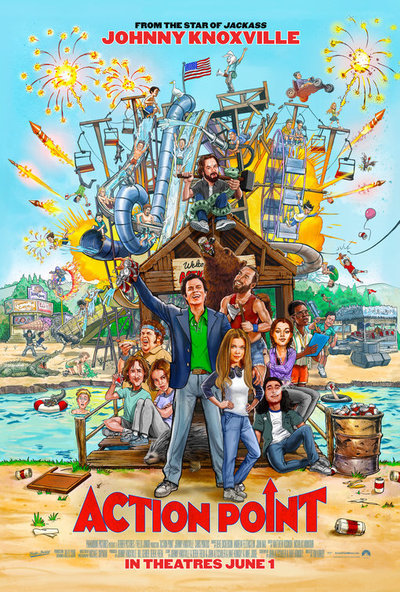