The dogs are very furry.

The look of the animal “actors” in “Isle of Dogs” is the film’s best feature. At times, it's hard to resist the urge to muss the imperfect fur that has been painstakingly rendered by director Wes Anderson’s animators. Especially if you’re a dog lover. As in “Fantastic Mr. Fox,” the stop-motion creatures take on the facial characteristics of the actors who play them, adding a comfortable layer of familiarity. Unlike that Roald Dahl adaptation, “Isle of Dogs” does not have a compelling story, and even worse, it has the most egregious examples of its director’s privilege since “The Darjeeling Limited.” This movie really pissed me off, and the only thing I found soothing while watching it was silently repeating to myself “the dogs are very furry.” Reminding myself of the film’s best asset kept me from walking out.

Anderson has gone on record citing the influence of legendary Japanese animator Hayao Miyazaki on “Isle of Dogs.” Films like “Spirited Away” and “My Neighbor Totoro” depict Miyazaki’s visions of Japan in ways that are both awe-inspiringly beautiful and terrifying. Even in his least successful ventures, the attention to world-building detail is staggering. You would think Anderson would be the perfect director to pay homage to this master of animation; no other director working today has a bigger compulsion for visuals than Anderson. But unlike the warm Miyazaki, Anderson is a very cold director. He keeps everything at an annoying hipster’s ironic distance, valuing aesthetics over meaning and context. This may work in the spaces of Anderson’s meticulously crafted universe of films like “Rushmore” and “The Royal Tenenbaums,” but “Isle of Dogs” is set in an actual foreign country whose culture and traditions Anderson unwisely commandeers. The results are cringe-worthy.

“Isle of Dogs” takes place in Anderson’s rather skewed interpretation of Japan. It’s a place where every explosion is rendered as a cutesy mushroom cloud and the public speeches always include haiku. It’s also a place where man’s best friend has been banished due to a dangerous outbreak of “dog flu,” which is apparently harmful to humankind. However, instead of being euthanized, each infected canine is dropped on a trash-filled island that evokes memories of “Wall-E.” As a show of solidarity with dismayed dog owners throughout the city of Megasaki, its mayor deports his own dog, Spots (voice of Liev Schreiber). Spots is the first of many dogs who will inhabit Trash Island, and he is the only one who’s privy to a rescue mission from the mainland.

12-year old Atari (voice of Koyu Rankin) is the mayor’s ward, an orphan whose parents were killed in a tragic accident. Spots was his companion and his security detail. He and Atari wore earpieces which served as a tracking device. Atari plans to use his earpiece to help him find his beloved pet. After crash landing his plane on the island, Atari meets the group of alpha dogs who serve as the film’s main characters. They’re a motley crew to say the least, and despite being born and raised in Japan, they don’t understand Japanese at all.

There’s the leader Chief (voice of Bryan Cranston) who fancies himself the group’s leader despite the group’s reliance on democratically deciding every decision. (Chief always takes the only contrarian vote, rendering him powerless.) There’s also former sports mascot Boss (voice of Bill Murray), who is still wearing his team’s jersey, and mustachioed former dog food commercial star King (voice of Bob Balaban). Scarlett Johansson shows up in a thankless role as the only female dog to have any dialogue. Chief calls her a bitch at one point, which I suppose is accurate as far as Webster’s is concerned.

Rounding out the alpha dog crew are Rex (voice of Edward Norton) and Duke (voice of Jeff Goldblum), who is so gossipy he puts Wendy Williams, Benita Butrell and TMZ to shame. When not getting information from a pug named Oracle, the dogs rely on gossip as their primary means of information. To quote “Pulp Fiction,” they’re “worse than a sewing circle.” Perhaps some of this potential misinformation will help Atari find Spots.

Back in Megasaki, a dog-loving scientist voiced by “The Last Samurai”’s Ken Watanabe is testing a dog flu antidote serum he’s created with his colleague Yoko (voiced by, you guessed it, Yoko Ono). The cat-loving mayor has nefarious reasons for keeping the serum from succeeding, and he isn’t above murder as a preventive method. Judging by this and “The Grand Budapest Hotel,” I get the feeling Wes Anderson doesn’t like cats. As a dog person myself, I understand. But cat lovers may find their scapegoating here a bit problematic.

Far, far more problematic is the character of Tracy (voice of Greta Gerwig). Tracy is an exchange student investigating the ouster of dogs for the school newspaper. She’s the only White person in “Isle of Dogs” and she is the film’s White savior. It is she who rallies the protesters against the mayor, raising her hand in what looks suspiciously like the Black Power salute (which, if you recall, Anderson last rendered on a wolf in “Fantastic Mr. Fox”). Speaking of Black Power, Tracy sports a hairstyle you’d normally find on Black people or, in a less extreme fashion, on Art Garfunkel. If Rankin-Bass were to do “The Rachel Dolezal Story,” they could hire Tracy, though in Ms. Dolezal’s defense, she’d at least know how to make an Afro look convincing.

Since most of the townspeople are against the mayor’s decree, this exchange student is a completely extraneous character who denies hometown residents the opportunity to be heard. The optics of her mere existence are disturbing in a film in 2018. The only time “Isle of Dogs” reaches for your sympathy is when Tracy is faced with deportation back to Cincinnati. And in the film’s most disgusting leverage of its privilege, Tracy physically assaults the grieving Yoko to get her to act against the crimes perpetrated upon her by the state.

There’s a lot of Japanese in “Isle of Dogs,” most of it untranslated by subtitles. When it is translated, it’s by an onscreen character voiced by Frances McDormand. Who wouldn’t want “Fargo”’s Marge Gundersen as their personal Babelfish? Perhaps a better question would be “why aren’t the Japanese people translated?” Atari, who is the catalyst for this story, remains untranslated until the very end, where most of his speech is in deference to how hot he finds Tracy, with whom he has had no prior interaction. I suppose Anderson thought he was being respectful toward Japanese speakers by giving them something only they could enjoy (much like Pixar does with Spanish in “Coco”). Instead, it only adds an “Otherness” to Atari and his compatriots. Why can we understand Atari’s canine cohort, but not him?

As always, the imagery is the best part of any Anderson film. “Isle of Dogs” is uglier and more devoid of color than Anderson’s prior works, but I liked the somewhat noirish appeal of the grunginess of Trash Island. The canine voice actors know how to speak Anderson’s dialogue and make it seem natural coming from their snouts. But as entertaining as it is to look at “Isle of Dogs,” I couldn’t get past Anderson’s usual clumsiness when dealing with minorities. This is a film where a character is literally whitewashed, an act that makes him more agreeable afterwards. “Isle of Dogs” treats this as a sight gag. It plays more like a confession. 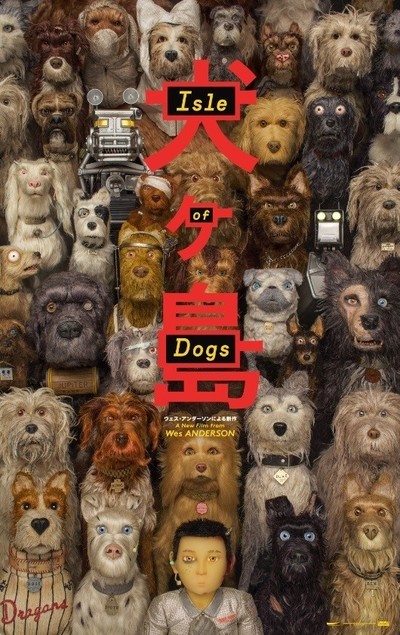 Rated PG-13 for thematic elements and some violent images.

Courtney B. Vance as Narrator (voice)