Few documentaries match subject and filmmaker as perfectly as “Iris.” Fashion icon Iris Apfel and documentarian Albert Maysles were well on in life when he set out to make a verité portrait of her: she in her early 90s, he in his late 80s. Both were quintessential New York characters with their own senses of style. Each possessed an obvious zest for life as well as a well-developed, self-deprecating sense of humor.

Iris reportedly wasn’t interested in being filmed…until she met Al Maysles. His charm evidently won the day, and brought out her own. The film, in a sense, is not just a record of her career and flamboyant contributions to the worlds of interior design, fashion and costumes. More subtly, it’s also a document of her convergence with Maysles. Their chemistry only becomes visible in a few scenes where the camera and her attention turn to him, but it animates the whole film, giving it a suppleness and warmth that are as ingratiating as the personalities on view.

Iris herself is a filmmaker’s dream. Born to Jewish parents in Depression-era Queens, she learned early on that she wasn’t pretty, but was told by a mentor that she had something more important: style. She remarks later in the film that the girls who were pretty had nothing once their looks faded. But she had worked and learned things that transformed her and would remain with her even as she reached her tenth decade.

Her style has made her into the equivalent of a walking exclamation point. With her trademark ultra-large round black-framed glasses, angular frame and swept-back white hair, she could be the creation of a great cartoonist. But her self-creation is never-ending, because the basic look is constantly expanded and refashioned by her choices in clothing and accessories.

For the former, she displays a relentless eclecticism, mixing the creations of great designers with thrift-store discoveries, jeans, religious vestments from around the world and just about anything that catches her fancy. In terms of accessories, she favors huge and eye-grabbing necklaces and bracelets, sometimes several at once. And her palette is never dour or restrained, since she believes “color can raise the dead.”

This may sound like excess simply for the sake of excess, but Iris also has an ingenuity and innate tastefulness that gives her creations an intriguing aesthetic logic to match their sensual fascinations. We see her dressed in scores of her own ensembles, and their playfulness—together with her obvious joy in wearing—helps explain why she became a cultural icon.

That didn’t happen overnight. Iris was known in the worlds of fashion and design for decades, but it wasn’t until the Metropolitan Museum of Art in New York staged a show of her work in 2005, and it turned into a big word-of-mouth hit, that she became a public celebrity—or a “geriatric starlet,” as she puts it.

Even at 93, Iris is a great talker and she has an obvious passion for certain subjects. To photographer Bruce Weber, a longtime friend, she bemoans current designers who “don’t even know how to sew,” who have no sense of history and allow themselves to be turned into “media freaks.” She’s equally spirited in explaining why she has always believed that politics, science, economics and fashion are all interrelated, with changes in one area invariably influencing all the others.

She rarely slows down, and Maysles’ team follows her through a profusion of meetings, shows, TV appearances, openings and trips between her homes in Manhattan and Palm Beach. Having practiced his verité style in such legendary films as “Grey Gardens,” “Salesman” and “Gimme Shelter” Maysles was undoubtedly the ideal cameraman to enter Iris’ life and simply observe her non-stop activity, and his visual eloquence is an understated but constant asset to “Iris.”

Al Maysles, a great fixture in the New York film scene and an influence on several generations of documentary filmmakers, was a keen, understanding observer of human nature and behavior from the 1950s up until his death last month at age 88. “Iris” and another recently completed film, “In Transit,” will stand as testaments to his unique talents and contributions to the documentary form. 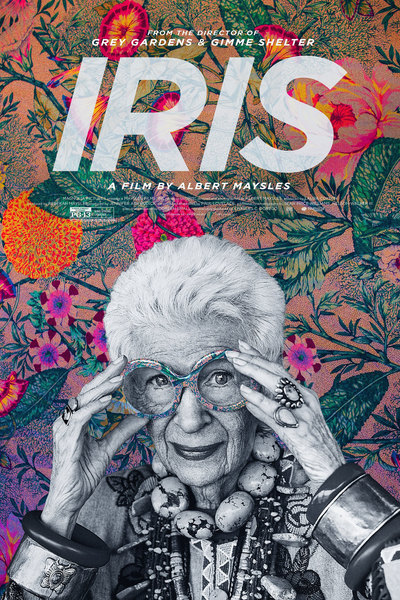