Into the Dark: Culture Shock

Who expected the tenth installment of Hulu and Blumhouse’s series of holiday-themed horror films to be the best one? A lot of people I know gave up on “Into the Dark” a few months ago, right around the multi-month run of “Down,” “Treehouse,” “I’m Just F**king with You,” and “All That We Destroy” – a quartet of films that range from disappointing to horrendous. It was hard to blame anyone who jumped ship, but last month’s “They Come Knocking” proved that there was still some life in this franchise, and July’s “Culture Shock,” directed by Gigi Saul Guerrero, makes all the garbage I’ve had to sit through worthwhile. It’s ambitious, fascinating, and features the best ensemble yet for “Into the Dark,” anchored by a fantastic performance from Martha Higareda. Happy Independence Day, indeed.

Higareda stars as Marisol, a young woman desperate to cross the border from Mexico to the United States. Yes, “Culture Shock” tackles the hot-button issue of immigration but does so in a way that feels subversively progressive instead of merely exploitative of the real-life struggle taking place on our Southern border. “Into the Dark” has played with gender, social, and political issues before, but never in a way that felt this original or woven into a narrative instead of just forced into one. The other near-great “Into the Dark,” Sophia Takal’s “New Year, New You,” didn’t just exploit the issue of bullying but had something new and interesting to say about how its inherent in the self-help movement. Similarly, “Culture Shock” doesn’t just use immigration as a hollow subject matter; its subtext about the falsity of the American Dream and the exploitation of foreign bodies reminded me of “Get Out” in its ambition.

Marisol is very pregnant, the result of a rape by someone she knew and trusted named Oscar (Felipe de Lara). Despite that trauma and the impending birth, she’s determined to head North, paying a coyote (the great character actor Sal Lopez) to take her across the border. The first act of “Culture Shock” – and it really has three distinct acts in terms of not just storytelling but style – is a harrowing thriller about the risks involved in border crossing. Marisol befriends a child named Ricky (Ian Inigo) and is saved from another sexual assault from a mysterious, heavily-tattooed former criminal named Santo (Richard Cabral). And then the cartel finds them, forcing them to flee.

With a cinematic splash of cold water, “Culture Shock” shifts gears entirely. Gone is the darkly-lit, handheld-shot, entirely subtitled tone of the first act, replaced by something surreal and terrifying in an entirely different manner. Echoing Tim Burton and David Lynch’s takes on suburbia, Marisol finds herself in an exaggerated version of the American Dream. She’s being cared for by a woman named Betty (the always-great Barbara Crampton), who smiles a little too broadly and says things like, “You can judge a woman by the taste of her homemade soup.” It’s the dream version of America that is promised to immigrants but doesn’t really exist – one in which everyone gets along all the time and fireworks fill the sky. Marisol can tell something isn’t right, but she seems to be the only one.

“Culture Shock” takes another hard right turn in the final act that isn’t quite as successful as the first two, but still admirably ambitious. Writers Guerrero, James Benson, and Efren Hernandez kind of write their story into a corner from which it is difficult to produce a horror movie climax, even if they add a hefty dose of gore in an attempt to do so. Still, more of the ending is clunky in terms of filmmaking and screenwriting than I was hoping for during the legitimately great first hour, but it’s not nearly drastic enough to sink the goodwill already generated by that point.

A lot of that built-up goodwill comes from a truly great cast. Higareda is asked to do a lot of heavy lifting selling a narrative that makes her have to convey both trauma and strength within what is often a very surreal construct. She’s excellent, and she’s matched by great turns from Crampton, Shawn Ashmore, and especially Richard Cabral, an actor I found fascinating on “American Crime” and I would really love more filmmakers to find and hire. He’s always great.

There are probably only two “Into the Dark” movies left for August and September, unless they decide to go around the calendar one more time. A few months ago, the thought of another year of genre mediocrity would have made me woozy. If we get another “Culture Shock” out of the deal, count me in. 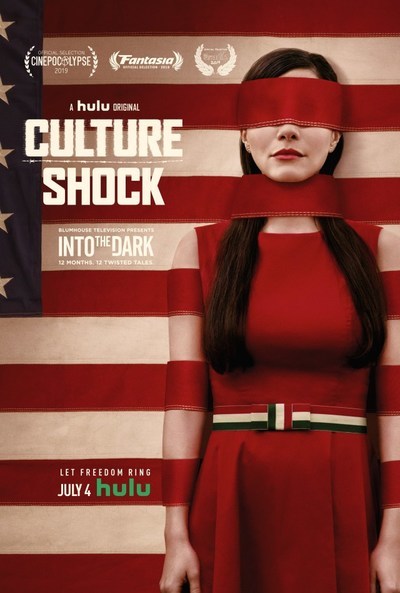