Into the Dark: Down

“Into the Dark,” Hulu’s monthly series of holiday-inspired horror movies, appeared to be finding its groove after a couple of rocky outings were followed by two decent genre flicks in “Pooka!” and “New Year, New You.” In fact, the first four installments progressively got better. Of course, it was silly to presume this was a pattern that would continue over the next eight, but the very vaguely Valentine’s Day-themed “Into the Dark: Down” is the worst entry yet in the series, a disappointment on multiple levels. It’s from a subgenre of horror that usually works for me – trapping two characters in a confined space and letting them bounce off each other – and it’s got a talented director in Daniel Stamm. But the script here could generously be called inconsistent, more accurately a mess, and even more accurately kinda gross. I’ve often said that horror movies would work better in the hour-long format of something like “Masters of Horror,” but this one only possibly could have worked in the half-hour format of something like “Tales From the Crypt,” and it still would have been a subpar episode of that.

The set-up for “Down” is incredibly simple (in a way that I kinda like): the last two people to leave an office building on a long holiday weekend (Valentine’s Day and President’s Day) get stuck in an elevator on their way to the parking garage. It is very likely that no one will come for them for 72 hours. And so Guy (Matt Lauria) and Jennifer (Natalie Martinez) get to know each other. And I do mean get to know each other. They have a very playful, cute relationship that even evolves unbelievably quickly into stuck elevator sex. And then “Down” transitions from romance to horror. If you’re spoiler allergic, turn away, but one needs to talk about the turn in “Down” to really discuss what’s wrong with it.

Shocker! Guy is a stalker. It’s actually a turn that’s relatively easy to see coming early but I kept hoping that Stamm and Kent Kubena had an angle on it that I wasn’t expecting. They didn’t. Guy is actually the security guard in the building, and he’s been stalking Jennifer. The way this turn plays out feels disturbingly punitive to Jennifer. The hard-working young lady who scheduled a flight at midnight so she could get enough done to go try to fix a broken relationship and then has a moment of sexual freedom has to get abused and beaten by a stalker too? Hasn’t horror evolved beyond this kind of “sexually active characters suffer” model that dominated in the ‘70s and ‘80s?

Ignoring the icky sexual politics of “Down,” it makes increasingly less sense as it progresses. Jennifer is played by Martinez as a confident, strong woman, whereas Guy is an unstable ball of emotions. Wouldn’t she just literally beat the crap out of him? There are beats in which she almost seems to forgive him for kidnapping her and having sex with her under such false pretenses that it could probably qualify as a crime. And that’s insane. It feels like this is a subject matter – stalking and obsession – that could have been played for social commentary but this is a script stuck in horror’s past and even a relatively charming performance by Martinez and workmanlike direction from Stamm (“The Last Exorcism”) can’t save the screenplay’s many problems. The title is particularly apt for the direction the “Into the Dark” series takes this month. 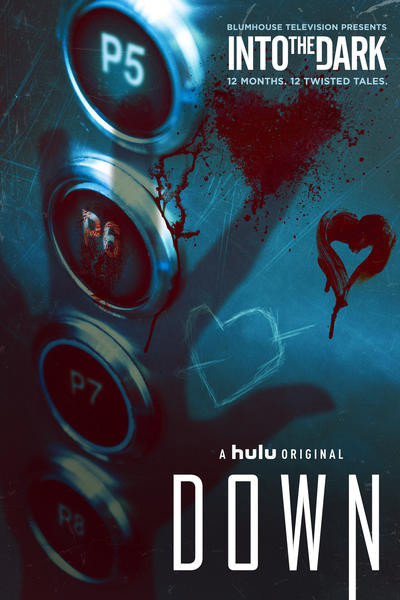