Into the Dark: Treehouse

The latest installment in Hulu’s monthly series of original horror films, “Into the Dark: Treehouse,” is just good enough that you wish it was better. Not only does it contain the best ensemble yet in one of these Blumhouse-produced films, but it couldn’t be more topical as more and more men face a reckoning for their awful past behavior with women. Horror has often turned to stories of justice for past wrongs, but it will be interesting to see how the #MeToo and #TimesUp era impacts the genre over the next few years. “Treehouse” is an early entry in a genre I expect to get pretty crowded—tales of abusers getting what’s coming to them.

The Harvey Weinstein of this situation is a celebrity chef named Peter (the great Jimmi Simpson of “Westworld”), clearly modeled after Gordon Ramsay. He’s the kind of TV personality who yells at more inexperienced chefs on national television. In other words, he’s made a career out of being an abusive asshole. And that’s because that’s what he is in his private life too, although “Treehouse” struggles sometimes with how we’re supposed to see Peter. At first, the extent of Peter’s villainy is unclear. After all, he’s nice to the daughter he doesn't spend enough time with and he IS the protagonist of “Treehouse,” even if it’s clear he’s going to learn a lesson or two before the movie is over.

Peter heads home to lie low as conversations about another looming controversy that's about to break hang in the air. He runs into his sister Gwen (Amanda Walsh) for the first time in ages and interacts with his irascible housekeeper Agnes (Nancy Linehan Charles). On the way to his family’s vacation house, he also sees a face from the past in the creepy Lonnie (Michael Weston), who still runs the local bait shop. At first, it appears that “Treehouse” may be a riff on Joel Edgerton’s “The Gift,” in which a cocky man is tormented by someone he bullied in the past.

This is not that movie. It shifts when Peter is visited by a girl named Kara (Julianna Guill), who tells him that their bachelorette party nearby has hit a snag—they’ve lost power. First, Peter just gives them some candles and flashlights, but then he decides to be magnanimous enough to cook them dinner. The party comes over to Peter’s house and includes the bride (Shaunette Renee Wilson), her mother (Mary McCormack), and friends played by Sutton Foster, Sophia Del Pizzo, and the great Stephanie Beatriz of “Brooklyn Nine-Nine.” As Peter gets drunker and drunker, his truly awful side turns up to 11. He makes uncomfortable jokes at everyone’s expense, and it’s clear that the tables will be turned on Peter before long. However, exactly how those tables flip won’t be spoiled here.

Let’s just say that “Treehouse” is about a man being forced to answer for his past abusive behavior. Peter isn’t just a jerk. He’s a criminal. And he’s the kind of criminal just rich and famous to keep getting away with it. Until now. The reckoning for Peter is interesting in the way it’s pulled from the headlines, but it’s not that engaging cinematically. Simpson is typically great, but director James Roday (star of “Psych” and “A Million Little Things”) can’t quite manage the tone and the film looks depressingly flat (and sometimes even worse). “Treehouse” is interesting from afar instead of ever being actually tense or scary. One also has to wonder if it’s told from the wrong side. Imagine this story from the perspective of the women seeking vengeance instead of from the man being taught a lesson. In other words, imagine a much darker, more vicious version of this story that says violence will be met with violence and feels like the stakes are higher than a “jerk learning a lesson.”

Far more than last month’s “Down,” there’s a lot to like here. Simpson is a fantastic actor, and Beatriz, McCormack, and Weston are always welcome faces, even if they all feel kind of wasted here (especially Beatriz). Almost every other scene in “Treehouse” gives you that feeling of “Yeah, that’s a good idea, but ...” It’s halfway there, which is more than you can say about some of the installments of “Into the Dark” but less than this story deserves. 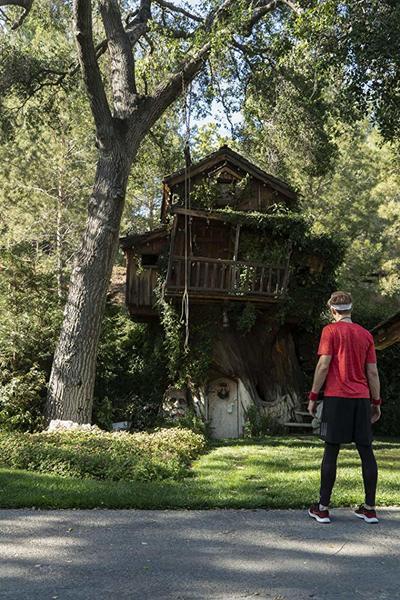