Into the Dark: They Come Knocking

Grief and horror are often intertwined. How many ghost stories have we seen that are really about the overwhelming emotional devastation of grief? It’s an emotion that turns the world inside out, and so it makes sense that writers would use it as a foundation to tell stories of things that go bump in the night. When we lose someone close to us, we often feel a closer tie to the other side, whether it’s hope that our lost loved one is happy in the afterlife or just a deeper connection between life and death than we had before. The best installment of Hulu’s monthly horror series, “Into the Dark,” works off the emotional tumult of grief to craft an effective little genre pic that could have been truly great at half the time. There’s a lot to like in “They Come Knocking,” but it’s all been stretched to the breaking point and reminds one that the feature-length running time of these films have not been to the creator’s advantage. This really would have worked at 45-60 minutes but sags a bit too much and hits too many of the same beats at 85. Still, there’s enough to like to be at least a little hopeful about this series for the first time in months.

“They Come Knocking” is basically a three-hander with a father named Nathan (Clayne Crawford of “Rectify”) and his daughters—Clair (Josephine Langford) and Maggie (Lia McHugh)—on a road trip. They’re headed to a place well off the grid to spread the ashes of Val (Robyn Lively), the matriarch of their family who recently passed away. Watching your mother die is something no young person should have to suffer through, and it has impacted the girls in a way that Nathan isn’t quite sure how to overcome. The girls fight a lot, and the older one blames her father for not fighting hard enough to save mom’s life. Throw this powder keg of emotion into a desolate part of the country and you have the set-up for a thriller.

It starts with a face in sunroof window and escalates quickly to someone or something knocking loudly on the door of the mobile home in which our heroes are staying. They are far from civilization. Who could possibly be knocking? Things get creepy fast when they hear what sounds like a child’s voice asking if it can come in. Of course, the answer is no, and Nathan seems confident he’s been able to scare the creepiest kids on Earth away from his family. He’s startled when he wakes up the next morning to find his car disabled, but really only panics when he stumbles upon evidence that whatever was on his doorstep last night is way more dangerous than he first suspected. And then things get really weird.

The threat of “They Come Knocking” is very vaguely defined in that it’s hard to tell for awhile if the creepy, hooded children are supernatural or psychopathic. The fine line allows director Adam Mason to play with two genres as his second “Into the Dark” (he also helmed “I’m Just F*cking with You”) dabbles in both home invasion horror like “The Strangers” and something more akin to a ghost story. But while that may sound fun, it leads to a bit of tonal inconsistency. Part of me wanted the film to commit to a genre and to define exactly what was happening to this poor family in the middle of nowhere. However, the unwillingness to do so does allow for some of the most effective moments and imagery of the series, and fits in well with the idea that grief turns the world upside down, blending reality and the unexplainable.

While there’s clearly more to like here in terms of execution than recent installments of “Into the Dark,” “They Come Knocking” still sags due to its lengthy running time. There are just enough flashbacks to Val’s final days that it crosses the line from effective to manipulative. With horror, sometimes less is more, and that’s certainly the case here. The final act, which deftly captures how differently parents and children respond to loss—he blames himself while his youngest just misses her mommy—would have been way more effective if the film didn’t have to spin its wheels for so long to get there. And the repetition forces the young actresses to have to repeat acting beats and then eventually just turn up the emotion to a degree that doesn’t really work.

Still, I have to admit to a bit of dread as I approach each new “Into the Dark.” It’s been five months since Hulu offered one that worked (“New Year, New You”) and the ones since then have ranged from disappointing to awful. With “They Come Knocking,” we’re closer to the positive side of the genre, indicating what this series could be. It may not be perfect, but at least it’s allowed me to hope that there could be another great chapter in the final quarter of this ambitious enterprise. 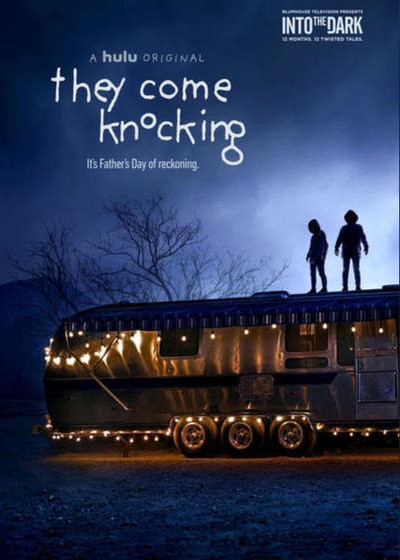