Is "Interior. Leather Bar" shocking? Codirector James Franco says yes, "but only because every toilet paper commercial has a man and a woman living in a house together."

The actor-filmmaker-writer-film critic-Oscar host-open heart surgeon (that last one is a joke) makes this statement in one of many interviews showcased within this smart, odd, short, ultimately unsatisfying feature. "Interior. Leather Bar" is being sold as Franco and codirector Travis Mathews' imagining of the 40 minutes that the ratings board made director William Friedkin cut from his 1980 thriller "Cruising," an Al Pacino thriller about a straight cop navigating the "gay underworld", to avoid an X-rating. But the project isn't quite what it purports to be. The "re-imagining" of the Friedkin picture's deleted leathery grinding takes up less than 15 minutes of this movie's one-hour running time. The rest is a documentary that observes present-day actors (including Franco's friend Val Lauren in the Pacino role) as they rehearse and shoot the re-imagined scenes.

Although Franco identifies as straight, he's told many gay-themed stories as an actor, fiction writer and filmmaker. He's said he's drawn to this material out of personal fascination and a sense of social justice. As far as he's concerned, there isn't enough sex in popular culture—or enough flavors of the frank and real and artistically expressive kind of screen sex, as opposed to the sunlight-through-venetian-blinds-and-closeups-of-intertwined-hands kind of sex. And the overwhelming majority of screen sex is between men and women.

Franco busts out the word "normative" in one of the interview segments, and it doesn't feel forced, because that's ultimately what "Interior. Leather Bar" is about: the difficulty of trying to tell gay stories in a heteronormative world. Franco wants to know why screen sex can't just be a storytelling tool. Why is it possible to have many varieties of violence in a film and still have kids be able to see it, while even mildly explicit sex will earn an automatic "R" rating? As actor Jack Nicholson observed in the 1970s, cut a woman's breast off with a sword and movie is rated "PG"; touch it and it's an "R." He was exaggerating, but not by much.

"People like sex," Franco tells Lauren, in a long scene where they sit in front of a window during a break in shooting and discuss the explicit imagery in "Interior. Leather Bar" and what, if anything, it will do for—or to—Lauren's acting career. "Everybody f-----g watches porn. they just don't want to talk about it in public." Or watch it in movies—especially if it's gay sex. Straight sex in a mainstream movie can just be sex. Gay sex usually has to be about about what it means to be gay, unless the film in question is a relatively small film that's aimed at gay audiences—in which case you can rest assured that the vast majority of straight moviegoers will never see it, because they think they won't relate, or because they think gay sex is "gross." This, in everyday terms, is what "heteronormative" means.

"Maybe that's it, man," Lauren says, shooting the breeze with fellow actors. "The ideas of things are so much f-----g bigger than they actually are."

It doesn't take long to figure out that "Interior. Leather Bar" won't spend much screen time re-creating lost footage from "Cruising." The film is mostly talk interrupted by occasional shots of flirtation or sex between men in studded leather. After a while you catch on that the talking is probably scripted as well (or improvised from a scene outline). Mathews, who's credited with editing and writing "Interior. Leather Bar", always seems to be in just the right place with his camera to get an attractive yet functional shot, and there's often more than one camera covering important moments. Even if all the actions captured by the filmmakers were truly spontaneous, you'd still question how "spontaneous" they were, because almost everyone onscreen is a professional actor.

So what are you looking at, really? Is the movie a bait-and-switch? Probably. The film has fun with the idea that nobody would have gotten involved were it not for the chance to work with James Franco and perhaps perform in a sex scene with James Franco (there are no sex scenes involving James Franco, if you were wondering). How much does Franco really have to do with the project, though? Maybe not as much as we're led to think; the more you watch "Interior. Leather Bar," the more apparent it seems that Mathews is its creative force, and Franco is there mainly to lend industry clout and a famous name, and indulge his sociopolitical and personal agendas along the way.

I've seen quite a few movies that try to do what "Interior. Leather Bar" is doing: get audiences to think about what "normal" means, and how tough it is to get sexually frank stories about homosexual characters and situations in front of heterosexual audiences who are conditioned to think of all sex as "deviant" if it's not straight (or "tasteful," meaning brief and suggestive). And I've meet very few straight moviegoers who aren't film critics (or film buffs) who've seen those sorts of movies. That's because straight moviegoers are raised to think that stories involving gay people are foreign to their experience. There has to be an obvious way into the story for them, such as a homophobic lawyer character ("Philadelphia") or a ruggedly macho "family man" who identifies as straight ("Brokeback Mountain"). They can identify with hobbits and space smugglers and displaced Kryptonians, but not gay people.

This, again, is what "heteronormative" means, and it's what Mathews and Franco are fighting against. "Interior. Leather Bar" is ultimately more an idea for movie than a movie, the rap sessions ramble, and it feels half-baked by the time it gets to its climactic twist, which isn't as clever as it thinks (by that point the audience is way ahead of it). But as fiction about storytelling, it holds together pretty well. Even when Franco is prattling on about his desire to free moviegoers from their psychosexual chains—as if he's the handsome film star equivalent of Lawrence of Arabia or the guy from "Avatar," a straight messiah-liberator helping the impotent queer nation touch hearts and minds—the movie somehow works. It's self-aware and self-deprecating. "Cruising" is a safari just as this film is a safari. Its tour guide is an interloper trying to convince the natives that he's one of them. 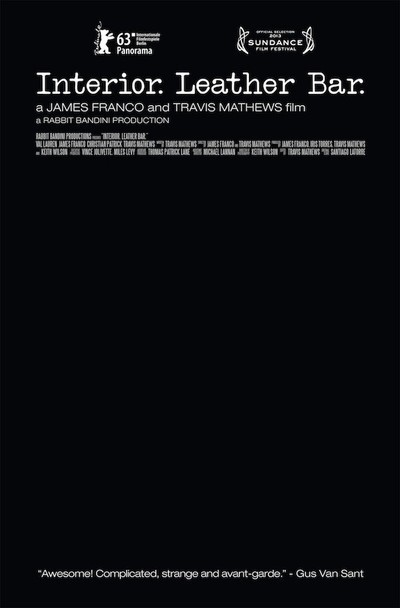