Powered by JustWatch
Lin Shaye is one of those character actors—like Margo Martindale and Stephen Tobolowsky—who have worked steadily for decades in a wide variety of supporting roles and they always make everything better. Even if they just appear in a few scenes, you’re always glad to see them and you wish you could see them more.

With “Insidious: Chapter 3,” Shaye finally gets her “more.”

Her character, veteran psychic Elise Rainier, was the most compelling figure in the first two “Insidious” movies, which were surprise, low-budget hits in 2011 and 2013. Writer and co-star Leigh Whannell, who created the series with James Wan and directs for the first time here, wisely places her front and center and gives her plenty of room to shine.

Shaye, whose best-known roles prior to the “Insidious” franchise have been in the Farrelly brothers favorites “There’s Something About Mary” and “Kingpin,” gets a chance to show an unusual amount of range for a horror movie heroine, from sadness and vulnerability to strength and resiliency. She’s just as effective with a sympathetic look as she is with a well-timed quip. It’s a joy to see such a seasoned performer seize her place in the spotlight at last.

But making you happy is not the first priority of “Insidious: Chapter 3.” It wants to scare the hell out of you, and it does that quite effectively with several serious jumps. About a half-dozen times, I’d say, Whannell creates moments that are legitimately surprising and frightening because he uses silence so well in contrast. I leapt out of my seat and grabbed the arm of the critic sitting next to me so often (and he did the same, although he shall remain nameless) that you’d think we’d never seen a horror movie before. Whannell’s imagery is that solidly creepy and his pacing is that precise. He indulges in a few artsy camera angles and movements, but mostly directs in able and understated fashion.

But beneath the scares, there is a substantial emotional undercurrent. By the end, you feel the characters’ sense of loss and grief, of catharsis and eventual closure. There are legitimate stakes here, not just cheap thrills. “Insidious: Chapter 3” is more intimate and mournful than its predecessors—and perhaps not as consistently, suffocatingly scary—but maybe that’s a good thing. The series needed to go in a different direction rather than repeating itself, and in doing so, it brings things full-circle.

Having said that, you definitely need to have seen the first two films to understand why certain characters and their relationships matter, who the various demons are and how, if at all, these hauntings are intertwined. You could come into the third film cold but it might not hold as much meaning as it could. That’s because “Insidious: Chapter 3” is a prequel which takes place a few years before the haunting of the Lambert family, led by Patrick Wilson and Rose Byrne’s tormented and terrified husband and wife. It details how Elise became the fearless medium we now know her to be through an ordeal that helped her get her mojo back.

High school senior Quinn (Disney Channel alum Stefanie Scott), mourning her mother’s death from cancer a year and a half earlier, seeks Elise’s help in contacting her. Reclusive in her bathrobe in the middle of the day, Elise insists she doesn’t do that sort of thing anymore, for reasons that eventually become achingly clear. But she feels sympathy for this grieving girl and gives in, even though she’s all-too familiar with the types of evil spirits she might reach instead.

Turns out, the ghostly presence Quinn thinks is her mother is actually a predatory soul with an icky past and nefarious plans for the future. (The gooey, black footprints that start appearing all over the place should be the first clue that something is amiss.) But the whole family has been in a state of chaos and confusion since Quinn’s mother’s death, to the extent that nothing makes sense anymore: her scattered father, Sean (played with borderline sitcom cluelessness by Dermot Mulroney), and bratty younger brother, Alex (Tate Berney).

A startling car accident that leaves aspiring actress Quinn with two broken legs renders her even more helpless to the ghost’s advances; her immobility, and her inability to protect herself, provide much of the tension here. Like something out of “Rear Window,” all she can do is watch and wait for inevitably terrible events to occur—just like us.

And so Sean and Quinn reach out to Elise one more time and plead with her to help purge this dark spirit from their home (a historic Hollywood apartment building rather than a charming and creaky Craftsman or Victorian). At the same time, younger brother Alex has found a pair of self-styled ghostbusters through their YouTube channel who might be of assistance: Specs (Whannell himself) and Tucker (Angus Sampson), the bumbling and bantering duo who provided much-needed comic relief in the first two films.

Watching Elise summon her inner strength to fight enemies on all sides in various dimensions—some of which exist in long, carpeted apartment hallways decorated in “Shining” chic—is the film’s real thrill. And if/when he makes “Insidious: Chapter 4,” Whannell would be wise to let her show what she can do once more. Petite and feisty, she’s the most capable person in the room—alive or dead—and easily the most fascinating. 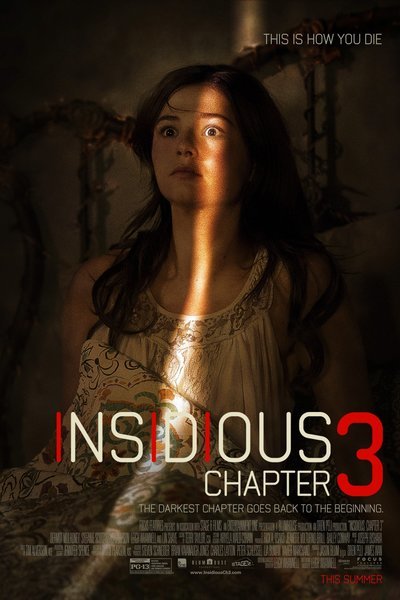