In 2006, “The Da Vinci Code” made people angry before they’d even seen it: Catholics, albinos, fans of the Dan Brown airport novel who were preemptively riled up in expectation of Ron Howard’s film version not doing it justice. The 2009 follow-up, “Angels & Demons,” made people angry simply because it wasn’t as good as “The Da Vinci Code”—even though it managed to be more entertaining and less self-serious than its predecessor.

All these years later, whether or not you were hankering for Brown’s particular brand of hokum, Howard has adapted yet another bestseller in the author’s series: “Inferno.” It’ll probably annoy people more than anger them, though, because it’s just so silly and scattered. Howard and “Angels & Demons” screenwriter David Koepp are all business when it comes to delivering the doom and gloom, which is of the literary rather than the religious variety this time. But the multiple twists, double-crosses and leaps in logic are more likely to prompt giggles than gasps, despite the impressive production values and the earnest efforts of an A-list cast.

Tom Hanks is back once again as Harvard symbologist Robert Langdon, the understated hero of the series. Hanks’ performance is a prime example of what he does so well: He establishes that Langdon is the smartest man in the room at all times, but still manages to make the character an accessible everyman. It’s easy to take for granted what a tricky balancing act this is, simply because Hanks makes it look so effortless. By now, it’s his bread and butter. If only it were in the service of better material.

At the film’s start, Langdon has awakened in an Italian hospital room, not knowing where he is or he how he got there. Sweating and panicking, he suffers from excruciating headaches and the disturbing images that flash through his mind: hellish visions of twisted bodies burning and writhing in pain and surging rivers of blood. Soon enough, though, he’s on the run alongside the emergency room doctor who’s been treating him: the brilliant prodigy Sienna Brooks (Felicity Jones).

Various factions with conflicting agendas are after him because he’s in possession of an object that’s crucial to solving the mystery of where a global plague is about to be unleashed. Before plunging to his death, Dante-obsessed billionaire madman Bertrand Zobrist (Ben Foster) had warned that overpopulation would spell humanity’s demise, and argued that killing untold millions with a high-tech disease would be the only way to preserve the planet for the greater good. Langdon is the only man who can stop the devastation … by deciphering anagrams, of course.

It’s all as insane and convoluted as it sounds. At the same time, Hanks is stuck with really obvious, explanatory dialogue like: "This map is a trail he left so that someone can find it."

Howard’s pacing is anxious and breathless, punctuated by shrieky sound design and Hans Zimmer’s insistent score, as Langdon and Brooks travel from Florence to Venice and Istanbul. Together, they piece together complicated clues with dizzying speed, trade tidbits of Dante arcana and try to stay a step ahead of the bad and/or good guys who are after them. These include an assassin posing as a motorcycle cop with the tenacity of the T-1000 and some shockingly well-armed agents from the World Health Organization. Omar Sy brings a dash of class and mystery as one of the prime pursuers and Sidse Babett Knudsen, as a WHO executive, creates the rare character here who not only feels like a real person but a grown-up amid all the madness. (The romance between her character and Hanks’, however, feels half-baked, despite how pleasing the two actors are together.)

Foster isn’t on screen long enough to function as much more than a concept as he spouts ominous lines like: “Humanity is the disease. Inferno is the cure.” The likable Jones, meanwhile, serves as a sharp and plucky foil to Hanks’ straightforward Langdon. Intellectually, she’s his equal—but she’s also forced to run in heels a lot.

The one who nearly runs off with the entire movie, though, is Irrfan Khan as the coolly calculating leader of a shadowy security agency known as The Provost. With his impeccably tailored suits and an arsenal of ornate daggers, he may be yet another bad guy—but then again, he may be a good guy. One thing’s for sure: He’s the only one here who realizes how ridiculous “Inferno” is, and he’s having a blast with it. 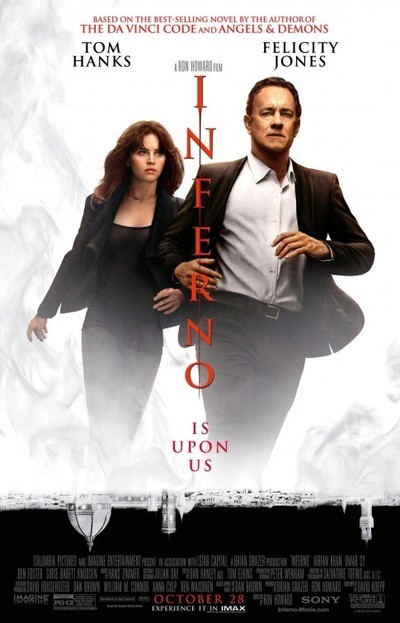