In the Shadow of the Moon

“Seven” meets “The Terminator” in one of the weirdest genre mash-ups you’ll see all year, Netflix's “In the Shadow of the Moon.” If that pitch sounds odd to you, it really only scratches the surface of a flick that starts as noir, proceeds into action and then dives into a pit of science fiction. While director Jim Mickle has balanced disparate genres and tones before in films like “We Are What We Are” and “Cold in July,” he loses control of this one, thanks in no small part to a bland performance at the center of the maelstrom. An odd film like this needs a charismatic anchor in its lead role to keep it from losing its human connection and Boyd Holbrook just can’t muster the energy to do that. It’s a strangely flat, unengaging performance that doesn't match the ambition of the overall piece.

Holbrook plays Tom Lockhart, a Philly cop whose life changes on a night in 1988. Just before his very pregnant wife (Rachel Keller) goes into labor, Tom stumbles upon the weirdest case in the history of the city of brotherly love. A bus driver, concert pianist, and fry cook all die at the exact same time, their brains literally spilling out of their eyes, ears, and mouths. They all have puncture wounds and a suspect soon surfaces, a young black woman in a blue hoodie (Cleopatra Coleman). Lockhart and his partner (Bokeem Woodbine) soon track the woman, who seems to know a great deal about Tom, including that his wife is about to have a baby girl. It’s almost as if they’ve met before.

After what appears to be a violent end to a strange story, “In the Shadow of the Moon” jumps ahead to 1997, when it looks like a copycat is repeating the same crimes as nine years earlier. But what if it’s not? What if it’s the same person as in 1988, brought back on the nine-year-cycle of the blood moon? Every nine years, Lockhart goes deeper down the rabbit hole of the case that changes not just his life but the future of our entire civilization. Michael C. Hall lingers around the edges to call Lockhart crazy every nine years in the thickest Philly accent cinema has seen in a generation.

Merging a procedural about an obsession with a single case like “Zodiac” with sci-fi elements is a clever idea for a B-movie but “In the Shadow of the Moon” isn’t fun enough to qualify as that. Holbrook and Mickle take themselves way too seriously and force the final hour of the movie into gigantic exposition dumps. This is a classic example of a movie that gets less interesting as we answer more of its questions, and would have worked better if it didn’t feel the need to dot every ‘I’ and cross every ‘T.’ We put together most of the mysteries of “In the Shadow of the Moon” before Lockhart, which drains the back half of a lot of the tension it needs to work as a thriller.

Sometimes a movie that is a bit of everything can end being not enough of anything. “In the Shadow of the Moon” isn’t effective as sci-fi, action, noir, mystery, or even social commentary, even though it has elements of all of the above. What saves it from complete disaster is Mickle’s technical skill—he washes the film in nice blues and grays with cinematographer David Lanzenberg, although even that feels like it could have been leaned into more. It’s a film that needed more style and more personality, especially in its center, to keep its various tones tied together. Instead, they get lost in the dark. 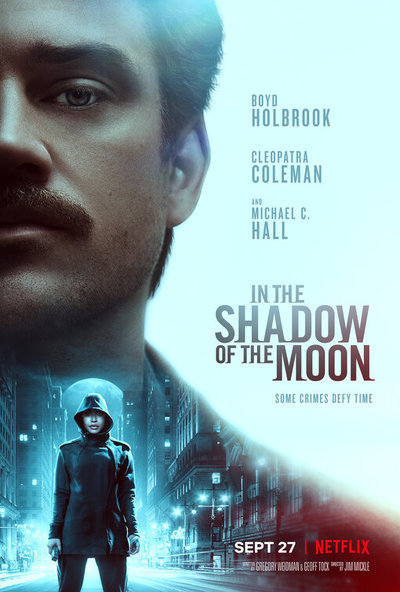