In My Father's House

A lot of history can be found in Che “Rhymefest” Smith’s basement. There’s a picture of Che with Kanye West, which recalls their friendship from when they were young rappers hustling in Chicago, now sharing a Grammy for co-writing West’s smash single “Jesus Walks.” A few feet away is another picture of Che and current U.K. Prime Minister David Cameron from when the two met in 2006 in London to discuss violence in rap music, and how it connects positively and negatively to communities. Slightly hidden is a campaign sign for when Che unsuccessfully ran for Alderman of Chicago’s 20th Ward in 2011. Most importantly, the basement holds memories of Che’s estranged father, Brian—it is the home Brian grew up in, before leaving behind responsibilities of fatherhood to vanish into the city's homeless underground. But 25 years later, this is now Che's house, having intentionally purchased it for his own wife and two children, prepping it for some emotional refurbishing.

In this often-fascinating documentary that's genuinely orchestrated by the entertainer and community figure, this process includes him reuniting with his father and sharing it with the world, which is where Ricki Stern and Anne Sundberg ("Joan Rivers: A Piece of Work") come in. After Che filmed himself meeting his homeless dad in a Chicago library, going out for catfish and then refusing to help get his drunk dad some liquor as a parting present, the two directors came on board to track Brian's journey, and Che's life story.

In one half of the project, Stern and Sundberg's unobtrusive cameras illuminate the steps to recovery from homelessness with Brian's journey, as he moves from standing outside shelters at night to the city's A Safe Haven Foundation and beyond. These scenes are bolstered by Brian's unflinching on-camera charisma, whose peppy joie de vivre seems uncompromised wherever he is, but never too comfortable either. With complicated steps along the way "In My Father's House" is a sturdy, informative (if not sometimes procedural) documentation of the recovery process from homelessness.

However, Sundberg & Stern's film is even better showing a man who looks like he has his life now together meditating on issues outside of anyone's understanding—his past with the ruthless music industry, and his own struggles with fatherhood. It's fascinating and necessary to hear "Mr. Blue Collar" himself (a self-designated nickname from his failed debut 2006 album, "Blue Collar") talk openly about how he had money but didn't know how to manage it, the cars and homes he boasted about in songs like "Brand New" or "More" later foreclosed on. And on that same album he displays his issues with women, which almost ten years later has put him in a spot where he's found peaceful love with the very sweet Donnie Smith, but he has estranged children of his own from previous relationships. In one scene, Stern and Sundberg show him rapping to his own album as drives through Chicago, but in the next moment, he's on the phone venting to a lawyer about child support, refusing to face his own fatherhood demands. It's not a charming scene at all for him, just like when Brian's recovery starts to fall apart, but it enriches of the film's wonderful honesty.

"In My Father's House" is deeply wired into the fantasies and contrasting realities of masculinity, as shown through the experience of African-American men living in a cycle of fatherless homes and non-enriching excess, of which the film boasts many fascinating moments where Che's full awareness leads way to great honesty for Stern and Sundberg's assembly. For example, there's a great sequence when Che invites his father and son to talk on Che's radio show about fatherhood. An even more thunderous emotional moment comes when Che is listening (with at least two cameras visibly filming) to a tense young man at a slam poetry session riff about committing violence—once Rhymefest immediately diagnoses his lyrics as an attack on the world for his own issue, the editing doesn't hesitate to show the conflicted youth then truly expressing himself with an eruption of tears. For whatever false notes Stern & Sundberg have in their somewhat regular aesthetic packaging of this story (its hand-holding score especially) "In My Father's House" is nonetheless crucial for the many fantastic moments it captures.

With Brian, Che, and their life themes within this compelling, warming film, "In My Father's House" becomes an open book exploration with subjects who are all the more real for their flaws; their journeys towards sounder lives always captured in motion. Che especially would be a fascinating figure for any documentary, but he's a great life source as someone removing himself from the façade. He claimed to be many things on the album "Blue Collar," arguably stretching his appeal so thin that his unique personality was lost. But his is a story of second chances (he later co-wrote "Glory," the Oscar-winning John Legend/Common song from "Selma"). In one way or another, Che symbolizes that a man isn't bigger than truth—when it comes to sharing life stories, audiences are more likely to find honesty in what they see, not just what they hear. 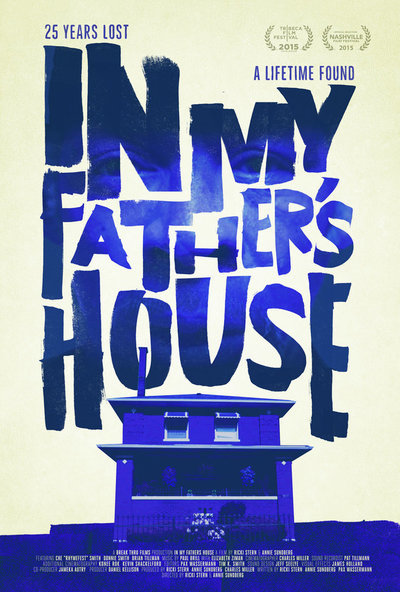