In the iconic ending of Francis Ford Coppola’s masterpiece “The Godfather,” a door slowly swings to a close on the defeated face of Diane Keaton’s Kay. Married to Al Pacino’s mafia boss Michael Corleone, Kay gets lied to and left on the outside of her husband’s business affairs, like countless other women in the gritty crime movies of the ‘70s. With “I’m Your Woman,” director Julia Hart provocatively turns her lens onto women like Kay and opens a new door for them by following one such character primarily. Through “The Marvelous Mrs. Maisel” star Rachel Brosnahan’s inexperienced but quick-thinking Jean, Hart explores how a sidelined woman like her could make sense of her new, perilous, crime-infused reality and sharpen her survival skills while mothering a baby and hiding from bloodthirsty killers.

It’s important to note that Hart has bigger aims here than just broadly challenging the masterworks of a traditionally male-skewing field. If she had stopped there, “I’m Your Woman” would have been painfully limited in its artistic scope, and perhaps even fallen into a faux-feminist “strong woman” trap—you know, by becoming one of those films with a one-dimensional female lead whose strength is often synonymous with her physicality. But thankfully, “I’m Your Woman” never approaches that territory, since Hart (with her co-writer, producer, and husband Jordan Horowitz) concerns herself more with gifting the genre an exciting and under-explored point of view, much like “Widows” recently did in a contemporary setting. And she thoroughly succeeds in her mission, putting forth a fresh noir-adjacent thriller that deals with womanhood, motherhood, and race with a gracious sense of honesty.

Needless to say, this achievement is hardly surprising for a filmmaker who has been steadily building a noteworthy and diverse body of work in the recent years, outfitting familiar genres—from superhero pictures (“Fast Color”) to intimate character studies (“Miss Stevens”) and even Disney fare (“Stargirl”)—with her own unique spin. Vigorously played by the terrific Brosnahan, Jean certainly feels like the product of a similar mindset that yearns to see something original in the commonplace. Before she becomes a “Gloria” of sorts—the savvy, on-the-run John Cassavetes character played by Gena Rowlands—we meet Jean’s soft voice when she gently but matter-of-factly states, “Eddie and Jean met, and fell in love.” But something in her tone tells us promptly that this isn’t a love story she’s about to tell.

That realization intensifies when she casually adds a line about her routine loneliness as the camera finally reveals her—a beautiful vision stretched on an outdoor chaise, wearing a shocking magenta robe and heels, while sipping a drink, perhaps on an unusually early part of the day. Just then, the candy-colored “I’m Your Woman” title vividly appears in an unmistakable ‘70s fashion that would later on be amplified by a pitch-perfect production design of loud wallpapers and earth-toned furnishings, eye-popping costumes, and orange-tinted cinematography, as well as needle drops full of Aretha Franklin and Bobbie Gentry.

With startling economy, Hart and Horowitz trickle details about Jean’s life into the first act. There's something about a baby she was supposed to have with her husband Eddie, who seems to be gone a lot to dubious whereabouts. Jean is not much of a cook—she can barely handle frying a couple of eggs. She puts a premium on her appearance and grooms herself to the nines as her perfect long blonde hair suggests. She isn’t used to taking care of things on her own and doesn’t seem to know a whole lot about Eddie’s shady line of work. Is he a killer? Ignorance is bliss. She doesn’t even question it when Eddie turns up with a baby he calls Harry one day, completely out of the blue. Jean decides to mother him, no questions asked. But she gets tossed into the snake pit one day when a group of strangers barge into her home in a nondescript city. “Where is Eddie,” she asks the men she doesn’t recognize. Soon, she finds herself on the road to a safe house somewhere with Harry and Cal (a magnetic Arinzé Kene), whose job is to protect her.

Hart is skillful when it comes to crafting tense scenarios in languid ’70s settings and cat-and-mouse chases. She harnesses Brosnahan’s vulnerability to startling effect in one of the film’s finest scenes, involving a friendly neighbor of the safe house (Marceline Hugot) who might or might not be in on a ploy to capture and kill Jean. Similarly, she uses the on-screen chemistry between Brosnahan and Kene powerfully, especially when the duo gets stopped by a white cop and the intimidated pair have to pretend like they are a couple. Hart’s subtle (and thankfully non-didactic) exploration of racism in America doesn’t stop there. Once Cal’s family enters the picture—his no-nonsense wife Teri (Marsha Stephanie Blake, the film’s secret weapon), son Paul (De’Mauri Parks) and kindly dad Art (Frankie Faison)—Jean increasingly becomes more aware of her privileges as a white woman. No matter how difficult she thought she’s had it, an eye-opening conversation with Teri illustrates the currencies she’s unfairly got only because of her race.

A slow burn, sometimes to a fault, “I’m Your Woman” proudly revives a type of old-fashioned cinema with something new to say. Along the way, it also gives ample room to Brosnahan to become someone completely different than Mrs. Maisel—a helpless, abandoned woman at first, who gradually grows into her maternal instincts and feminine muscles, learning how to survive out in the brutal world on her own terms. 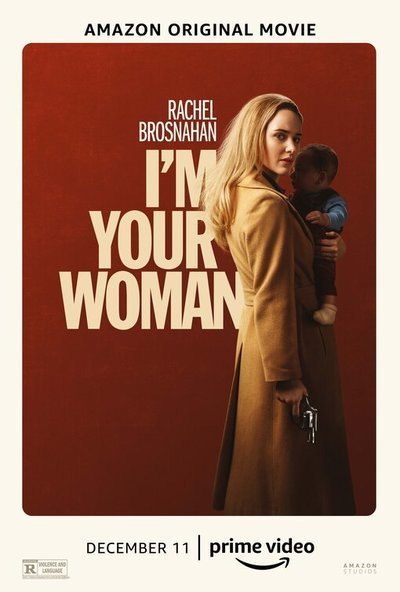