Most heist movies are built on a sheen of cool genius, masterminded by a gang of antiheroes who are typically seeking a kind of justified vengeance. “Widows” is not like most heist movies. The emotional currents that power Steve McQueen’s brilliant genre exercise are different—it’s societal inequity, exhaustion at corruption, and outright anger at a bullshit system that steals from the poor to give to the rich. McQueen’s masterful film is the kind that works on multiple levels simultaneously—as pure pulp entertainment but also as a commentary on how often it feels like we have to take what we are owed or risk never getting it at all.

McQueen opens his film with an immediate boost of adrenaline, dropping us into the latest “job” by criminal Harry Rawlings (Liam Neeson) and his crew (Jon Bernthal, Manuel Garcia-Rulfo, and Coburn Goss) as it goes very, very wrong. McQueen and his incredible editor (Joe Walker, who deserves the Oscar for his work here) bounce us back and forth between the fateful job and quick scenes of introductions to the Rawlings’ crew and their spouses. So we meet Alice (Elizabeth Debicki), a fragile, abused woman whose mother (Jacki Weaver) barely treats her better than her awful husband; Linda (Michelle Rodriguez), a mother of two who is just opening her own store; and Amanda (Carrie Coon), who has a 4-month-old child. Before the opening sequence is over, all three will be widows, as will be Harry’s wife Veronica (Viola Davis).

Not long after Harry’s death, Veronica is visited by a local criminal named Jamal Manning (Brian Tyree Henry), who informs her that Harry’s final job was to steal $2 million from him and his campaign for 18th ward alderman. With the help of his sociopathic brother Jatemme (Daniel Kaluuya), the Mannings tell Veronica that she has to repay the money just as Harry’s widow happens to find her dead husband’s notebook with all the details on past and future jobs. There’s a lot of information on the next job he had planned, one that looks to net $5 million. Veronica gets the other widows together and they agree to do Harry’s next job. They can repay Manning and have some left over to start new lives.

If only anything were that easy in Chicago. I haven’t even mentioned Manning’s competition for 18th ward alderman, Jack Mulligan (Colin Farrell), part of a long line of Windy City politicians, including his racist father Tom (Robert Duvall). Jack is one of those silver spoon politicians who almost feels like he’s owed the office just by virtue of his last name, never mind the fact that he’s facing a corruption scandal that involves grifting from a project that expanded the Chicago Green Line. Jack is the kind of politician who starts a program to put minority women to work by giving them businesses…from which he then takes a cut. Everything comes at a cost in “Widows.” Everything, to a certain extent, is a transaction. The job that opens “Widows” and then Veronica’s decision to use the notebook instead of just selling it pull back the curtain on a corrupt, broken system, one that feels distinctly Chicagoan while also commenting on inequity around the world. McQueen and his team use the city brilliantly, especially in a stunning single take in which we see Mulligan go from a campaign event in his ward to his home, the camera staying outside the car to show us the rapidly changing neighborhood along the commute.

Gillian Flynn’s script for “Widows” brings together many disparate personalities under one umbrella but the differences never feel forced. Only when you sit back and think about it, do you consider that it is likely not by accident that Alice, Linda, and Veronica are Polish, Latinx, and Black, respectively, never mind their incredibly different economic differences—Veronica lives on the Gold Coast while Alice has to become an escort to make ends meet. In part, “Widows” seems to be saying that corruption is a great equalizer, especially among women betrayed by powerful men. When Tom Mulligan says, “The only thing that matters is that we survive,” it’s a line meant to capture how tightly he’s trying to hold on to a white political legacy, but it’s something any number of characters in “Widows” could say. There are a number of great lines like that but McQueen and Flynn are careful to never allow their film to sink into a political diatribe. The dialogue crackles without ever calling attention to itself or sounding overly precious or preaching.

Part of the reason “Widows” stays above the line where it would feel like mere sermon is that it contains the best ensemble of 2018. Viola Davis can do more with a longing, grieving look out a window than most actresses can do with a monologue. Watch the beat where she’s looking out at Lake Michigan and we see her in reflection, an image of her dead husband coming up behind her. It’s almost as if her grief manifested him. And when Veronica’s drive turns from sadness to anger, Davis makes every beat count. There’s not a single wasted decision on her part. It might be her best performance.

She’s matched by a ridiculously talented supporting cast, all on her level. Debicki was great earlier this year in “The Tale,” but this is her breakthrough role, one that nearly allows her to steal the film. Watch Alice’s body language as she goes from a frightened victim to an empowered woman. She never overplays the transformation, but it's impossible to miss. It’s really the rare kind of film for which there are hard to pick standouts. Henry has a couple of brilliant scenes, although many seem to think Kaluuya steals a few from him (I'm not sure I agree. They're both great.). Rodriguez makes one wish she did drama more often. Cynthia Erivo should be a star any minute now. Even small roles like those occupied by Garret Dillahunt and Coon feel “right.” There’s not a wasted or poorly-considered role or performance.

Finally there are the technical elements of “Widows.” It’s not the kind of flashy exercise of something like “Baby Driver,” but the editing here by two-time Oscar nominee Joe Walker (nominated for “12 Years a Slave” and “Arrival”) is just as good. A film with this many characters and themes and plot points requires a master editor to keep it moving, and Walker finds the perfect rhythm. Hans Zimmer’s score is his most subtle in a long time, especially the way that McQueen uses it, holding back on score almost entirely for the first 30-45 minutes, allowing it to bubble up as the heist gets closer, enhancing the tension of the overall experience.

The tapestry that is “Widows” is so deep that it’s easy to miss some of its smaller patterns. There’s a scene in which Jatemme is following Veronica, listening to a report on the radio about Albert Woodfox, a man who spent 43 years in solitary confinement at Angola. There’s a line from Woodfox in the report that McQueen makes sure we hear: “Nothing you do is gonna change your situation.” “Widows” is about both the truth of that and a few people who decide to fight it. 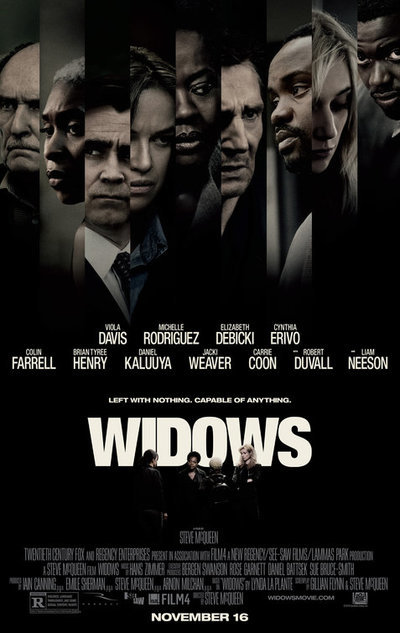 Rated R for violence, language throughout, and some sexual content/nudity.

Writer (based on "Widows" by)