The most exciting thing about Well Go USA’s re-release of “Ichi the Killer,” Japanese cult filmmaker Takashi Miike’s gory, dark gangster/horror-comedy, is that this perversely funny, and unsparingly disgusting genre-melting film now looks and sounds better than it has any right to. The new digital restoration of “Ichi the Killer” allows viewers to notice the film’s seams, especially computer-generated blood spatter, and the fake-looking make-up that define the appearances of lead actors Tadanobu Asano and Shinya Tsukamoto.

This is fitting since “Ichi the Killer” is about the disappointment and potentially seductive power of violence, and the nightmare of being simultaneously drawn in, and alienated by images of men hurting women as a means of indirectly hurting themselves. Mike’s film, a rambling adaptation of Hideo Yamamoto’s manga comic book, follows Kakihara (Asano), a sadomasochistic mobster, and his roundabout quest to find, and either kill or be killed by Ichi (Nao Ohmori), a nebbish and reluctant assassin/serial killer who leaves all of his victims with their guts draped across the furniture, and dripping from the walls.

Miike’s essential gross-out is now paradoxically more approachable than ever since it looks more mundane, surreal, and artificial than ever before. It’s a wonderful poison apple of a gore movie, one whose half-attractive, half-repulsive charms make it a fitting apology and celebration of its director’s frequently jarring use of extreme violence.

The plot of “Ichi the Killer” is kind of unimportant, and ultimately headache-inducing since it’s a long, episodic adaptation of a multi-volume comic book. Still, the film often feels like a put-down of the Japanese mob dramas of the past, and a prediction of the American serial killer procedurals that would follow. All you really need to know is: Kakihara is a social-climbing sadist who becomes increasingly unhinged after his boss Anjo goes missing. In his search for Anjo, Kakihara discovers Ichi’s existence, and decides that he must meet, and fight him. Ichi, on the other hand, is a self-aware, but deeply conflicted hot mess. His handler/mentor “Jijii” (Tsukamoto) uses that messiness to his advantage, and sics the troubled Ichi on anybody he doesn’t like. Unfortunately, Ichi is coming off of his leash more and more lately. And nobody can put him down once he starts biting.

Almost everybody is a funhouse expression of Ichi since he personifies conflicted macho insecurity, a recurring fixation throughout Miike’s best and/or weirdest gangster films, like “Gozu” and “Graveyard of Honor.” Kakihara is basically what Ichi might have become if he didn’t feel so bad about being a monster. So Kakihara is flamboyant, and even sexy because of the (fake) scars on Asano’s face, his self-assured body language, and his character’s charmingly garish punk wardrobe, including a purple satin jacket, and a red flannel suit. But Kakihara’s also pissy and dissatisfied because he hasn’t found anybody that can show affection to him by hurting him.

There are also secondary characters like identical twin crooked cops Jirô and Saburô (both played Suzuki Matsuo),who dress alike because they want to be in each other’s skin. And mob bodyguard Kaneko (Hiroyuki Tanaka), a frustrated father figure who unwittingly stumbles into Ichi, and assumes he’s as harmless as he only superficially appears. And Kaneko’s biological son Takeshi (Hiroshi Kobayashi), who idolizes Ichi because Ohmori’s character saves him from a group of bullies…by eviscerating them with a blade hidden in his shoe. Even Jijii—Japanese derogatory slang for “old man”—is guilty of projecting his desires onto Ichi: he’s responsible for implanting false memories in Ichi’s head in order to convince Ichi that the only way he can express his pent-up sexual urges is through violence.

Unfortunately, Ichi is, despite often seeming introverted and helpless, much uglier than anyone could anticipate. He peeps on women, and matter-of-factly states that he wants to rape some of them. Part of Ichi thinks he’s a victim, but another part knows he isn’t. So he grins a ghastly, hilarious smile before he slices up women who court him, and men who want to be him. But he keeps right on killing because of Jijii’s fake memories, represented through jarring, elliptical flashbacks to acts of rape, schoolyard bullying, and domestic abuse. Picture the grimace-like grin that frequently graces Kyle McLachlan’s face when he plays Dougie Jones in “Twin Peaks: The Return,” and you get the idea of what Ichi’s soul is like.

In fact, David Lynch’s recent projects might be a productive gateway into “Ichi the Killer.” Imagine if Lynch’s equally episodic and surreally traumatizing “Inland Empire” weren’t about Hollywood’s tendency of brutalizing women, and were instead about the self-destructive orbit created by and for manly men. Try, then, to conjure up a film where blood, offal, and other bodily fluids are sprayed across the screen for the sake of alienating you so much that you can’t help but laugh with the filmmakers as they helplessly admit that they, like you, know that you’re participating in a self-perpetuating cycle of transfixing/nauseating violence. This is, after all, a movie whose title emerges from an inhumanly substantial puddle of ejaculate.

“Ichi the Killer” is a grim, filthy comedy that uses horrendous representations of torture, and violence to call attention to the fact that Miike is just another conflicted merchant/consumer of violence. Consider the fact that Tsukamoto is not only a character actor, but also a filmmaker, and real-life inspiration inspiration for Miike. In fact, Tsukamoto’s groddy, seminal avant-garde punk fantasies, like “Tetsuo the Iron Man” and “Tokyo Fist,” are arguably the foundation that Miike’s sizable filmography is built on. In this light, Jijii’s hypnotism of Ichi takes on a new meaning, one that’s confirmed in a scene where mob groupie Karen (Ailen Sun) asks Jijii point-blank if she’s under the influence of his mesmerism. Tsukamoto stares at her, off-camera, for a while before re-assuring Karen that he hasn’t hypnotized her.

With this casting choice in mind, you might start to notice the omnipresent security cameras that everybody is watching everybody else with throughout the film. And you might start to see Ichi’s shocking, irruptive flashback fragments as hallucinatory emissions from a “Videodrome”-like pirate station. Even Miike’s preposterous use of computer-generated special effects looks different in this light, especially in the scene where he awkwardly sutures Tsukamoto’s head onto an unbelievably buff body-builder’s frame frame when Jijii reveals his body after undressing. Whether you love or hate Miike’s film, you won’t find better conditions to watch “Ichi the Killer” under than Well Go USA’s new re-issue. Everything old and ugly looks newer and more depraved. What a pain, such a pleasure. 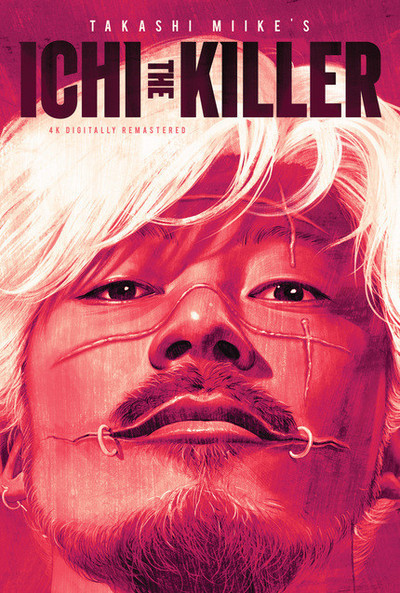 Susumu Terajima as Suzuki (as Sabu)