In "I Declare War," 13-year-olds engage in a daily game of Capture the Flag. With sticks, logs, fake guns, and balloons filled with red paint, each team strategizes and hunts down their enemies. Their playground is a seemingly endless stretch of woods, and PK (Gage Munroe), the leader of one team, has never lost a game. PK's current opponent, Quinn (Aidan Gouveia) appears to be his most formidable foe, which worries PK to no end. Quinn's team includes the only female player, Jess (Mackenzie Munro), and Skinner (Michael Friend), the biggest player. The game takes up the entire running time, filling it with double crosses, heroic saves and feats of strategy more suited to 30-year-olds than teenagers.

My plot synopsis makes "I Declare War" sound like a young adult movie where, for a change, the characters are playing wargames outside rather than on the Xbox. This could have made for a diverting feature, especially with the strategic aspects of Capture the Flag. Unfortunately, filmmakers Jason Lapeyre and Robert Wilson wish to impress far more meaning onto the teenagers' games. "I Declare War" plays like a C-student's final exam essay on "Lord of the Flies." Any interest in the game is overridden by the massive amounts of allegory lifted straight from Golding's novel. As a scenario, unsupervised teenagers running around in the woods syncs up with "Lord of the Flies," especially when their numbers include the weak, the strong, the empathetic and the sadistic.

In place of Golding's murderous sadism is a device so absurdly misused it destroyed all suspension of disbelief. Every so often, the characters' fake artillery becomes "real." The paint-filled balloons, which signify immediate "death" if a player gets splattered with them, turn into actual grenades. The obviously fake guns the kids fire at one another become actual weapons with muzzle flashes and gunshots on the soundtrack. Logs become bazookas and Jess turns into Katniss from "The Hunger Games," wielding a crossbow and shooting an arrow into a kid who makes other kids' heads explode telepathically, like that tire in "Rubber."

I am well aware that these transformations are taking place in the minds of the players, and are not meant to be real events. The bullets never make bloody wounds, even at close range. Fantasy or not, the film is still showing kids under fire and, in the current climate of school shootings, gang initiations and teen suicides, this strikes me as kind of sick. I'd be less bothered if this had a point instead of feeling like a cynical ploy to get paying customers: A glock in a kid's hand is worth at least a few butts in theater seats. Tossing children into war-like scenarios with machine guns and explosions plays like a cross between "Platoon" and that Alan Parker kiddie gangster musical from 1976—it's Oliver Stone's "Bugsy Malone"! Except Oliver wouldn't have the Stones to take this scenario to a dark place that justifies its visuals.

When "I Declare War" does try for some darkness, these elements only muddy the waters of tone. Skinner is clearly a sadist who, after "murdering" Quinn in a coup, takes over Quinn's team. Quinn is "dispatched" because, after capturing PK's best friend and teammate, Kwan (Siam Yu), Quinn wants to follow the rules and "kill" Kwan. Skinner wants to take Kwan prisoner to flush PK out. After Quinn's "demise," Skinner sends his other teammates on missions. He then ties Kwan up and tortures him. Notice there are no quotation marks around the word torture, because it really looks like Skinner is torturing this kid. Are those heavy rocks crushing Kwan imaginary? Is his bloodied wrist, cut with the ropes, imaginary too? How am I to interpret the part where this huge Caucasian actor bares down on a much smaller Asian kid, calling him a "ch—k" multiple times? What do the filmmakers wish to impart with these scenes?

When "I Declare War" ended with a character willing to mutilate his own teammate (but only a minor flesh wound, mind you), I asked myself what the point of all this was. Is this film supposed to be a Vietnam allegory? A dissertation on how childishly absurd war can be? Was it a Golding-like treatise on the Evil that Men Do as played out by teenage boys? And what the hell was the deal with the exotic-looking kid who kept showing up with the husky? He becomes something of a hero but has like one line of dialogue in the entire movie!

It doesn't matter. Everybody survives and goes home, which is the ultimate cop-out for a movie this rife with "fake" violent imagery. "I Declare War" is like high school English class, rife with confusing symbolism and full of sound and fury that ultimately signifies nothing. 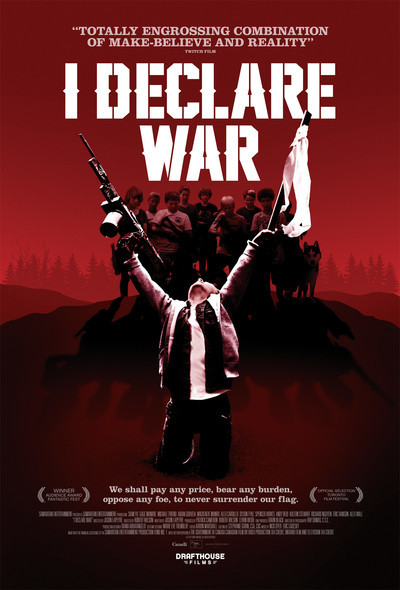