The smooth, clockwork precision of the operation is at once stunning and terrifying.

A doctor selects an elderly patient who looks like a good candidate for guardianship: a person of solid financial means who’s not too old and infirm just yet, but possibly on the brink of dementia. A judge signs a court order asserting that this woman can no longer care for herself and needs someone else to step in and help. A legal guardian shows up at the woman’s house with the document, saying she’s in charge now and insisting she’ll take good care of her property and finances. A driver whisks her away to a nursing home where the manager escorts her to a private room, promising she’ll be treated like a queen.

And once all the pieces are in place, the guardian is free to drain this unsuspecting woman of every penny she’s got.

The grift is impressive in “I Care a Lot,” writer/director J Blakeson’s pitch-black comedy. You’ve gotta say that much for it. But it’s also so infuriating that you probably couldn’t stomach watching the whole thing were it not for the riveting lead performance from Rosamund Pike. Blakeson, whose previous films include the stylish mystery “The Disappearance of Alice Creed” as well as the derivative dystopian YA thriller “The 5th Wave,” has said he was inspired and enraged by stories he read about predatory guardians taking advantage of voiceless victims. Pike’s Marla Grayson is the towering embodiment of unchecked avarice within a system that’s ripe for exploitation.

With her razor-sharp blonde bob, monochromatic suits, and ever-present vape pen, Marla is a woman driven by cold, hard ambition. That much would have been obvious without her opening voiceover, in which she justifies her scam: “Playing fair is a joke invented by rich people to keep the rest of us poor.” During a court hearing at the film’s start, she argues in persuasive, clear-eyed fashion that she can more accurately assess what’s in the best interest of her clients because she has no skin in the game, unlike family members who are fraught with emotional baggage and financial expectations. To her, it’s all transactional. So when she gets the news that one of her clients has died, she pulls his headshot off the wall where it hangs among dozens of others, wads it up and throws it in the trash without a drop of emotion.

“I thought he had legs,” remarks the doctor (Alicia Witt) who serves up her potential marks, for a cut. But soon, another possibility arises: “a cherry,” as they refer to a prime candidate, and the blasé cruelty in Blakeson’s script is the point. It’s meant to make us uncomfortable, and it’s effective. Jennifer Peterson (Dianne Wiest) has no kids, husband or living family, and while she’s suffering from the beginnings of borderline dementia, she’s active and will likely be around for a long time. She’s just a nice, normal old lady, totally functional, living an unremarkable life—but to Marla and Fran (Eiza González), her partner in business and romance, she’s “like a golden f**king goose.”

What these predators don’t realize is that they’ve chosen the wrong prey this time, and that by kidnapping, imprisoning, and bilking this seemingly kindly retiree, they’ve angered some dangerous and violent people. Peter Dinklage is low-key chilling as a volatile Russian mobster with a proclivity for pastries, and Chris Messina has a tremendous scene as his smooth-talking lawyer, who strides into Marla’s office and tries to buy her off before resorting to threats. The snappy and increasingly intense exchange, with both actors matching each other barb for barb, is the film’s highlight.

Blakeson’s come up with such an original idea here, and he’s presented it in a way that’s both slick and vivid. Sure, the blithe, parasitic nature of these characters is disturbing, but the verve of the storytelling on display keeps you hooked, as does the ever-versatile Pike. She’s captivating in her confidence and her ability to outmaneuver everyone, every time. Marla is a despicable human being, and while you won’t exactly find yourself rooting for her to succeed, you’ll at least be curious as to whether she can pull off her most outlandish scheme yet. And then once we realize who Jennifer Peterson really is—and who she’s connected to—Wiest reveals a character who’s hilariously sharp through the haze of medications she probably doesn’t even need.

“Don’t get fooled by old people,” Marla tells Fran as they discover the multitudes their latest ward contains. “Even sadistic, immoral assholes get old.”

But the detached, bemused tone that sustains the film for so long eventually gives way to actual feelings—to its detriment—as this dark comedy steadily turns just plain dark. Pike can do anything, and this is her juiciest role since “Gone Girl,” but “I Care a Lot” becomes less interesting when her character starts allowing emotions like fear to seep through. We don’t need justification for Marla’s heinous acts; simply making her a monster makes a stronger point. And eventually, she becomes superhuman in the face of real physical danger, which we’re just supposed to go with—as if her scrappy, hungry nature makes her a survivor in every situation.

But she does pull off a cool trick involving a knocked-out tooth and a jug of milk that may be useful someday, so if you learn anything at all from watching “I Care a Lot,” make sure it’s this handy (and wholesome) tidbit. 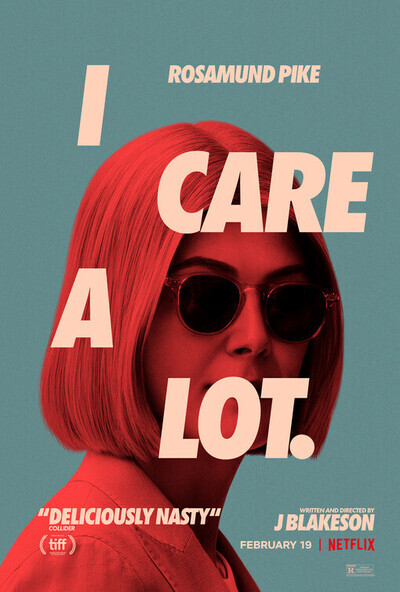