Frustrating but engrossing, and impossible to critique in-depth without spoilers because it's driven by regular plot twists, "I Am Mother" adds another memorable creation to an already packed gallery of intelligent science fiction robots that are as complex as most humans. This review discusses the entire plot in detail, so you'd best bail out now if you haven't seen it, with the assurance that it's worth having an opinion on.

The title character is a humanoid robot with artificial intelligence who lives in a high-tech underground research facility, tending embryos and raising one that she activated and nurtured. This aluminum lady is voiced by Rose Byrne, embodied by Luke Hawker, and rendered by Weta Digital, in a collaborative performance as fully realized any you've seen. The robot's heavy-footed yet graceful motions evoke RoboCop when she's clomping around, and the T-1000 from "Terminator 2: Judgment Day" when she's sprinting.

But as physically imposing as she is, Mother would be nothing without her child (Clara Ruugard), whom she raised from an embryo and addresses as Daughter. Their fraught central relationship elevates "I Am Mother" beyond mere proficiency and makes it memorable, despite a lingering feeling that the filmmakers never quite figured out how to capitalize on their morally and philosophically rich premise, and settled instead for the superficial, cliff-hanging pleasures of "And then this happened..."

The most frustrating thing about "I Am Mother" is the way it favors the unveiling of plot twists over nearly everything else, including characterization, theme, and the related pleasures of world-building. In retrospect, the entire production feels misshapen. It spends more time assuring us of the benevolent relationship between Mother and Daughter than the movie needed, considering that no robot with the body of a combat droid, the voice of Nurse Ratched from "One Flew Over the Cuckoo's Nest," and a single, unblinking, HAL-9000-style eye is going to turn out to be entirely loving and harmless. The movie also needlessly delays the arrival of the movie's second, rival "mother" figure (Hilary Swank's character), mostly fails to develop the idea of her as a plausible rival for the daughter's affections, then effectively waves away what little we were given by implying that she was an early version of Daughter and part of some kind of sinister grand plan.

No sooner are we out of the shelter than Daughter goes back home for some good old-fashioned matricide, and throughout the film's second half, you sometimes get the feeling that the moviemakers are using intimate, intense scenes of suspense and violence to run out the clock and make a movie that's built around just three characters feel "bigger" and more "cinematic." (Alex Garland's "Ex Machina," which likewise had a small cast and was set mainly at a research facility, is a superior example of the same kind of movie, building to a peak of savagery that it absolutely earns, and tying every violent action to the psychology of its characters.)

Pixar fans will raise an appreciative eyebrow at the compressed opening montage, prankishly scored to a cover of "Baby Mine" from "Dumbo" and nodding to both the tearjerking opening montage of "Up" and the wordless first act of "Wall-E" (a harmonic convergence of Disney references). The latter is also set some time after an ecological catastrophe that wiped out humankind, although we get incomplete information here as to whether robots actively caused the death of civilization or just ran rampant in the aftermath. The Swank character's account of robots torturing babies is more disturbing than many sequences where violence is actually shown, and it prepares us for the moment when Mother backs her against a wall and sticks a metal finger in her wound.

That being said, the latter is one of many moments that don't make a lot of sense once you get to the film's powerful and cryptic ending. If Swank's visitor was being permitted to live the whole time because she's part of a larger cycle or plan involving the extinction and repopulation of the planet—and in fact has been left alone all these years for precisely that reason—then why was it necessary to torture her in order to learn the whereabouts of the other humans she mentioned to Daughter?

These and other questions might not loom so large in the viewer's mind if "I Am Mother" had fully delivered on the promise of its setup. If it weren't so concerned with flipping the plot upside-down every 15 minutes (in the manner of a Netflix series, hmmm) the movie might've evolved into an unsettling meditation on artificial intelligence, and the legitimacy of simulated or manufactured feelings. It asks questions that science fiction has been posing for generations now, and that are regularly in the news in this era of increasingly sophisticated AI. If a robot is programmed to feel, and experiences a mother's positive feelings of investment and identification, as well as negative feelings like petty jealousy, rejection and rage, then who's to say that those feelings are "fake"—especially if they lead to actions as inevitably as a human's would?

The movie regularly complicates our feelings about Mother's menacing and controlling behavior by confirming that she truly does feel maternal emotions for Daughter. That these feelings are probably closer on the movie moms spectrum to "Mommie Dearest" or "The Manchurian Candidate" than "Almost Famous" or "Terms of Endearment" doesn't diminish their legitimacy. This blocky droid really does think she knows what's best for her children, even if her logic makes the hair on the back of your neck stand up.

Directed by Grant Sputore and written by Michael Lloyd Green, "I Am Mother" is based (loosely, it appears) on the The Search for WondLa, the first in a trilogy of young adult science fiction novels by Tony DiTerlizzi. It seems as if it is positioning itself as the opening chapter in a series of movies, and it takes care to point out that all three of its major characters are alive at the end, and in no rush to die off.

But is "I Am Mother" really commercial franchise material? There are many moments where it seems to embrace that tendency, but just as many where it seems determined to undermine it. The most obvious example of the latter is the ending. Although it's guaranteed to prompt cries of "I wasted two hours of my life for this?"—people tend to reject any ending where good doesn't obviously win—it's the best thing about the movie, the thing that makes it more than a smashing portfolio of production design or a collection of things that happen. It's an unusually realistic assessment of the endlessly replicating cycles of abuse that have been a common thread through human history (it seems Daughter isn't the first daughter that Mother has messed up). It also acknowledges the relative impossibility of humans defeating a super-strong, super-intelligent robot army that they themselves created.

The script's cleverest twist is making us think we're seeing yet another story where killing the leader of a malevolent force deactivates or neutralizes all of their minions as well (a video game cliche, deployed in everything from "The Phantom Menace" to "Game of Thrones"), only to assure us in the very next scene that Mother is a hydra with a seemingly infinite number of heads, just as she told Daughter.

And what are we to make of that final closeup of Daughter's face? I took it to mean that she's a chip off the old aluminum block: this is a Frankenstein story wherein the monster (Mother) became a creator herself (breeding humans from embryos, in a eugenics operation). Now the creature's "daughter" contemplates activating the embryos herself, possibly becoming the matriarchal leader of her very own nation-state—one that might be capable of opposing the robots that once tormented her kind.

That's all just a guess, of course—the way the movie sets up and pays off its last ten minutes seems an invitation to speculate and project, which is what real science fiction (as opposed to science-fiction-flavored action or horror) does best. I'll be thinking about the substance of this movie, and the dissonant and strangely melancholy notes that it leaves us with, long after the particulars of its plot have faded from my memory. 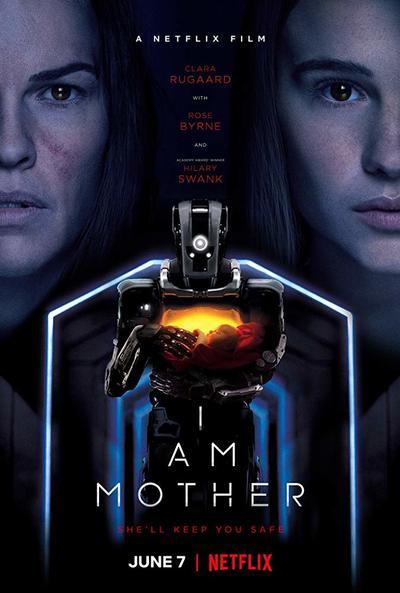