Tim Burton’s “Dumbo” feels like one of the big-eared baby elephant’s early flights: It’s adorable and earnest but it causes a lot of commotion, and it only sporadically, haltingly soars.

Burton’s live-action incarnation of the 1941 animated Disney classic consists of pieces of better Burton movies stitched together. With his oversized ears that make him the subject of both awe and ridicule, Dumbo is a classic Burton misfit—the kind of character the director has focused on in twisted yet kindhearted fashion for the entirety of his career. Specifically, though, the century-old circus setting can’t help but call to mind “Big Fish,” especially with Danny DeVito once again serving as ringleader. “Dumbo” also offers a “Batman Returns” reunion, with both DeVito and Michael Keaton reteaming with Burton, albeit with their hero and villain roles reversed. And the music from Burton’s decades-long collaborator Danny Elfman is frequently reminiscent of Elfman’s haunting score for “Edward Scissorhands.”

All these inevitable comparisons only highlight how inferior “Dumbo” is alongside the best of Burton’s work. And among the recent slew of live-action re-dos of venerable Disney fare—from “Cinderella” to “The Jungle Book” to "Beauty and the Beast"— it will surely end up being one of the least memorable.

There’s simultaneously too much going on here and not enough. Burton and screenwriter Ehren Kruger (who’s written several “Transformers” movies) have significantly expanded on the beloved 64-minute original feature, adding many more human characters to carry along the story. (Both films are inspired by the novel from Helen Aberson and Harold Pearl.) But they failed to develop those characters beyond a few superficial traits, and Dumbo himself—while an irresistibly sweet and sympathetic figure—enjoys an anthropomorphism that’s head-scratchingly selective.

The film begins at the end of World War I, with veteran Holt Farrier (Colin Farrell) coming home to a couple different kinds of families as an understandably changed man. He’s lost a left arm in battle and seen horrors that have shaken him. But he also returns to a daughter and son, Milly (Nico Parker) and Joe (Finley Hobbins), who’ve lost a mother to disease while he was away. And he finds that his circus family – where he was once a famed trick horseman—is a shell of its former self.

Cantankerous circus owner Max Medici (DeVito, with sharp comic timing as always) has sold Holt’s horses to keep the show afloat. Holt now finds himself in charge of the elephants, including one in particular who’s pregnant. But when Mrs. Jumbo gives birth, it’s to a baby boy with plaintive blue eyes and oversized ears who’s immediately shunned and misunderstood for his unusual looks—except for Holt’s sensitive kids, who rush to protect him. (Aspiring scientist Milly is a fine role model for young viewers, and Parker shares her mom Thandie Newton’s quietly assured bearing. But as is the case with all the major characters here, she makes you wish she had a richer role to play.)

But come on. This is “Dumbo.” You know the baby is going to be ripped away from his mama so he can learn to achieve thrilling things on his own. (The early images of their separation, as they intertwine trunks and whimper for each other, may draw a few tears, but “Dumbo” never quite achieves the emotional wallop it seeks.) Milly and Joe figure out that when Dumbo sucks a feather into his trunk, it causes him to leap into the air and eventually fly. But something is just off within the visual effects during this process – something to do with the ear flapping that’s jerky and distracting, and keeps us from being swept up in the grandeur of it all the way Burton surely intended.

Still, legend of the flying pachyderm spreads far and wide—all the way to Coney Island, where amusement park mogul V.A. Vandevere (Keaton) decides to make Dumbo the main attraction at his latest development. The entrepreneur swoops in alongside his girlfriend, the French aerial artist Colette Marchant (Eva Green), to whisk Medici’s entire circus away, promising prominent jobs for the sundry freaks. Keaton’s performance is baffling—he’s clearly a villainous figure but he’s also put a hammy spin on the character that clangs, as well as a vacillating accent and a questionable wig. The dangerous magnetism he’s grabbed us with in Burton films like “Beetlejuice” seems unusually tamped down here. Green is always a goddess, though, and the rare performer who gets the opportunity to show glimmers of an interior life.

Vandevere’s Dreamland—a glossy and futuristic Art Deco extravaganza that bears more than a little resemblance to Disneyland—is where veteran production designer Rick Heinrichs’ work truly springs to life. And the costumes from Burton’s longtime collaborator, the great Colleen Atwood, are at their most dazzling in this section—especially the sparkly and vividly textured creations she’s come up with for Green’s elegant aerialist.

So much work clearly went into building this elaborate and period-specific world that when a massive anachronism occurs in the form of a lame pop-culture gag, it’s a turning point from which the film never recovers—and it’s not as if “Dumbo” had been terribly effective at drawing us in anyway. Burton goes to the joke not once but twice, but it was painfully groan-worthy the first time. And while it's always a pleasure to see Alan Arkin, his shtick as the gruff and impatient millionaire who's invested in the theme park feels so out of place, it's as if he wandered in from another movie.

Lost amid all this empty bluster and spectacle is the sweet story at the film’s core: that of a scared, young boy who longs to be reunited with his mother. As the mom of a nine-year-old boy myself, if I’m not sobbing in a puddle of tears by the end of your movie, you’ve done something wrong. 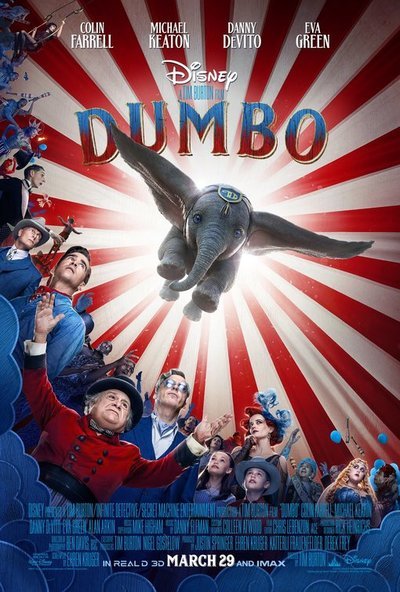 Michael Keaton as V. A. Vandemere