"Not everyone wants to be part of the subculture," insists Michael Glatze (James Franco), in writer-director Justin Kelly's feature debut "I Am Michael." ("I Am Michael" played at Sundance two years ago. Since then, "King Cobra," Kelly's second film, has been released). Glatze is trying to convince his colleagues at the San-Francisco based gay magazine XY that the "gay identity" as it is understood is limiting and should be rejected. His colleagues look at him like they don't know what he's talking about, but it's just the beginning phase of the transformation of their activist friend. Michael Glatze was (and still is) a real person, and he is the subject of "I Am Michael," a quiet film that attempts to understand Glatze's journey to becoming what was called in fundamentalist Christian circles an "ex-gay." Glatze's story always had its fascination to those looking on as it unfolded in real time. What happened? How could this happen?

Michael Glatze was a highly visible member of the LGBTQ community through his work with XY, as well as the magazine he founded that focused on outreach to young people, Young Gay Americans. In July 2007, he wrote an article on WorldNet Daily announcing that he had converted to Christianity and was no longer a homosexual. He still had yearnings towards men but he worked to suppress them. "Reparation therapy" (as practiced by Love Wins Out and Exodus International—both organizations now-defunct and debunked by their own founders) was not part of Glatze's journey, although he put himself through a similarly rigorous process of de-programming. When Glatze "came out" as "ex-gay," he became a hero in Christian, a villain in LGBTQ circles. His transformation was hurtful to those who looked to him for leadership as well as to those who knew him personally, like his boyfriend Ben. Kelly's script is based on Benoit Denizet-Lewis' 2011 New York Times article called "My Ex-Gay Friend". You can see why Kelly was attracted to the story as told there. It's epic in scope.

"I Am Michael" starts with a chilling scene where a clean-cut buttoned-up Michael tells a troubled teen in a counseling session that it's possible to get past one's homosexual yearnings. There is hope, in other words. Cut to an earlier time in Michael's life, where he and his boyfriend Bennett (a wonderful Zachary Quinto) dance at a rave, pop Ecstasy, have a hot threesome. They are, as a friend of mine calls them, "A-List gays." A power couple. Bennett is an architect, and Michael works at XY, arguing in editorial meetings that "being attracted to the same sex doesn't define who you are." Michael and Bennett travel cross-country, making a documentary about gay youth in areas far from liberal coastal hubs. "This is Falwell Territory," Michael says. In one small town, Glatze witnesses a young gay kid comforting a sad friend with a prayer to Jesus on her behalf. Michael is struck by this, it challenges his assumptions that being gay and being Christian cannot co-exist. When he believes he has developed the heart condition that killed his father, his fear of death and his yearning for more from his life leads him into what can only be described as a conversion experience.

Justin Kelly takes a non-judgmental approach to the story, especially by keeping the film solely in Michael's point of view. There's a very effective sequence where Michael, after writing the article announcing he had given up homosexuality, is bombarded with images on his laptop of all of the headlines, Christian sites crowing in triumph that Jesus really does save, gay outlets howling in outrage. Michael reads the reactions, looking freaked out and terrified at what he might have unleashed. Franco obviously has great compassion for Glatze's inner torment. Michael seems lost. An orphan in the world. Looking for a place to belong. Quinto gives a subtle and deeply pained portrayal of a boyfriend who watches his partner vanish before his eyes. You never doubt the connection between the two men, their loving and deep relationship as a couple. It's necessary to get a sense of that so that what follows has the proper impact, and Kelly navigates those waters with his cast sensitively and well. In Franco's hands, Glatze is an inquiring and dogged iconoclast, pre-and post-conversion. As a gay man, he immersed himself in queer theory. As an "ex-gay," he immersed himself in theology. His mindset was naturally extreme, the pendulum swinging far in each direction. It's not difficult to believe Franco as an intelligent and well-read man (despite the fact that he's played so many goofballs).

There are a couple of visual flourishes that are awkwardly executed and unnecessary (heads placed in the far corners of the frame, a couple of overhead shots that come from out of nowhere). There are some issues with establishing chronology as well as location. The action moves from Halifax to Colorado to San Francisco, and it's not entirely clear where anyone is at any given moment in time. Kelly is finding his sea-legs as a director. Kelly spends equal amounts of time with Michael's pre-conversion life as he does post-conversion. The conversion itself is pretty well done, all things considered. (Filming a man suddenly being filled with the love of Jesus is probably quite a challenge.) A fascinating detail of Franco's performance is that before the conversion his face is humorous and beautiful, his smile ready, and even in the midst of an argument he's open to all possibilities. He loves the fight. Post-conversion, a mask descends. There's a constant deeply-grooved wrinkle in his forehead. This is a man who cannot let himself be. Who has chosen to suppress who he is. You can see the price he has paid for that suppression on his face. It's extremely sad. 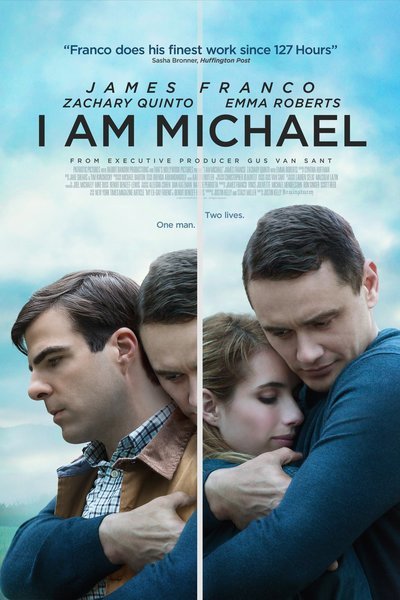 Writer (based on the magazine article "My Ex-Gay Friend" by)