Mike Flanagan’s “Hush,” which premiered at the SXSW Film Festival last month before popping up on Netflix today, is an old-fashioned home invasion thriller that works on its own modest terms. It’s one of those simple horror flicks that’s so streamlined it feels long even at only 82 minutes. It might have worked better as a short film or installment of an anthology series like “Masters of Horror,” but Flanagan has a notable skill in building tension and then just allowing it to simmer. He doesn’t resort to the jump scare tactics that mar so many similar low-budget films. In fact, the most terrifying, shocking moments in “Hush” typically come without the loud music cue or pouncing cat that producers commonly think is necessary to get you jumping. There are choices in the final act that I won’t spoil but really didn’t work for me (the script foreshadows it, which made me dread its inevitability even more), but this is a better-than-average, essentially-VOD thriller for the weekend that could offer a glimpse at the future of festival-to-streaming titles.

Maddie (Kate Siegel) is a deaf-mute writer, living in a secluded home. It’s a set-up that short story master Stephen King would love, and it’s no coincidence that we see his Mr. Mercedes on a dresser. The film’s greatest strength is highlighted in the first scene, as Maddie cooks dinner: the sound design. We hear eggs cracking, onions being sliced, asparagus sizzling on the stove—and then the sound falls away as we close in on her face. She has been deaf since the age of 13, and we get a bit more of her history and the way her mind works when neighbor/friend Sarah comes over for a brief visit (Samantha Sloyan).

After Sarah leaves, Maddie goes back to cooking. We see a screaming Sarah run toward her kitchen door, pounding on it for help, but Maddie is completely unaware, even as a crossbow-wielding maniac (John Gallagher Jr. of “10 Cloverfield Lane” and “Short Term 12,” very good here against type) slices Sarah’s throat about ten feet from her neighbor. He even knocks on the door. Maddie doesn’t respond. The masked killer becomes fascinated with Maddie, and decides he wants to prolong her fate and play games with her. He starts by stealing her cell phone and texting her pictures of herself that night. Then, even after the cat has revealed himself to the mouse, he doesn’t just kill her. In “Hush,” the psychotic killer’s motives are vague, so if he’s just a lunatic killing for fun, why not have a little bit more of it?

Flanagan is surprisingly reserved with “Hush” in that a lot of filmmakers would have fallen back on more tricks to keep the audience engaged in what is a largely silent film. He doesn’t allow the unnamed “Man” to monologue his way through the movie. He doesn’t amp up the score (at least until the final act). He really lets his set-up work for the middle 40 minutes of the film as our only two characters move toward the inevitable climax. And he saves a few surprises for the final act.

Not all of those surprises work. “Hush” works best the less you know where it’s going, so I won’t spoil anything, but there some devices in the finale felt a little cheap to me. They’re minor complaints for a film that really works for what it is, even if it isn't particularly new. We watch horror thrillers like “Hush” not to see the wheel reinvented but just to see it spin well. This movie spins. 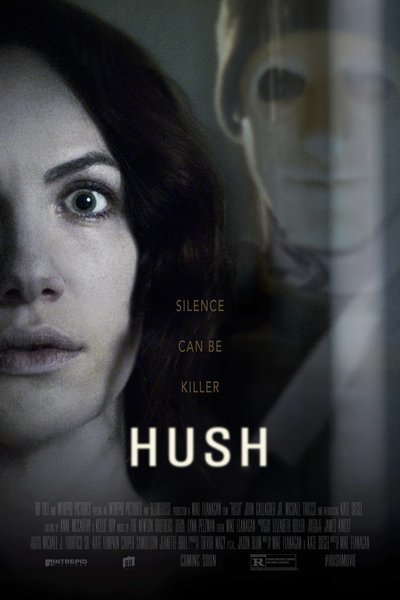 Rated R for strong violence/terror and some language.