Warning: As you may have guessed by its stealth production (no one really knew it existed before a trailer dropped), the less you know about Dan Trachtenberg’s “10 Cloverfield Lane,” the better. It is a film that plays on forced perspective, keeping you in the dark about what exactly is going on. I will tread very lightly in the review to follow, but I won’t be hurt if you want to click away right about now. Come back after you've seen it.

“10 Cloverfield Lane” is a tight, tense thriller carried by excellent performances from John Goodman and Mary Elizabeth Winstead. It has echoes of Alfred Hitchcock and H.G. Wells embedded in a cat-and-mouse game after the end of the world. Without directly acknowledging it in traditional blockbuster ways, it’s a sequel to 2008’s “Cloverfield,” a found footage film about an alien invasion. It’s almost like a spin-off from that film, imagining a different story taking place in a different part of the world but in the same universe. Whereas that movie jumped on a current trend in its approach (found footage), Dan Trachtenberg’s film feels much more old-fashioned in its style, recalling genre pictures of the ‘50s and ‘60s. Trachtenberg and his team don’t explore some of the film’s potential themes as deeply as I hoped they would and it’s less visually engaging than it could have been. But this is rock-solid entertainment, a film meant to keep you guessing and jumping for 100 minutes before it throws you back into the world to argue about its ending.

Once in development under the name “The Cellar,” the script by Josh Campbell and Matthew Stuecken (with a co-story credit by “Whiplash” writer Damien Chazelle) was retrofitted to place it in the world of “Cloverfield.” So, as Michelle (Winstead) drives away from her life and partner, leaving her house keys and ring on the table, we hear ominous reports of power outages on the coast over the radio. These opening scenes are clearly designed to be reminiscent of another story of a woman who left the city for a dangerous countryside, as Michelle packing her bags and Bear McCreary’s overheated, Hermann-esque score will make anyone who’s seen "Psycho" think of Marion Crane in the opening act of Hitchcock's classic. It’s not long before Michelle finds her Norman Bates.

After a terrifying car accident, Michelle wakes up in a barren room, chained to the wall. She soon meets her captor, an imposing figure named Howard (John Goodman), although he claims to be more of a savior than a kidnapper. He saw Michelle’s accident just as the sky exploded. There’s been an “event” outside, and he grabbed Michelle just in time to get her into the bunker he built for just such an occasion. It could be the Russians, the North Koreans or the Martians—but, whatever it is, the air probably won’t be breathable for one or two years. And isn’t Michelle lucky that they have enough food, filtered air, and other supplies in this doomsday prepper’s bunker to wait it out?

They’re not alone. Just before Howard closed the door, a neighbor named Emmett (John Gallagher Jr.) barged his way in as well. Emmett, who has seen Howard building this bunker for just such an occasion, confirms enough of what Howard says that Michelle starts to believe. Well-played by the "Short Term 12" star, Emmett becomes a pivot point for the film, alternating between encouraging Michelle's fears and affirming that Howard is, at least in part, who he says he is. And when she sees something horrible after an aborted escape attempt, she resigns herself to the idea that these two men will be the last human beings she ever sees. But something’s not right with Howard. He’s controlling to an uncomfortable level, especially when it comes to the dynamic between Michelle and Emmett. There’s a fantastic scene of game-playing in which Howard’s misogyny is laid on the table, and the film keeps us guessing as to just what his intentions or end game will be.

That sense of unease is certainly there in the script and Trachtenberg deserves credit as well, but it’s John Goodman’s performance that makes your skin crawl. He captures a man on the edge of sanity for whom control is key. He’s not an obvious maniac, as some other actors would have played the role, but someone who honestly thinks he’s a savior, and thinking that plays into his control-freak God complex. Goodman keeps us guessing, allowing glimpses of the possibly kind man that Howard used to be before all of this happened but even shading those in a sense of conditionality. Howard reminds Michelle and Emmett that he saved them so much that we start to wonder what he’s going to expect in return.

In terms of performance, the underrated Winstead matches Goodman in every way. So fantastic in “Smashed” and “Faults,” this is an actress who only gets a small portion of the attention she deserves. She carries “10 Cloverfield Lane,” conveying Michelle’s conflicted feelings about her predicament and staying so completely in the moment that the tension remains. We only know what she knows, so she has to be our conduit to the film, responding to each new hurdle and conflict as we would.

The final half-hour of “10 Cloverfield Lane” is pretty much going to dominate the conversation around the film. Without spoiling anything, it’s a series of events in which Michelle finds new challenges around every corner (that would only be a spoiler if you’ve never seen a thriller). While I’m not sure it’s as narratively sound as it could have been—and one can see the retrofitting of the traditional thriller into the sci-fi universe—Winstead and the filmmakers keep it working through sheer confidence. Like the opening scenes of the film, the final act is largely dialogue-free. There’s none of that character-talking-to-herself nonsense you see in lesser films that aren’t as sure of themselves when it comes to visual storytelling. So many movies hold your hand as you go over every hill on the rollercoaster. When it gets to its finale “10 Cloverfield Lane” wants you to throw both hands in the air and scream. 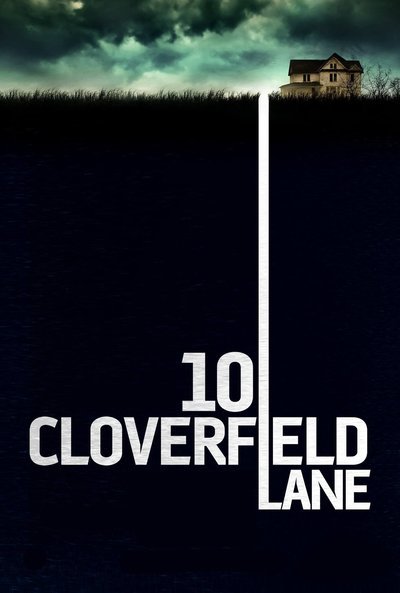 Rated PG-13 for thematic material including frightening sequences of threat with some violence, and brief language.