"Squid Game" Emmy winner Lee Jung-jae stars and directs this week's explosive blockbuster "Hunt," a film about double and triple crosses in a spy game between North and South Korea in the 1980s. About halfway through Lee's film, I realized I had completely lost the thread of who was a good guy and who was a bad guy, but I think that's intentional. This film is about men in well-tailored suits who must constantly determine if the armed fellow next to them is on their side or possibly fighting for the enemy. While some of the action sequences are well-staged, particularly the final explosive one, the convoluted screenplay by Jo Seung-Hee collapses under the weight of so much deception. "Hunt" has some excellent bang-bang escapism, but it's ultimately too shallow to recommend.

Lee plays Park Pyong-ho, a South Korean officer who is seen foiling an assassination attempt in the explosive opening scene, but his fellow officer Kim Jung-do (Jung Woo-sung) shoots the suspect, meaning they can't get to the bottom of the plot. Was this intentional? Is he hiding something the gunman might have revealed? "Hunt" sets up early on that there's a North Korean mole in the operation and wants us to keep guessing if it's Pyong-ho or Jung-do behind the espionage as the two men with a shared violent past also become increasingly suspicious of one another.

That's about it, but it leads to dozens of sequences of shifting loyalties, usually intercut with violent action. Accusations—explosions—accusations—gunfire—accusations ... you get the idea. It all gets a little exhausting, and Lee's non-stop hyperactive cutting and moving camera don't help. He shoots many of the dialogue-driven scenes with the same frantic feeling as the action. This is the twisting narrative of something like "Infernal Affairs" (which was remade as "The Departed") but without the craft and ten times the chaos. It becomes an increasingly difficult film to care about narratively, and Lee's admittedly ambitious eye for action doesn't compensate.

There are reasons to hope Lee's sophomore effort might be stronger. He's clearly a strong director of performers, as Jung is particularly good here—I found his shifting loyalty and presence more interesting than Lee's. And, again, when bullets start to fly, the film sometimes attains a gritty action nihilism like the films from the era in which it takes place. There's a harsh realism to some of the action scenes as bodies fly, and sets get ripped apart by bullets. It's not that modern, overly stylized action aesthetic that was spawned by so many "John Wick" imitators as much as something that feels like it's dangerously unfolding in front of you.

The problem is that it's impossible to even keep track of who's getting shot. When all the bodies have fallen, there are a couple of memorable scenes in "Hunt"—a sequence with a potential defector is expertly assembled, and the final major one is a beauty—but you'll have trouble remembering much of the plot. Of course, that's presuming you could follow it in the first place. 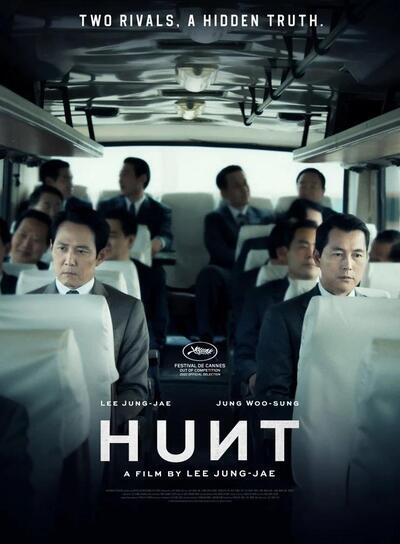