"Holy Hell," a documentary by Will Allen, is an account of an American religious cult as told by a filmmaker who was right in the middle of it in the 80s, and whose skills were put in service of glorifying it. Much of it consists of video footage generated by Allen when he was a member of the Buddhafield, a homegrown religion led by a man named Michel.

Imagine you'd purchased a ticket to an evening with a filmmaker, during which he played some of the video footage he created during his time in a cult, and talked about the circumstances and about his overall experience. That's fine insofar as it goes—it might even be a fun (though perhaps slightly disturbing) night out—but it doesn't really add up to a compelling nonfiction feature, a format that requires some shape, a narrative spine, and a point beyond "here is this strange thing that happened to me once."

Something seems off from the opening moments of the movie, which juxtapose images of Allen's stint as Buddhafield's house director with footage from his childhood as a precocious Steven Spielberg-wannabe, shooting low budget knockoffs of blockbusters like "Jaws" with a Super 8mm camera. (I wouldn't have minded seeing some of those films at length, honestly; they look utterly charming.) It feels a bit too much like a clip reel, advertising Allen as a filmmaker and a nice person.

He talks about coming of age as a gay man and how his mother failed to support him, and then suddenly we skip ahead and he's in the cult. We don't get much sense of how he ended up there, exactly—I mean the dramatic arc of it, the line you can trace from childhood to that moment. Nor are we given enough information and insight to understand what the cult is like on a day-to-day level—what its rules and beliefs are, what the experience of life is like there. Mostly we're looking at footage of people experiencing some sort of rapture in nature. It could be an evangelical Christian group where hands are laid on the body; it could be a bunch of post-hippies tripping somewhere; it's all rather fuzzy. So is Michel, though as the story unfolds we at least get a strong feeling of of how petty, vindictive and controlling he was. (Cult leaders aren't generally known as well-adjusted people.)

Throughout, there's a frustrating sense that a potentially fascinating and unsettling experience has been glossed over. At times Allen seems to be protecting himself from harsh judgment; as Michel's chief PR architect and keeper of legend, executing his requests, he is complicit in some of his former leader's worst behavior, but we don't get a clear sense of why he keep saying yes to his demands, beyond the need to kowtow the leader's charisma. In a first-person documentary where the main character is the storyteller, we really need to get a sense of how every major life choice originates in the storyteller's psychology and personal experience.

We are never really privy to the depth of remorse and shame Allen surely feels at having helped burnish the image of an obviously disturbed and very destructive man. At times, the movie seems to be turning away from its subject, as you might strategically turn away from a guest at a party that you would rather not talk to. This is curious. This film's very existence amounts to an apology and an explanation, or at the very least an inquest into the self. But that should've come across much more strongly, to the point where it was hard to look at the movie because it made us feel incredulity and embarrassment at the weirdest, darkest, most inexplicable parts of our own experience. "Holy Hell" should have dug a lot deeper and told its story with a lot more finesse. What happened? Maybe, after all these years, Allen was still too close to his subject? 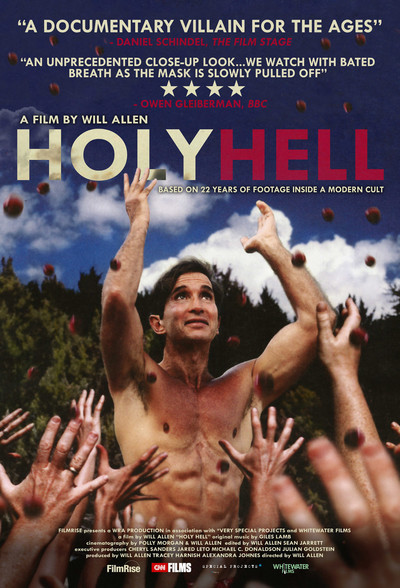