The film version of J.D. Vance's memoir "Hillbilly Elegy" arrives on Netflix so encumbered by cultural baggage and expectations that it's hard to appreciate what it actually is—along with the things it does well, which are numerous, and understated enough to vanish in the haze of the zeitgeist. It's not a great or even particularly distinctive movie, but it's heartfelt and plain-spoken enough that it might connect with viewers whose families have dealt with addiction and recovery, domestic abuse, financial deprivation, and other problems highlighted in the story.

Jumping between 1997 and 2011, often incoherently, "Hillbilly Elegy" is another entry in a sub-genre that could be labeled "Getting Out"—the story of a sensitive, intelligent, often creative person who grew up in deprivation and disharmony, amid generations doomed to repeat destructive cycles of behavior and never leave the place that formed them. It's a durable mode of storytelling represented by countless notable films, from "I Vitelloni," "Mean Streets" and "Cinema Paradiso" to "Boyz N the Hood," "Girlfight," "Real Women Have Curves" and the recent "Mickey and the Bear" and "Them That Follow."

Played as an adult by Gabriel Basso, and as a teenager by Owen Asztalos, J.D. is an eloquent, honorable, decent-souled kid from a dead-end town who will end up attending Yale Law School and finding love with an Indian-American law student named Usha (Freida Pinto, doing the best she can in a supportive girlfriend role that's literally phoned in due to the hero's travel schedule). But even as life successes accumulate, J.D. remains constrained by his culture (working-class-to-poor white, mired in unemployment, and at risk of addiction). Things come to a head when, the day before an interview for a summer law clerk job that could fund his next semester, he's called home to deal with his mother Bev (Amy Adams), an addict who's been in and out of rehab for addiction and just survived a heroin overdose. The past is never past, especially where family is concerned: that's the closest thing to a message that this film is genuinely interested in.

The Vance clan hails from a small mountain town in Northern Kentucky. It's the kind of place where families hold onto totaled cars to strip for parts, and neighbors warn kids headed to the local swimming hole to watch out for poisonous snakes. J.D. uses a distant connection to the Hatfield-McCoy feud at a supper with well-heeled Yalies, literally dining out on a stereotype. He somewhat hates himself when he does this, but figures cultural currency, like the paper kind, might as well be spent. J.D.'s grandmother Mamaw (Glenn Close) made it out a couple of generations earlier and settled in Middletown, Ohio, the type of once-thriving factory town that Bruce Springsteen wrote lots of songs about. But the change in scenery didn't break the cultural cycles that defined her: Mamaw fled a background rife with domestic violence only to get into an abusive relationship herself, and her daughter's addiction has made the next generation's life a living hell.

What's interesting here is that the filmmakers seem to have made a conscious decision not to explain any of this stuff to people who might not already know about it. Directed by veteran Ron Howard—probably the closest thing to an Americana specialist still working in big-budget mainstream dramas—"Hillbilly Elegy" has little interest in making sweeping statements about the historical roots of white, working class, Republican Rust Belt grievances against so-called "Blue America."

That was the source of the book's appeal in the aftermath of Donald Trump's election—the thing that made it a surprise bestseller, and a sort of Rosetta Stone for media pundits trying to understand what happened. It's understandable that the movie version might strike some viewers as evasive for subsuming Vance's wider canvas (whatever they thought of its accuracy) to the subtext of characters' conversations and decisions. The editing sometimes cuts quickly between present-day Middletown, with its boarded-up storefronts and shuttered manufacturing complexes, to earlier eras when there was a sense of economic possibility. When J.D. finds out that his mother is about to be kicked out of the hospital and needs to find an open bed in a recovery facility as soon as possible, he tells family and friends, and their suggestions testify to their own firsthand experience dealing with this problem.

The poker-faced approach often backfires, particularly when "Hillbilly Elegy" focuses on the life of Mamaw, a compassionate yet hardbitten, insult-spewing force of nature. Close's curly wig, huge glasses, deglamorizing makeup and brazen performance choices (Mamaw has a lit cigarette in her mouth at all times, even when stocking a pantry) have been accused of insensitivity or Hollywood caricature. But I suspect this may be a case where Howard, screenwriter Vanessa Taylor, and the cast and crew were so determined to be perceived compassionate that they dried out the inherent absurdity of the situations.

A more challenging (though sure-to-be-controversial) approach might've landed the film in a zone similar to "Precious: Based on the Novel Push by Sapphire," where you weren't sure if it was appropriate to laugh at the borderline-gothic situations depicted onscreen even though the audience around you was roaring. Here's the thing, though: it's actually OK to laugh at outwardly ridiculous real-life horrors as long as you understand and appreciate the circumstances—particularly when it's "your people" who are being depicted, which turns the experience into something intimate, shared and cathartic. Howard and company are tourists here, though, so it's understandable that the movie wouldn't have the nerve to put its foot down on the tonal accelerator and veer  into black comedy and surrealism (even though the movie occasionally cries out for that approach—particularly in a flashback where young Mamaw sets her abusive drunk husband on fire in front of a Christmas tree while "O Holy Night" plays on a radio).

I don't want to invalidate anyone's take on how believable or empathetic the portrayal of Mamaw is, because everyone's mileage will vary. But it's worth pointing out that the obligatory credits scroll of real-life photos of the fictionalized characters confirms that Mamaw did indeed look just like that—and that a friend who grew up poor and white in small-town Arkansas and watched this film with me gasped when Close first appeared. "Oh my God," she said. "It's my grandmother, except for the cigarette."

Likewise, Adams' performance has been dinged for its unmodulated desperation and histrionics, but I felt stirrings of recognition watching her scenes opposite the elder and younger J.D., having dealt many times with a family member whose life is wreck for the same reasons as Bev's. Addicts who are constantly bottoming out, flirting with recovery, and going back to their destructive behaviors aren't known for subtlety.

Although the hero J.D., as written and performed, is dull—this is not a knock against either of the actors, who are doing what the script and director required of them—the dullness is integral to the hero's relationship with most of the characters back home. It's the rocklike, reactive nature of J.D. that makes his escape plausible. Some of the early screenwriting details lay on the "country man vs. the elites" details rather thick—is it really believable that this guy would've gone all the way to Yale Law School without learning which utensil to use for which course, or that there's more than one type of white wine?—but the actors sell it, and Howard's subdued yet borderline-mythologizing approach to J.D. is part of a long snobs-vs.-slobs tradition in American film. I like that the story ends on a slightly unresolved note (immediately spoiled by title cards telling you what happened to everybody), with the hero taking stock in everything he's tried to do for his mother and their extended family, and figuring how far he can extend his compassion before it breaks him. It feels realistic and right, and validates something we know to be true: you can't save others if they won't save themselves.

I wanted a bigger, bolder, more imaginative take on this material than "Hillbilly Elegy" is willing or able to deliver. But there's still a lot to like here—particularly the way Howard and his collaborators keep reminding you that the same incantatory defense mechanism that allows people to endure rotten circumstances—family is everything, and relatives always stick together—is what cements their bondage to dark forces in their lives. At key points in the films, characters are given a choice to do the morally or legally correct thing or stick by their kin while the kin are right there looking on, waiting for the decision. The closeups of the relatives foretell the choice before it's been made. Family ties bind.

Available in select theaters today and on Netflix on November 25th. 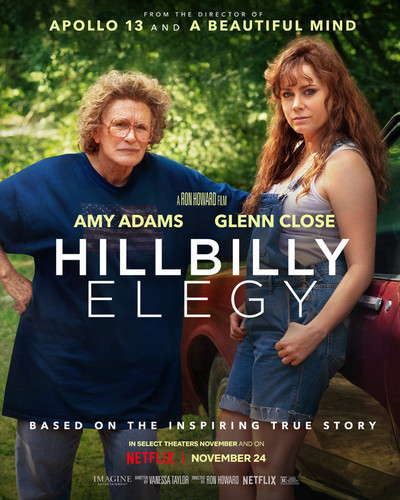 Rated R for language throughout, drug content and some violence.