Watching the original “Hellraiser” still feels like happening upon a profane, if by now familiar, event. In that movie, Barker introduces readers to the Cenobites, a race of God-like sadists who threaten their human victims with sensual experiences far beyond their (or our) tired understanding of pleasure and pain. The new “Hellraiser” evokes Barker’s original adaptation in the same way a good cover song recalls its source material: with love, intelligence, and an inevitably crushing sort of redundancy. Nobody really needs “Hellraiser,” but it can sometimes be fun anyway, especially if you haven’t seen “Hellraiser” in a while.

This “Hellraiser,” made 35 years and nine sequels after the original, feels dutiful and staid where Barker’s version reflected his unique sensibility and preoccupations. The cleverest additions to the “Hellraiser” canon will only be apparent to established fans since the makers of the latest movie awkwardly graft a sometimes-inspired monster movie onto the back of a trauma-focused character study. Riley (Odessa A’zion), a grieving former addict, runs into the Cenobites while chasing after her missing brother Matt (Brandon Flynn), who previously scolded Riley for sticking with her sketchy boyfriend Trevor (Drew Starkey).

Director David Bruckner (“The Night House,” “The Ritual”) and co-writers Ben Collins and Luke Piotrowski’s devoted retread does not, however, meaningfully connect the Cenobites with Riley or her character-defining certainty that she’s the target of forces that are well beyond her control. She’s right, of course, and so is Matt, who disappears soon after he and Riley have a bad falling out. They argue about Riley’s erratic behavior, which really means her relationship with cavalier Trevor, who drinks around Riley despite her being participation in a 12-step program.

Neither Trevor nor Matt’s relationship with Riley develops much over time (it’s 121 minutes long, people), since so much of the plot concerns the arrival and eventual disappearance of the Cenobites. They chase after Riley because she steals and accidentally unlocks a gilded puzzle box. But Riley only steals the box, which horror fans will instantly recognize as a way of summoning the Cenobites, because Trevor encourages her. Riley also only further entrenches herself into the Cenobites’ story—which connects the box with its previous owner, the elusive rich guy bohemian Mr. Voight (Goran Visnjic)—in the vain hope that mastering the box will bring Matt back to her.

The remaining characters in this new “Hellraiser,” including Matt’s boyfriend Colin (Adam Faison) and Riley’s roommate Nora (Aoife Hinds), only have personalities enough to react to whatever circumstantial peril arises from Riley’s quest for answers. That general lack of personality wouldn’t be so bad if there wasn’t so much dead air throughout—seriously, one hundred and twenty-one—which mainly gives viewers time to wonder who exactly these new Cenobites are and why their opaque personalities now have all of the charm of well-restored hand-me-downs.

Granted, the Cenobites’ redesigns make them look appropriately unnerving and they are thoughtfully presented here as inter-dimensional sharks who establish their reflexive cruelty by lazily circling about Riley and her friends. Bruckner, who’s already confirmed his reputation for effects-driven shock scares in his two previous features, confirms that again here with a few memorably upsetting moments. (I did not expect to see a REDACTED enter REDACTED’S REDACTED.)

Bruckner also confirms what his strong, but not-all-there previous feature, “The Night House,” suggested as far as his casual indifference to character and narrative continuity. Even the agonizing dispatch of Serena (Hiam Abbass), Voight’s weary assistant, seems inconsequential since her personality is neither reflected in establishing scenes nor in her seemingly interminable showdown with the Cenobites. It’s always nice to see Abbass pop up in English-language productions, but the poor woman can only do so much with a supporting character who’s more of a prop than a person.

Still, there's a chance you’ll enjoy Bruckner’s “Hellraiser” if you’ve seen or care for Barker’s “Hellraiser.” This updated version doesn’t hang together very well from scene to scene, and it doesn’t really enhance Barker’s original character concepts, which were really only ever great plot suggestions to begin with. But there are, however, enough pleasurable callbacks and suspenseful moments to keep you waiting expectantly for something to happen. 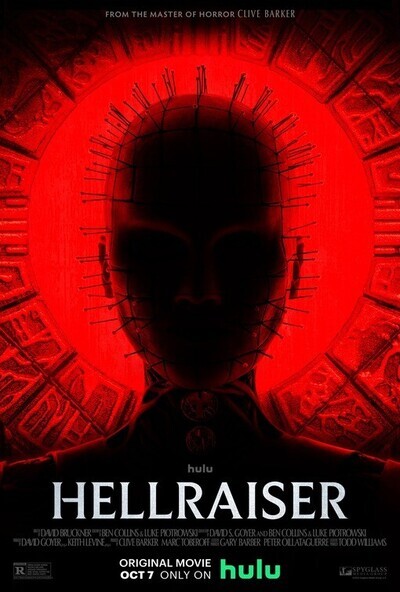 Jamie Clayton as The Priest

Jason Liles as The Chatterer

Selina Lo as The Gasp

Zachary Hing as The Asphyx