The atmospheric but threadbare male bonding horror flick "The Ritual" is so well-directed that you can't help but groan at its lightweight script's many little inadequacies. This story, about a hike in the Swedish wilderness that goes horribly awry, doesn't need much polish or depth to be effectively moody. Indeed, director David Bruckner (the better segments in horror omnibii "Southbound," "The Signal," and "V/H/S") deserves praise for conjuring a moody atmosphere throughout this otherwise inert genre exercise.

But screenwriter Joe Barton, adapting Adam Nevill's source novel, uncharitably distills many of his working class alpha-male characters' motives to pointless yelling and brooding. This is a problem since "The Ritual" is a character-driven piece, and then a scare delivery system after that. And if you want to care about the film's testosterone-fueled heroes, you have to care about grief-stricken bro Luke (Rafe Spall), and his ongoing quest to forgive himself for doing nothing while best friend Rob (Paul Reid) was killed during a liquor store robbery. Unfortunately, none of Nevill's characters want to think or feel anything beyond a point, making "The Ritual" a tedious hang-out session starring a group of stereotypical tough guys who sometimes die horrible deaths.

When Luke's journey begins, he's flashing back to Rob's death. Luke hides behind a shelf of bottles as his friend is mercilessly beaten to death by a pair of nervous thieves. He wakes up with a start to find himself in Sweden's famous wilderness. After day breaks, he resumes trudging up-hill both ways with college buddies Hutch (Robert James-Collier), Phil (Arsher Ali), and Dom (Sam Troughton) in order to pay tribute to Rob, whose last wish was to go on a hike with his best mates into secluded, misty, tree-lined Sweden. So they go, cursing manfully all the way. The one thing that Luke and his buddies don't talk about is the only taboo subject on all of their minds: Luke's involvement in Rob's death.

The fact that these guys are all emotionally constipated wouldn't be so annoying if they didn't always justify making obnoxiously contrived decisions. Dom's got a limp? Better take a short-cut through the dense woods, or else he won't stop whining. There's a creepy abandoned house in the middle of the woods? Stop asking questions, and help break up the furniture for fire wood. We all blacked out in the middle of the night, and discovered ourselves naked, tied up, and/or wounded? I don't want to talk about that, what good's talking when we have to get back to Swedish civilization! Follow the compass or take a mysterious man-made trail? I'm shouting louder than you, so it's trail time!

Look, none of these decisions are completely unimaginable. But they're unbearable when lumped together, and constantly rationalized through pouty, all-caps dialogue.

Barton doesn't just make his reluctant outdoorsmen shut each other down any time a moment of introspection presents itself. He also makes Dom, the only character with a modest emotional range, seem especially whiny and annoying. This is mostly because Dom is the least bro-y of Luke's friends. He has a wife, knows his body well enough to be familiar with its regular stress points, and has glasses. He's sensitive, and in this movie, that's a bad thing. It means that Dom also has a reputation for arguing about everything, and is therefore the only friend who explicitly blames Luke for Rob's death. So, when Dom is confronted by a supernatural life-or-death situation, Dom inevitably behaves selflessly, and tells Luke that saving yourself is the right thing to do when faced with an impossible fight-or-flight response. This one humanizing moment is hilariously meager given how insufferable Dom is throughout the rest of the film.

But then the needlessly drawn-out macho conclusion arrives in time to drive home an especially obnoxious trope: men who bully, fight, and punch their way past their feelings are somehow more fit to survive than anyone who thinks, or feels their way into a problem. "The Ritual" is, ultimately, a lousy movie where man tries to not feel guilty, then encounters his sublimated emotions in the form of a strange wood-land happening, and then must fight his way past those knotty emotions. Bruckner does a fine job with the film's scare scenes simply by emphasizing rustling leaves, flashlight lens flares, and oh yeah, a giant monster that actually looks creepy. But Barton's grating dialogue (actual line: "Your ritual begins tonight"), and thin characterizations, make "The Ritual" the most disappointing kind of bad horror movie: the kind that's too smart to be this dumb. 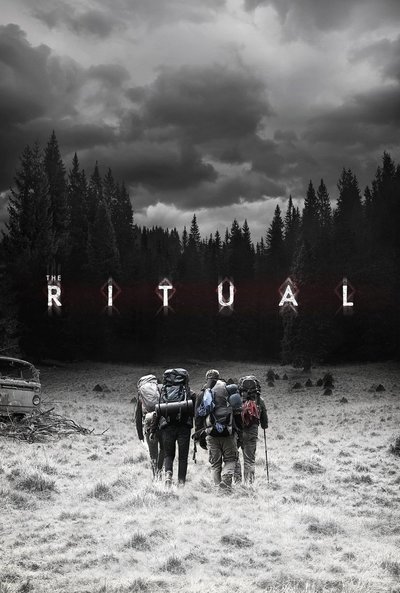