If fashion designer Charles James was a master of the structured aesthetic, then Halston—born Roy Halston Frowick in Des Moines, Iowa in 1932—was a maestro of fluidity. “His clothes danced with you,” says Liza Minnelli in Frédéric Tcheng’s gripping documentary, articulating the revolutionary craftsman’s gift for flowy bias-cut silhouettes best. “It was a dress just because of the way he cut the fabric,” we are told later on about the technique of the renowned designer, who not only understood women’s bodies, but also honored their modern-day priorities through the free-spirited late-1960s, 1970s and beyond.

Telling a thoroughly researched rise and fall story with artistic flair and a noir-esque cinematic mystique, “Halston” starts as an intimate investigative study of a pioneer who made a splash into the Disco Era, putting American fashion on the international map in a massive scale. Beginning his career as a milliner in Chicago, and then continuing at New York’s high-end department store Bergdorf Goodman in the 1950s, Halston left his first real mark on fashion by designing the deeply influential pillbox hat First Lady Jacqueline Kennedy wore during the presidential inauguration in 1961. He then moved onto opening his first salon—a design Mecca with notable celebrity clients—launched his ready-to-wear line, and ventured out to other subcategories, like a best-selling perfume with a signature teardrop bottle. It was an unstoppable climb that crowned him as America’s first “celebrity designer,” especially after a now-iconic 1973 fashion show at the Versailles.

The scope of history and the breadth of involved subjects here make for an intimidating undertaking. But writer/director Tcheng proves early on that he is the right man for the job to steer “Halston” away from a standard-issue snooze. With other fashion-focused documentaries already under his belt—he co-edited Matt Tyrnauer’s “Valentino: The Last Emperor” in 2008, co-directed “Diana Vreeland: The Eye has to Travel” in 2011 and most notably, made a solo debut with the terrific “Dior and I” in 2014— Tcheng knows how to excavate the exhilarating aura of this alluring yet superficial world with all its massive egos, fake accents and era-defining gambles. To plunge the audience into the suspense straightaway, he accessorizes Halston’s story with a compelling framing device, inventing a fictional archivist (played by Tavi Gevinson) going through company records. This approach could have easily become a superfluous gimmick—and perhaps it is, as Halston’s story is rich enough even without these outside embellishments—but Tcheng commands it skillfully, weaving the archivist’s scenes into his film in a seamless fashion.

Tcheng indulges in the brand’s and its creator’s prosperous good times for nearly half of the movie, before a number of poor business decisions (derived from an insatiable appetite of control) paved the way for their unfortunate fall from grace. In these earlier segments, “Halston” luxuriates in the refinement and nostalgia of attractive runways and exclusive parties of the sexually liberated '60s and '70s, with a dizzying wealth of sensational archival footage that spans glamorous nights at Studio 54 and Truman Capote’s Black and White Ball. Dressed exclusively in the designer’s creations for a time (including when she accepted her Oscar for “Cabaret” in 1973), Minnelli is among the most legendary talking-head interviewees of Tcheng’s film. Others include The Halstonettes: an array of famed models in Halston’s inner, trustworthy circle (with the likes of Marisa Berenson, Pat Cleveland and Karen Bjornson), filmmaker/friend Joel Schumacher, designer Elsa Peretti, fashion historians as well as numerous past assistants to the designer.

As Halston’s success leads the way to uncontrolled expansion, “Halston” gradually rips its way into an examination and critique of capitalism with the right amount of shock and intrigue. From that regard, Tcheng almost accidentally hits upon a steady and all-too-sensitive contemporary nerve, by unearthing subtle connections between yesteryear’s corporate greed that gobbled up niche outliers without regard for their legacies and its present-day iterations that plague today’s increasingly monopolized cultural and media landscape. The most disastrous turn for the label, as Tcheng outlines, happens when Halston—now increasingly difficult and bullying, according to his interviewed colleagues—decided to partner with JC Penney in 1982, going from “class to mass.” A marketing decision clearly ahead of its time—today, Target and H&M frequently collaborate with the likes of Marni, Balmain, Proenza Schouler and such—the mass-market cross-over didn’t bode well with the luxury industry back then.

Assuming a more somber and respectful tone from this point on (especially after Halston’s battle with and eventual death from AIDS gets braided into the story), “Halston” slowly morphs into a tragedy, eulogizing not only a fashion genius who transformed the look of glamour, but also an inimitable, self-made gay talent who faded away before his time, along with countless others of his generation. Compared to the inherent compactness of “Dior and I” that crystallizes Dior’s collective craft and process under its new creative director Raf Simons, “Halston” is vast, and therefore, less of a thrill to watch than the real-life “Project Runway” challenge thrown at Simons. But it will be no less breathtaking for fashion enthusiasts, and anyone dwelling in the tricky intersection of art, history and commerce. 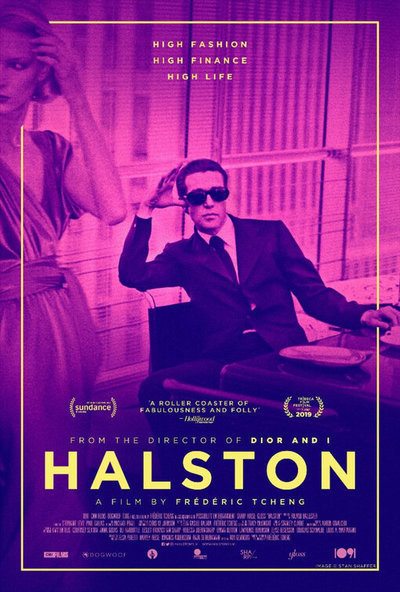 Halston as Himself (archive footage)

Liza Minnelli as Herself