It’s actually a wonder that Raf Simons agreed to be the subject of the documentary “Dior and I” in the first place.

The Belgian fashion designer, who had just taken over in 2012 as creative director at the venerated house of Christian Dior, was tasked with putting together his first-ever haute couture show in just eight weeks, an enormous undertaking which usually requires five or six months.

But Simons shies from the spotlight under ordinary circumstances. He is no Karl Lagerfeld – nor is he John Galliano, whom he replaced after Galliano was arrested and dismissed for an anti-Semitic tirade a year earlier. When the big day finally comes to display his debut collection, Simons has no interest in stepping out before the glittering, admiring crowd to bask in the customary applause, and you can feel him squirming as he’s forced to be photographed alongside movie stars like Marion Cotillard and Sharon Stone on the red carpet.

Where he is comfortable –- and where his vision and authority are quite clear – is behind the scenes. And that’s where French filmmaker Frederic Tcheng spends the majority of time in his eye-opening, solo directing debut. (He previously co-directed the fashion documentary “Diana Vreeland: The Eye Has to Travel.”) Regardless of your own sartorial savoir faire, you’ll walk away from Tcheng’s film with massive appreciation for the amount of work that goes into making something look elegant.

“Dior and I” refers to the connection between the 47-year-old Simons and the late, master designer, which the film reveals through narrated segments from his 1956 memoir, “Christian Dior & I.” The parallels are many. Both men share a preference for the quiet company of a few trusted friends. Both ponder their outward persona versus their true selves. Both fret about dealing with the press.

But the title also could be interpreted as the connection between the longtime employees of the house and their departed master, whose ghost they swear lurks in the hallways and workrooms. (Tcheng illustrates this notion through artful, haunting nighttime imagery.) These veteran seamstresses and craftsmen, some of whom have worked for Dior for 40 years, feel a dedication to perpetuating his legacy and an emotional bond with the products they create.

Tcheng gets a little inside baseball at times, but he also manages in quick, graceful ways to explain why certain elements matter to the layperson. Longtime fashion writer Cathy Horyn, then with The New York Times, describes how “Raf wasn’t the obvious candidate” because he’d been known primarily for menswear and a minimalist aesthetic through his previous work with the German fashion line Jil Sander. The Dior look, meanwhile, is all about femininity, romance and a shapely silhouette.

Simons’ challenge was to honor the traditions of the influential house but also implement his own ideas and designs to provide a modern edge, and to achieve it within the high-dollar, high-profile realm of haute couture.

“Dior and I” intimately demonstrates the tricky balance between art and commerce, between perpetuating a mythology while attending to the bottom line, and doing it with the pressure of a ticking clock. As one of Simons’ top lieutenants, do you make sure your gowns are ready in time for the collection, or do you jet from Paris to New York for a fitting with a client who spends hundreds of thousands of dollars each year to update her wardrobe?

But the film also shines a light on the toil it takes to create a look that’s effortless – the meticulous structure and painstaking detail that can make a gown float ethereally. Simons added an extra layer of pressure when he got the wild idea to create dresses inspired by the abstract paintings of his longtime friend, American modern artist Sterling Ruby, which required a complicated, decades-old thread-printing technique. His other out-of-the-box (and outrageously expensive) demand was to rent a Paris mansion for his debut show, then cover the walls of each room with different kinds of fresh flowers. The result is breathtakingly vibrant.

Still, although he’s on camera nearly the entire time as a commanding creative figure, Simons the man remains elusive. We learn much more about his longtime right hand, the flirty and charming Pieter Mulier. (It probably also helps that Mulier primarily speaks French; Simons, meanwhile, speaks the language imperfectly but earnestly when he nervously first meets the members of his atelier.)

“Dior and I” won’t tell you much about Simons’ personal life, or his family, or where he lives, or why he does this, which ultimately makes it difficult to connect with him. (Interestingly, a little online research reveals, he started out as a furniture designer.)

Simons is all business. But when the tears flow at the end of his first show, there’s no denying their authenticity in an artificial world. 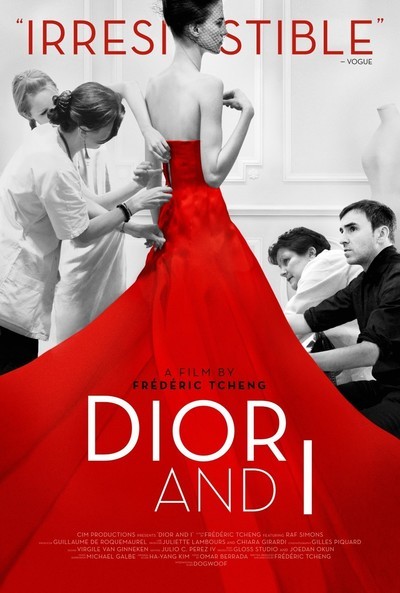